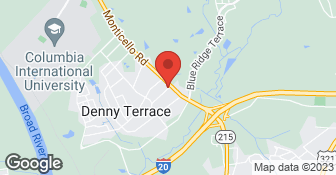 Dedicated to doing high quality work at an affordable price. No other employees. No sub contractors. Charges by the job. Travel/trip charges may apply outside of Columbia....

We specialize in all phases of lawn maintenance, routine mowing services, mulch spreading, yard clean ups, and more! We guarantee your satisfaction, and we won’t leave until the job is done right. We pride ourselves on the quality work we provide, while delivering great customer service! Check out all the services we offer below and call -or- click to schedule a free estimate today!  …

I should have known better. About five years ago, Bruce was a subcontractor on our kitchen renovation. His job was to paint the cabinets matte black, no brush strokes. His work was sloppy - visible brush strokes, paint on appliances - and slow. We stopped the work and hired a new painting company, whose work was quick and perfect.In November 2011, we needed several rooms and the exterior of our house painted. Our tileman recommended Bruce. I didn't realize it was the same guy till he showed up for the estimate. He pleaded for a second chance, claiming that personal issues had affected his earlier performance. We agreed. He painted the walls of two interior rooms. The work was OK - except he wasn't able to match the color we wanted (already in another room). He didn't have or offer to get additional color charts. There were no problems with his work repairing and painting the hall ceiling and painting the stair risers. When he painted the exterior, he let the power-wash solution soak into the rear deck, leaving it blotchy and half-bleached. He them offered to power wash and seal the deck, but we would have to pay for materials - I am sure we wound up paying more than that. He also left two of our halogen spotlights on the lawn overnight, where they were ruined by rain. The ones he bought to replace them did not match the others, so we had to buy four additional lights. He said he would install them, but always found a reason he couldn't (forgot his ladders, ran out of time, and so on). When we decided to paint a third room (a bathroom), I went to the paint store myself and found the right color chart, so at least the third room got the correct color. However, Bruce's prep work was, again, sloppy: it took three tries to sand down patches so they didn't bulge; paint drips from the last paint job were left showing, instead of sanded down; he didn't tape over a counter, so the line where the paint meets the rim is wavy; he left splatters in the bathtub and lint embedded in the wall paint; and, worst of all, he screwed a toilet paper holder into dry wall, didn't affix the screws properly, and the thing keeps falling off (he claimed the toilet paper holder is defective; it is not). We also wanted two bathroom vanities painted and the doors re-drilled for concealed hinges. Bruce said he knew a carpenter who would re-drill the doors. He removed them in January and requested a check for $150 for the carpenter. We were very clear that the only reason we were bothering to paint the cabinets was to upgrade to concealed hinges. Otherwise, we'd replace the cabinets. Bruce went ahead with the painting without checking that the carpenter could, in fact, re-drill the doors. It turned out the carpenter couldn't because of the doors' design. But we didn't know this, because Bruce disappeared for almost three months. He didn't return phone calls. We finally called the tileman and asked him to intervene. Bruce then called, saying he had a pinched nerve in his neck. When we asked about the doors, we found out that the carpenter had returned the doors for the bathroom cabinets and refunded the money to Bruce. We asked that he bring a check and the doors back to us. He hasn't done this. The last we spoke with Bruce was three weeks ago. He does not answer his phone. He does not return our calls. We're out the money we paid him for work that he couldn't complete, we have two sets of cabinets with no doors, and he has kept money that he should have returned to us. We are hiring another painter to repair the bathroom drywall he messed up and a handyman to install the outdoor light bulbs. So much for giving someone a second chance.

Description of Work
Bruce Collins painted the walls of three rooms, repaired and painted a hall ceiling, painted stair risers on main staircase, painted the exterior of the house, cleaned and power washed and sealed a deck.