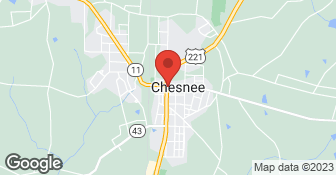 Beginning on the corner of Highway 11 and 221 in 1952, Watson & Son Furniture was the Goodyear and Hotpoint Dealer. Later in 1954, furniture and toys were then added to what was then called, Watson Tire Company. Walter Lynn and Kathryn Watson (our grandparents) were the founders and owners of what was later called Watson’s Furniture Company. Located in the same building was the family owned Watson Insurance Company which is still serving the community today. It is presently located in the original store location

I would buy from these guys any time. Usually have the best prices even on name brand items. Very friendly and knowledgeable. BUT, I wouldn't use them for installation. They don't have their own employees for installation, but instead "refer people." But you would think a business of over 60 years would only refer the best. Again, the ONLY complaint with the store is that they refer someone to install my $5000 worth of appliances that obviously didn't know what they were doing. After 14 wash cycles in the dishwasher, the wiring and one of the circuits were fried. I called the install guy back and told him, it had to be install issue because the minimal time used and it smelled Hot. He insisted it wasn't an install problem that I had to call a technician and he refused to come. When the technician arrived and did his diagnosis, He determined indeed that the unit was wired and installed improperly and basically I footed another $275 out of pocket to re-wire and re-install properly which included a part that was fried. This may not have been fault of Watson's? But it was did by the guys they referred. Very disappointed that a company that size and volume wouldn't check out their installers for better quality. And then I also requested that they not refer them any more until they make my refund for bad services good. I just feel I didn't get the great customer service as expected from this company. I will buy from them again, But will NOT use them for any sort of install work as I can't trust their workmanship from their referrals. Was actually contemplating hardwood floors and got a great quote from them, But am now afraid to go with to so will go with the 2nd quote.

Description of Work
I bought 3 large very expensive Electrolux Appliances from them. They are very nice, down to earth and very friendly. Even their prices are top notch. Can't complain about any of that.

No response from Watson's Furniture Poor customer relations, poor business ethics Will exhaust all available avenues to get this made right Social and news media, small claims court; whatever it takes for justice

Everything went well. The process I had to go through to pay them was hell because of it being rolled into my mortgage and they were very patient with the entire process and situation.

Description of Work
I bought some appliances and carpet from them. They installed fridge, stove, washer, dryer and carpet in 3 rooms.

I am not positive of the exact price the people from Watson s Furniture had charged me, but I do remember them being very reasonable. They did a great job throughout the entire installation. I never found any staples lying around or anything else that you might expect to see after a job like that. They are a company I will be keeping well with.

WATSON'S FURNITURE CO is currently rated 3.3 overall out of 5.

No, WATSON'S FURNITURE CO does not offer eco-friendly accreditations.

No, WATSON'S FURNITURE CO does not offer a senior discount.

No, WATSON'S FURNITURE CO does not offer warranties.