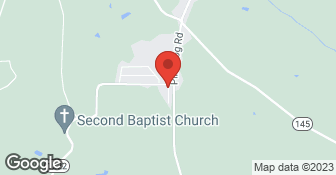 2 EMPLOYEES. NO SUBS. COST IS DETERMINED BY THE JOB. TRAVEL CHARGES MAY APPLY. DOES PICK UPS & DELIVERIES IN AIKEN COUNTY....

When I called Eddie, he returned my call in a couple of hours. I explained the problems that I was having with both my lawn mowers. He said that he was out of town and would call me when h got back. He did call, and he said that he thought he could fix them with no problem. He gave me directions to his shop and gave me a time to come by. I could not find the shop, but I would turn around before I got there unknowingly because of the long distance. I almost gave up, but I drove until the road almost ended. The shop was there where he said it was. He looked at the mowers and told me what he suspected to be the problem, but that he would call me with an estimate before any work was done. He called just as promised and told me the problems and gave me an estimate. I decided to have one mower repaired and it was not worth it for the other one. He called me within a weeks time to tell me that the mower was ready. When I got there it looked like it had just been pulled out of the box in the store. The price was exactly what he quoted me. He cranked it up in my presence and told me if I had any problems just to contact him and he would make it right. It was about a week later when I actually cut my grass, and it cut better than it did when I bought it brand new. I called to thank him and to take my mother's mower to him for service/repair. Once again he did an excellent job in a timely manner. I wish all businesses were this way. Any small engines that need repair or service, he has got my business. Thank you Angie for a superb referral. It was worth every mile that I drove, and every penny that I spent.

I called Eddie on Tuesday around 4 o'clock. He returned my call within 2 hours. I explained to him that I had been having trouble with my riding mower not engaging and disengaging the blade (in laymans terms, the blade wouldn't turn because there was no tension on the belt by the idler pulley). I also told him my push mower had excessive vibration when pushing it and I would like a general tuneup on both mowers. He told me he would pick them both up from my house the next day between 5 & 6 o'clock. He was right on time the next day, he arrived by 5:40 and loaded both mowers. He said it would take a few days for the repairs because he had other mowers he was already working on that he had picked up. He picked up both mowers on Wednesday evening and had both repaired and delivered back to me by the following Tuesday. I tried the push mower and the vibration was gone (the old blade was bent). My riding mower works like brand new. I am very pleased with the work that was done.