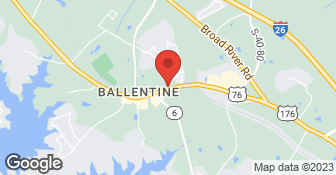 We Love To Make A Splash we take most credit cards...

Bosket and Ruff Enterprise LLP is locally owned and operated with over 30 years of experience. It's our reputation of quality work, professionalism, and customer service our customers continue to rely on us for their all of their home needs. We don't leave until you're satisfied! Please be sure to give us a call or click for a Free Estimate today! We look forward to hearing from you soon  …

All Star Concrete provides the customers with a skill group of experienced concrete finishers. We are know for our hard work, and dedication to the job at hand. All work is scheduled to be performed in a timely, and orderly fashion. We accept all major credit cards, also provides discounted services for seniors. Additional DBA - Allstar Concrete Construction.  …

Proline Paving And Concrete, offers asphalt repair and maitenance from sealcoat, striping, milling, asphalt repair and new install we have been in the asphalt field for over 20 years. Proline also offers concrete repair take and repair or new installs, patio car port pads and more give us a call for your free estimate today for all your asphalt or concrete needs thanks for looking and we look forward to meet with you. God Bless  …

Great in the beginning. Ryan was enthusiastic and agreed to all terms. Signed contract. Then when it came to billing, he had evidently cancelled credit card because it would not process. I called him and he said it was something he would handle but never did. So I send him a bazillion texts requesting him to respond but he never did. Also sent emails and called again without any response.

Description of Work
Requested to advertise within our premier publication within a gated community (Governor’s Grant) and then failed to follow through [signed contract].

Again you can't make every one happy this guy just pissed off because he didn't get his commission on this deal because I backed out I would do business with this company N2 publishing this company and (Member name removed) is a scam do not use this man or company if you do you will get harassing text messages every minute I was getting a text then he goes on our face book page to bash our company this guy and his company are a joke all this over a half page ad in some subdivision flyer and because I decided to back out it wasn't worth the money they where charging buyers be ware this man is a scam and so is his company
1.0

did well at first then the pool was out of code by 7 in and it had to bee pulled back up, at that point it took 3 weeks to get him back to our house to do the job and it is still off by 2 ins and the concrete looks horrible, it is two different patches and does not match the seams are bad the concrete slopes too much and the after 4 months from beginning to end we are still having suction problems and Ryan the owner and guy who did the work personally will not return phone calls or texts and when we last talked he actually said " Look I have paying customers and my guys need to be doing work where I make money, not saying your not paying customers but I cant make any more off you so I will get to your issues when I can". DO NOT USE THIS MAN OR COMPANY! I have pic prove if any one needs it call me!

I have given the (member name removed)'s more time and attention than they deserve we did have a problem with the deep end of the pool I was out of code a couple of inches so we went back out and dug up that end of the pool and reset it and put a new deck down over the whole pool so it would match I have done more than expected for these people and whatever we do they are not happy with and in the very beginning when we found out the pool was off I offered to pull the whole pool up and they told me no and I ask them several times that day and they kept telling me no. So a couple Weeks went by and they decided they wanted me to fix it so yes it took me a little time to get out there and fix it and that's what we did I also bent over and told them that I wouldn't charge them for there last payment for the pool and for the extra concrete I let them have for free but yet they still are not happy this just proves that some people you can't make happy no matter what you do. But I have pictures to show how the pool looks now that we are done.