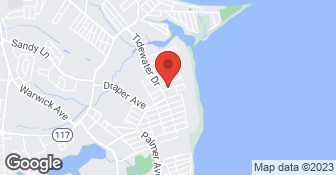 We are a family owned business and have been servicing chimneys in Rhode Island for over 20 years. We maintain a CSIA national chimney certification and are registered in RI by the Board of Contractors and carry a RI Decorative Hearth License. We don't offer billing, we take payment by cash, check or credit card at the time of job completion....

I called and left a message but never got a call back. I therefore hired another company.

I remember your name on caller ID. Someone else's name and number was given in the message. We called that person back and left a message. For the record though, we do not service your area anyway.
5.0

I was in trouble. Fireplace insert was being installed and found the past chimney cleaner didn't do a very good job. Need someone immediately. We had such a good experience with Classic Chimney that I called on a prayer. They were able to free Greg's schedule and got me serviced later that day. Installation was completed same day. Mark and Greg were able to make a big problem go away the same day. THEY ARE GREAT!!!

Description of Work
Emergency cleaning before fireplace stove insert installation could be finished that day.

Mark and Greg were great and gave us positive, solid information that we were able to use. We now know what to do and how to do it. We will definitely use them whenever we need our chimney swept or have any chimney or fireplace problems.

Description of Work
We needed a second inspect of our chimney and fireplace because we were still having problems and questions after another company cleaned our chimney.

The work was done very professionally, and neat and tidy. Which is especially important when you are having soot and ashes removed from the hearth of a wood burning fireplace. all of the work was done well. Additionally, A screw was mounted to help wire the fireplace flue damper open in the future as needed. Then, that same screw was painted black so that will not be visible in the future. I highly recommend Classic Chimney Services. Jim Ganung

I had earlier gotten a quote. It took them from November 8, 2013 to January 15, 2014, which is when they came out and installed new flashing. They were supposed to come back in the spring and do the other half of the job, which was to repair and repoint my chimney, but they never came back. Their final price was $4.00 higher than what they had earlier quoted. For the re-flashing the work was fine, but then, he only did half the job. In my mind, he failed miserably. It was not a total failure because they did that one piece of work right, but clearly, it was not a good job. They gave me a quote price on work they did not do. It took them two months to get there and do that work. It is terribly unprofessional not to show up and finish the job.

During one of the worst winters in recent Rhode Island history, had the unfortunate problem of my furnace turning off because the gas sensor detected carbon monoxide. Turns out, the chimney had a blockage of nesting materials from some critter from years before. The furnace repair man found the debris at the bottom of the chimney and did clean it out. That was extremely nice of him since it was not furnace related! I called Classic Chimney, who had done the chimney inspection on the house when I purchased it in 2012. Mark came quickly (that day!) and inspected the bottom part of the chimney that the furnace company cleaned out. He said there is a "jog" in the chimney that hid the blockage, which is why it wasn't visible before. But, the main issue was there was no cap on the chimney - there never had been! He quoted me $375.00 to install the stainless steel cap. It was early winter, and rainy and raw, but on the first day with no precipitation, Mark was back installing the cap. I think I waited a week. After this horrible winter, I could see the mortar breaking out among the joints of the stone in the chimney. I called Mark back who looked at it and provided a quote for "up to $500.00" to repair the mortar. He is backlogged because of the bad spring, but I know he will be back as soon as my turn comes up and he will do a good. job.

Description of Work
Install a cap on the chimney of a 1938 colonial home.

Thank you for your review! Yes, it certainly was a bad winter. Glad we could help.
5.0

Offered lots of advice on how to make our fires better.

he was on time, and completed all work in quote. The guy even worked ( on the ) roof in bad weather to get the job done. cleaned up when finished and had a good attitude the whole time. I needed to write a post dated check due to a pending settlement, and it was a surprise to him. although apprehensive, he accommodated me.

I was extremely happy with the job Mark did cleaning my 2 chimneys. He was very thorough, cleaned everything up and explained the condition of my chimneys in great detail. I didn't feel pressured to purchase further services, at all. I had used another chimney sweep in the past who charged a lot more and was very dire in his estimation of the state of my chimneys. Then I received a cost-estimate that was around $15,000 to "fix" them. Mark was very punctual, professional and honest. I am writing this review a year later because I logged into Angie's List to find his information again. I'd like him to do some more work.

Description of Work
Cleaned my chimneys

Thank you so much for your kind review! We appreciate our awesome customers!
5.0

We have used Mark Putnam of Classic Chimney for over 12 years. He is very thorough in the services he provides. Our chimney cleaning is not a simple task since our home is taller that most and the steepness is also a factor. Over the years we have had this company do more than the basic chimney cleaning. We have used Classic Chimney for the installation of a chimney cap and other related chimney maintenance. Very pleased and will continue to use this company.

Valter Rego Masonry has been in business since 2000. We offer great quality work. We return our call as soon as possible. No job is too small. Complete landscape construction. Feel free to call with any questions, we will be happy to help you. Forms of payment; Cash or Check. November special! 10 % off labor on Basement stucco reinforcement and fireplace surround. Project must be booked in the month of November. Customers please mention coupon at the time of appointment.  …

Family Run since 1976. Specializing in quality service starting from the first phone call all the way through to the service performed in your home . Cleanliness and prompt honest service is our specialty. Your safe with us.  …

We offer chimney sweep or cleaning, any repairs having to do with chimneys. We specialize in installing liners. Repairs include installing caps and screens, crown repair, waterproofing, flashing and leaking problems, repointing, rebuilding the chimney, fixing cracks, repairing or rebuilding the smoke chamber & fireplace rebuilds.

Classic Chimney Services is currently rated 4.7 overall out of 5.

No, Classic Chimney Services does not offer free project estimates.

No, Classic Chimney Services does not offer eco-friendly accreditations.

No, Classic Chimney Services does not offer a senior discount.

Classic Chimney Services offers the following services: We offer chimney sweep or cleaning, any repairs having to do with chimneys. We specialize in installing liners. Repairs include installing caps and screens, crown repair, waterproofing, flashing and leaking problems, repointing, rebuilding the chimney, fixing cracks, repairing or rebuilding the smoke chamber & fireplace rebuilds.

Are there any services Classic Chimney Services does not offer?