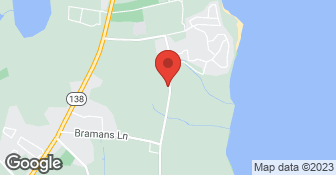 Owner operated. Uses subs for trades. Cost is determined by the job. Travel charges may apply. No service charges. May contact through email....

I didn't have him do any work. I think he charged around $25 for the estimate. He was a very nice person and I had no complaints. I will probably hire him to do it. I really don't know that much about him at the moment.

Description of Work
I got an estimate from Brian Fiske for a new wood floor.

A trusted friend, who already had been contracting work out to Brian, recommended him to me. Brian has been a homebuilder in southern New England for nearly 20 years. Brian came to the house and surveyed the situation. Thankfully, Brian had talked me out of an alternative solution that wouldn?t have solved the entire problem. After spending an hour surveying the room and asking me several questions he indicated that the job would require about a day and half. I thought , okay, this should take approximately 12 hours to complete. Brian came over a couple of days before the job and spent an hour surveying the room with his surveyor?s equipment, taking measurements and writing them down. My wife and I watched and commented amongst ourselves, if Brian is this thoughtful when he executes his work we should be okay. Eventualities are never pondered. We discovered a few problems just prior to execution that would require additional time to complete the job. However, the end result was a properly and expeditiously completed project, and only requiring two more hours than Brian had originally estimated. Brian and his crew were punctual and they cleaned up the job site after the first night and completely at the job ' s end. Lastly, Brian returns all phone calls generally with a couple of hours or worst case, within 24 hours. I would highly recommend Brian Fiske for any home renovation project. I?m going to need window replacements and a kitchen redo in the future and I intend to have Brian do the work.

Description of Work
I required a sub floor be built in my entryway atop a cement pad so I could install wood flooring. Installing engineered wood flooring was something I could handle. Building a sub floor on a cement pad, with a 2-inch pitch over an eight-foot span was beyond my skill set. This project was also going to require three new thresholds and cuts to my two exterior wooden doors

Enhance your curb appeal with roofing services by Midland Roofing. For 45 years, our family-owned business has served customers throughout Rhode Island and Southeastern Massachusetts. We've built a reputation for quality craftsmanship and unbeatable customer service. Free estimates are available from our owner. All clients work directly with the owner on roofing proposals before, during and after installation. Since 1975, our mission at Midland has been to provide the best customer service and quality workmanship in the industry. As a Certified GAF Master Elite contractor, we stay on top of the latest trends and styles, and we can show you a wide variety of options available.  …

Greater Boston Roofing is changing the roofing industry by bringing professionalism, integrity and a customer-centric approach to roofing sales and installation. Alex and Enda’s strategy has exceeded all expectations. In less that one year more than 800 homes in Massachusetts and their happy owners were enjoying the benefits of clean energy and beautiful new roof.  …

Care Free Homes, Inc. is a home improvement and construction company with over 40 years of satisfied customers. We have been an A+ rated, accredited member of the Better Business Bureau for over 25 years and carry an extensive list of industry credentials and awards. We specialize in exterior home improvements such as roofing, siding, windows, and construction of decks, porches, pergolas, and sunrooms. We service residential homes, condos, and small to mid-size commercial properties throughout Cape Cod, Southeastern Massachusetts and Rhode Island. Homeowners are invited to speak with Stephanie Pickup if they would like to discuss a potential project and/or schedule a free quote. Financing options are available for qualified homeowners. Find additional customer reviews by exploring Care Free Homes, Inc. on Google, Facebook, and Houzz. Be sure to check out our blog http://carefreehomescompany.com/blog/ for the latest promotions and featured projects. For home improvement inspiration - follow Care Free Homes, Inc. on Facebook, Twitter, Pinterest, Instagram, and Houzz!  …

Insured
All statements concerning insurance, licenses, and bonds are informational only, and are self-reported. Since insurance, licenses and bonds can expire and can be cancelled, homeowners should always check such information for themselves.To find more licensing information for your state, visit our Find Licensing Requirements page.
General Information
Free Estimates
No
Eco-Friendly Accreditations
No
Payment Options
Check
Senior Discount
Ask for details
Warranties
Yes

How is Brian Fiske overall rated?

Brian Fiske is currently rated 5 overall out of 5.

What days are Brian Fiske open?

No, Brian Fiske does not offer free project estimates.

No, Brian Fiske does not offer eco-friendly accreditations.

No, Brian Fiske does not offer a senior discount.

Are warranties offered by Brian Fiske?

What services does Brian Fiske offer?

Are there any services Brian Fiske does not offer?