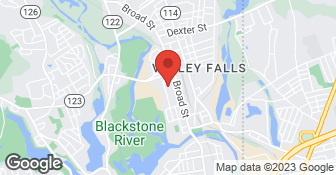 I independently own and operate a 5 star chimney sweep and masonry restoration business. I have been in business for about 20 years now with no comebacks or issues with my work. I am a member of the BBB. Licensed and Insured. I have over 27 years experience in the bricklayers union restoring the exterior of all types of historical high rise buildings. I guarantee good quality work that I stand by. I am an honest, hardworking, and professional person with good morals and ethics, and will go the extra mile to make my customers happy

Provided an estimate. Asked for 50% deposit, which we thought was high, but reluctantly agreed to. As customers, we had follow-up questions about potential extended work, and what might be found when he started the job, etc. He did not provide clear answers. Would not give a clear answer as to how long scaffolding would be up. Husband called to speak to him while he was setting up and clarify a few things. Ron got frustrated, returned deposit and walked off the job. We found another vendor shortly after that who charged the same price, and was in and out in one day.

Called Ron after getting a fairly high estimate from another chimney sweep who told me I needed to replace my old metal liner with a new one, and needed brick pointing as well. Ron answered all my questions, arrived promptly, and inspected my flue. There is no metal liner in my chimney after all, and no need for brick pointing. Needless to say, I'll probably be using Ron to install the liner.

Description of Work
Evaluation prior to gas conversion.

Description of Work
took a long time to complete the job after initially paying half of the money up front he does good work, but in the end, the price was higher than is original quote.

l contacted Ron's Chimney Sweep to clean my flues based on a recommendation from a friend. When I spoke to Ron he was very informative (I was a new homeowner) as well as courteous and professional. He showed up on time and inspected both flues. He told me that one of the liners had been damaged at the top and that it should be repaired, and he explained why. He said that he would do the cleaning that day and to simply call him if I wanted to have him repair the liner- he did not pressure me at all, which was nice. He cleaned the two flues and used a high power vacuum system to remove any soot. When he was done, there was no mess at all, it was very clean. I later inspected the chimney liner myself and saw the damaged area. I contacted Ron and he came out and made the repair. He removed the chimney cap, crown and quite a few bricks... repaired the section of liner, and then put back the bricks, crown and cap. Again, he was on time, very courteous and professional and cleaned everything up when he was done. I will be calling Ron in the future whenever I need the chimney serviced.

Valter Rego Masonry has been in business since 2000. We offer great quality work. We return our call as soon as possible. No job is too small. Complete landscape construction. Feel free to call with any questions, we will be happy to help you. Forms of payment; Cash or Check. November special! 10 % off labor on Basement stucco reinforcement and fireplace surround. Project must be booked in the month of November. Customers please mention coupon at the time of appointment.  …

We have been providing Top Class service to New England for nearly 2 decades. With over 4.5+/5 review on every rating service with nearly 1000+ verified reviews online CERTIFIED is clearly in a league of its own!! As central heating has evolved over the last 100+++ years, many of the venting systems/chimneys have not received proper if any updates. They are often overlooked (out of sight out of mind). In many homes original chimneys were built to be used much differently than what is needed nowadays. As your heating units change- from oil to gas or even coal; or the efficiency/btu output changes; or by adding or removing units, so should the exhaust system/chimney be updated to conform to current units manufacturers recommendations and requirements in order to function safely and efficiently. Many original chimneys are no longer suitable to vent the kind of heating units widely used nowadays. We use only 2-ply smooth-wall stainless steel Flue liners (greatly exceeds all IRC/NFPA requirements), as opposed to the majority of chimney companies that use code-minimum products (single ply or aluminum) for their customers. Although it does meet the minimum code requirements they are inferior in many ways. We use only UL listed material and offer a Lifetime Guarantee on the parts as well as a Lifetime Guarantee on the installation. Due to our volume we are always comparable if not lower in cost to our competitors using cheaper material. Our areas of expertise include: Chimney cleaning, chimney relining, Chimney caps, fireplace cleanings, damper replacement, Crown repair, brick repair, flashing repair, smoke chamber pargeting, Brick sealing, blockage removal, safety inspections, Insurance claim inspections, Oil to gas conversions, safe soot removal, new chimney installation, new fireplace installation, gas fireplace installation, wood burning inserts, wood-burning stoves, pellet inserts, pellet stoves, commercial chimneys.  …

Ron's Chimney Sweep is currently rated 4.2 overall out of 5.