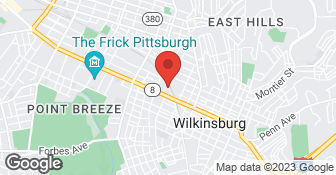 OWNER-OPERATED. USES SUBS FOR LABOR. COST IS DETERMINED BY THE JOB. NO TRAVEL CHARGES.EXTRA $50 CHARGE FOR AFTER HOURS SERVICE. MAY CONTACT THROUGH EMAIL....

We recently purchased our home and needed to have our chimney repointed before our new roof was installed. We worked with Ron at Anderson Chimneys Fireplaces Masonry to complete the job. Initial communication was great. Ron was very responsive and helpful during the quoting and scheduling process. He was extremely honest, always making sure that we got the best value for our money. Mainly due to these positive qualities, we decided to work with him instead of another contractor that had a slightly lower bid. He came out with another helper and completed the job within a day. They ground out the mortar joints, repointed the chimney, and applied a chimney crown. The chimney looks great and seems to be performing as expected. We would definitely recommend working with Ron and his crew. They seem like true professionals and masters at their craft.

Mr Anderson's team did an great job. they worked quickly and finished the job earlier than expected? I contacted him for an 'emergency appointment and he was able to fit me in between other appointments within two weeks.

Ron came out, took a look over everything, told me I didn't have a problem, and I shouldn't spend money on anything. He was extremely knowledgeable and professional. He spent a lot of time going over everything even though he wasn't going to be compensated for selling me work. I found him to be very trustworthy and will definitely consider him should I have work in the future.

Description of Work
I was told by another service provider that I needed work done on my chimney. It was a large expense so I decided to get a second opinion.

Ron was great to work with - he and his crew were in and out of here in 2 days. I had another company come over to look at the job, but when Ron came by he actually got up onto our roof and realized that the problem was bigger than just repointing the chimney (which our home inspector had already warned us about). The other company did not go into that great of detail, Ron took the time to thoroughly explain what was happening and exactly what needed fixed. His knowledge and friendliness won the job, and his pricing was right in line with the other quote. I highly recommend, he knows his stuff! He and his crew left a clean job site, and worked hard to get in and out in a timely manner.

Ron was excellent and we would certainly work with him again in the future. He was knowledgable, responsive, and friendly. It was a tricky installation because of limited space in the basement, but Ron made sure the job got done right. We had a minor issue that we noticed a few days after the installation, and Ron was there the next day to fix it. We would certainly recommend Anderson Chimney for fireplace installation.

Great experience. Guys were punctual, worked nonstop, informative about the process, surprisingly quiet, and very polite. They left the worksite really clean everyday. It was an unfortunate expense right before the holiday, but it helped to feel confident about the work being performed. They showed me pictures before and after.

Description of Work
Pointed four stone chimneys, partially rebuilt one, capped and waterproofed all. Scaffolding was required at each chimney to do the work. They inspected the entire roof, caulked every exposed nail (lots) and sealed flashing at dormers.

Ron is a masonry wizard. I do not use this term falsely. The man knows bricks. Is extremely professional and great to work with. His pricing is fair, his timing is quick, and he seriously gets the job done expeditiously and well. The people who work with him also care greatly about doing a quality job in a quick fashion. He doesn't mess around or tell you one price then charge another. He is an honest person, who does great work and I would use him again, any time I have to do anything with brick ever.

Description of Work
Had a brick wall (old exterior, current interior wall) taken down an a steel beam put in it's place, in steel jacks cast in cement. Had old rotten wood lentils above and below windows removed and replaced with sandstone

We have a large living room fireplace that had obviously been used to burn actual wood in the past, there was also an upstairs fireplace in the office that looked like it used to have some kind of burner in it. Ideally, we wanted the living room to be wood burning and the upstairs gas. We got a couple of companies to look at this and went with Ron Anderson because he really explained what was going on, there was no sales pressure, and his estimate was reasonable. Sadly, we could not burn anything in the living room that would release heat and or sparks in to the chimney (there was evidence of previous small chimney fires, because the smoke chamber was built in such a way that nothing drafted up properly). Rebuilding the firebox and chimney was too expensive for us, so we went with Ron's suggestion of a ventless system. It looks nice and adds some heat. The little gas stove is a cozy addition to the office as well. Ron knows what he's doing.

Description of Work
Installed an unvented gas log set in our living room fireplace, as well as an unvented gas 'wood' stove in an upstairs room in the fireplace opening. Ran gas lines for both units.

They arrived promptly, did their work and cleaned up after they were done. They also provided the brick to fill the openings. The work was very professionall done. Getting in touch was more difficult, I suspect, because this is a small business, one or two man, and the owner does not return phone calls as fast as most people would like. Once we connected, all went smoothly.

Description of Work
Theybricked up two openings in the basement portion of a chimney that were left from an old incinerator and repaired an ash door on another chimney.

Owner of company was professional & courteous enough at the time....but his workers/help was poor. He explained that we could not use our fireplace as it is....improperly vented & unsafe. (We had just bought our home- so that was unexpected & disappointing) Anderson owner gave me a verbal estimate to fix the fireplace & replace the crown on the chimney. Was told that he would send us pictures of the inside of our chimney (which he took at time of inspection) along with a written bid, and recommended replacement products via email. Never heard from him again. Unfortunate, because there are not many fireplace pros in our area; and two years later- we have never had the chance to light up our fireplace.

Local business who cares about quality service and the best prices around. Family owned and operated. 40+ years of service in the masonry and concrete industry.  …

Morow's Masonry has been in business for over 15 years, serving customers in the Western Pennsylvania area. We specialize in all types of construction.  …

At Johnson Masonry Restoration we specialize in restoring residential/commercial masonry work to its original beauty! We offer many masonry related services. We are a small family business with years of experience and pride ourselves in offering the best price for the customer. Some services we offer are; concrete resurfacing. repointing, chimney repairs, acid wash, graffiti removal, weather sealing, retaining walls, lentil repair, parging, chimney sweeping/cleaning, power washing And more!  …

Bonded
Insured
All statements concerning insurance, licenses, and bonds are informational only, and are self-reported. Since insurance, licenses and bonds can expire and can be cancelled, homeowners should always check such information for themselves.To find more licensing information for your state, visit our Find Licensing Requirements page.
General Information
Free Estimates
Ask for details
Eco-Friendly Accreditations
No
Payment Options
Check, PayPal
Senior Discount
No
Emergency Service
Yes
Warranties
Yes

Anderson Chimneys Fireplaces Masonry is currently rated 4.8 overall out of 5.

No, Anderson Chimneys Fireplaces Masonry does not offer eco-friendly accreditations.

No, Anderson Chimneys Fireplaces Masonry does not offer a senior discount.