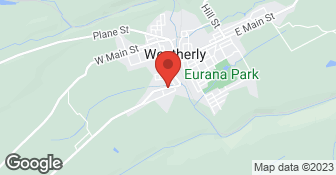 I returned home from work on Tuesday evening (2nd day of project) to find my aluminum siding ripped from the back of my house which was totally unnecessary and caused damage to the siding. I had outlined the opening for the patio door before work which should have been cut out and the base plate could have been attached directly on the siding. (Aluminum siding goes on from the bottom up which means it must be removed from the top down to avoid damage. Any qualified contractor would have known this. The patio door was installed with no header and when I insisted he remove the door and do it right, he walked off the job and never returned. I had two independent contractors check the workmanship and the both agreed, the door needs not only a header but also a bottom plate and jack studs on both sides of the door, non of which was installed. Just nail the door in the opening and try to cover it over before somebody sees the shoddy work. The deck looked like it was build by amateurs, improper deck screws were used and the balusters and top rails were nailed on with a nail gun. The angle cuts weren't true and were filled with saw dust and dirt to cover the bad cuts. Mr. Kieffer left the job (unfinished) on Monday morning, after showing up 3.5 hours late (3 days past his promised finished date), I thought to get more lumber to redo the patio door right, but he never came back. I hired a qualified contractor Mark Kunkel (who really does have over 30 years of experience) to repair the damages to the aluminum siding plus remove and reinstall the patio door proper Now I get a phone message earlier today from Stan K. claiming I broke the contract and he is calling his attorney in the morning. I had issued another check for an additional 25% (against my better judgment) when he asked to for the unpaid balance in full promising I could trust him to finish the job and when Stan stopped work on Monday, I stopped payment on the second check the following day. (after it was clear he had no intention of returning). Guess we will have to let the Judge decide... ( a picture is worth a thousand words and I took lots of pictures). Plus there are plenty of eye witnesses!

Description of Work
Stan Kieffer was contracted to build a patio deck, install a patio door plus pore a concrete pad and stone patio area for Hot Tub/Spa in the back yard of our home in Weatherly. He received half of monies prior to starting and was to receive the balance upon completion of the project originally. (He penciled in 50%, 25% & 25% at some point later) Before the project began we walked the perimeter and I pointed out possible obstacles such as the large tree roots above ground, the up hill slope from one side of the house to the other and the rocky soil. He said he would bring a transit to shoot grade and have a crew of 4-5 workers to excavate the work site by hand before beginning work. He claimed he would prep on Monday and complete the job by Friday, None of which came to fruition, No excavation, No work crew (only 1 helper), No completed patio deck, No proper patio door installation, No stone patio, 1 poorly poured concrete slab (only because I ordered and paid extra for the concrete), No weed barrier under the deck, No proper air space under the deck for 1/3 or more of the deck joists clearly marked "above ground" and some of which are buried due to the failure to excavate, etc... the lists goes on and on, like a perpetual nightmare!

Specializing in Asphalt Services! We always guarantee your satisfaction and won’t leave until the job is done right. We take pride in ourselves and on the quality work we provide, while always delivering great customer service! Check out our services offered, then call --or-- click to schedule a free estimate today! Over 4 generations of Asphalt Service!  …

Your garage makeover begins with our Garage FX® epoxy & polyaspartic flooring. Our installation experts specialize in turning old, dirty, or cracked concrete into a beautiful flooring surface that will make your garage the envy of the neighborhood.  …

How is kieffer construction overall rated?

kieffer construction is currently rated 1 overall out of 5.

What days are kieffer construction open?

No, kieffer construction does not offer eco-friendly accreditations.

No, kieffer construction does not offer a senior discount.

Are warranties offered by kieffer construction?

What services does kieffer construction offer?

Are there any services kieffer construction does not offer?