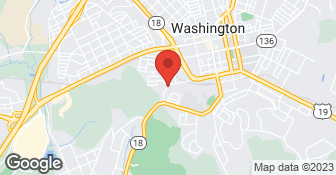 Unfortunately, no work has ever been done for us by Mr. Bowman. In early August 2012, he accepted and immediately cashed a check for the purchase of fencing material (which was not to be ordered until the permit was obtained). Shortly thereafter he called to let us know he had already ordered the material and was awaiting our notification that the permit was ready. Following a delay in getting the permit, we contacted Mr. Bowman and he said he would be starting the job shortly. In spite of numerous attempts to contact him via telephone and email, we heard nothing from Mr. Bowman until a few weeks ago - 10 months after he was to have done the work. In the intervening period, we filed a complaint with the magistrate and took time off from our jobs to be present at the hearing which he did not even bother to attend. A judgement was made against him on May 14, 2013 for the amount of the downpayment as well as magistrate fees. When Mr. Bowman finally did reach out to us via email in August 2012, he claimed to have no knowledge of the judgement against him, and said he wanted to "make it right". The first contact indicated that the fence material was sold or otherwise unavailable. After we informed him that we wanted our money to be returned, he suggested that we cancel the contract we have pending with another fencing company and allow him to do the work as the fencing had somehow miraculously materialized. We have declined his offer to do the work and have heard nothing else from him. Now we must pursue other avenues to try to collect the judgement awarded to us by the court.

Description of Work
Mr. Bowman was contracted to install a fence around the back yard of our new home.

In response to this review, we did receive a deposit of $5000 in August of 2012 to order 400 linear ft of aluminum fencing. Two days after receiving deposit I ordered the fencing and paid for it in full totaling $12,000 I had to pay $7000 out of my own pocket in order to get it all in a timely manor. 1st week of September the fencing was delivered. I contacted the wickerhams numerous times and left numerous messages on cells and at their office With no response. The contract stated that the wickerhams were to have the permit ready by the time the fencing was delivered. Numerous times through sept I contacted the municipal building in McMurray and checked to see if they filed for the permit yet. They never did The contract also stated that one the fencing was delivered i was to have access to the property to complete the project or the contract would become void. Without a valid permit I was unable to start the project. I believe the wickerhams never filed for the permit at that time cause he informed me that he built a shed on the neighbors property. After more calls without response I informed them that the contract was voided and their deposit was forfeited unless they paid me the additional $7000 And I would drop off the fencing. After that my lawyer drew up papers stating that they needed to pay the $7000 within 30 days Or the material would be auctioned off. This also was left unanswered. 30 days later sometime in October. The material was sold for $6000 leaving me $1000 in the negative. Also before the selling of the fencing I contacted the municipal building and there still wasn't a permit filed. In the beginning of December on the 16th. The wickerhams finally contacted me and said the permit was now ready. I informed them that there has been months of messages and letters that were left unanswered and for them to contact my attorney. That was the last I had contact with them, and they never contact my attorney. Mostly Everything in their review never occurred.

At Johnson Masonry Restoration we specialize in restoring residential/commercial masonry work to its original beauty! We offer many masonry related services. We are a small family business with years of experience and pride ourselves in offering the best price for the customer. Some services we offer are; concrete resurfacing. repointing, chimney repairs, acid wash, graffiti removal, weather sealing, retaining walls, lentil repair, parging, chimney sweeping/cleaning, power washing And more!  …

Bonded
Insured
All statements concerning insurance, licenses, and bonds are informational only, and are self-reported. Since insurance, licenses and bonds can expire and can be cancelled, homeowners should always check such information for themselves.To find more licensing information for your state, visit our Find Licensing Requirements page.
General Information
Free Estimates
Ask for Details
Eco-Friendly Accreditations
No
Payment Options
Check, Visa, MasterCard, PayPal
Senior Discount
10%
Warranties
Ask for details

Bowman Construction & Home Improvements is currently rated 1 overall out of 5.

No, Bowman Construction & Home Improvements does not offer eco-friendly accreditations.

No, Bowman Construction & Home Improvements does not offer a senior discount.

No, Bowman Construction & Home Improvements does not offer warranties.