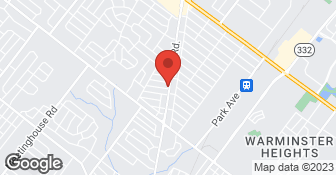 My experience with RJE Home Remodeling is complicated. The management company for my home owners association contacted Mr. Jain to give them an estimate to repair drywall that had to be removed in my basement after a sewer backup. Mr. Jain contacted me and arrangements were made for him to come out. He wrote up an estimated which he submitted to the management company. After several days, he had not heard back and when he contacted them, they told him that they were not going to use his services. Apparently, they were not going to pay to have the damage fixed, which confused both Mr. Jain and myself because they were the one's that contacted him in the first place. So, RJE services were never provided, however, my experience with the company was nothing but positive. Unfortunately, since these expenses are now going to be out of pocket, I could not afford Mr. Jain's services at the time - and have since had TWO MORE sewer backups, so I'm glad I hadn't paid for the work back in July!

They were excellent. What stood out about them is the quality of the work they did, their punctuality and professionalism.

Description of Work
We got a bathroom done by RJE Home Remodeling.

They did a fantastic job. Our house had been damaged by a major leak. They were prompt when we called and patient in figuring out the design. It was a big job and they were pleasant and hard working. They finished in about 2 and ½ weeks.

Description of Work
They remodeled our kitchen and great room.

Our team is highly skilled at variety of trades. Carpentry, Plumbing, Electrical , Hvac, and Demolition/removal. No job is to difficult or BIG. We also do smaller end jobs such as decks, clean outs, moving, landscaping, masonary, roofing, additions and more ! Need a new kitchen or bathroom ? Easy call us now !  …

ImproveRite Home Remodeling is the trusted name for all of your home remodeling needs. We are committed to delivering unsurpassed quality in products, in workmanship and in our service every step of the way. We believe our home remodeling customers are our best sales people. We offer every customer an industry leading lifetime warranty on installation and materials. We are committed to to providing the best value for your hard earned dollars. ASK ABOUT OUR APPLES TO APPLES GUARANTEE!!  …

10 years in the industry, we do it right the first time. We can handle any remodeling or new construction jobs efficiently and neatly!  …

RJE Home Remodeling is currently rated 5 overall out of 5.

Are there any services RJE Home Remodeling does not offer?