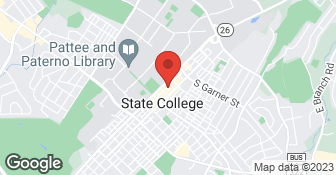 Cost is determined by job....

I was actually late to the appointment, so I called and no later than the second ring the receptionist picked up and told me not to worry that they would still be able to take care of me when I arrived. The waiting area was very nice, and almost immediately after I arrived, the person who would be taking care of both of my issues arrived to take me back to the waxing room. The room was completely private, clean and a nice calming color, not too sterile because I know some people like me find that a bit stressful. Kelly was quick and concise and got my eyebrows shaped practically perfect with little pain and for someone who is highly reactive, as I am, caused little reaction. After she finished waxing my eyebrows she took me a room next door to do my nails. I had originally came in planning to get done a Shellac manicure but she explained to me that there was a newer version by a different company that has many of the same features, not cracking or breaking for about two weeks, but also has many more color options. This option, Gelish, worked great for me and Kelly also helped me pick out some colors that would work for this season and my skin tone. She worked efficiently and we easily made nice conversation throughout the entire process. I already booked my next appointment and there is no way I'll go anywhere else.

Description of Work
I got an eyebrow wax and a manicure by the same person, Kelly, for my first visit to this salon. I have very sensitive skin so normally I'm highly reactive and get extremely red after a waxing but Kelly was gentle and very efficient and within a very short period of time made it so that I got the look I wanted and also caused a minimal reaction. The manicure was next and I had went in with the idea of using a nail service that I had used twice in the past, she suggested a better, newer one with many more color options and was also safer and easier on your skin and nails. I ended up using her choice and loved it.

All statements concerning insurance, licenses, and bonds are informational only, and are self-reported. Since insurance, licenses and bonds can expire and can be cancelled, homeowners should always check such information for themselves.To find more licensing information for your state, visit our Find Licensing Requirements page.
General Information
Free Estimates
Yes
Eco-Friendly Accreditations
No
Payment Options
Check, Visa, MasterCard, Discover
Senior Discount
No
Warranties
No

Looks Hair Design is currently rated 5 overall out of 5.

No, Looks Hair Design does not offer eco-friendly accreditations.

No, Looks Hair Design does not offer a senior discount.

No, Looks Hair Design does not offer warranties.