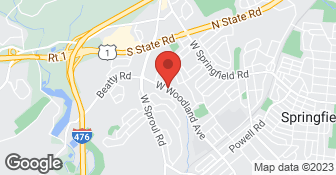 Freshlook Painting will provide your residential or commercial property with a Fresh and exciting look with our high-quality interior and exterior painting. We have a friendly and reliable team who pride themselves on their meticulous attention to detail while improving the look and feel of your home....

no problems at all. Dave was professional, reasonable & on time.

Dave was fantastic - very professional throughout the entire process. He was able to schedule us for a consultation quickly, arrived on time, and got us a quote within 48 hours. He was able to get us on the schedule and complete the work in less time than he estimated. He gave us great advice picking out colors and did a great job color matching our family room and kitchen. Finally, he and his staff were punctual and very clean while completing the job. Would absolutely work with him again for another project!

Excellent job from Dave and crew. Explained everything in detail, answered all our questions. Professional work done. Wallpaper removal can be messy, but not with Dave, very clean and thorough. Highly recommend his work.

Description of Work
Removal of wallpaper and painting of bedroom, also painting banister.

I was very pleased with the services provided by Freshlook Painting. The prep work, painting, and clean up were very professional. Dave assisted with two color selections. He also accommodated my start date requirement and request to add an additional room. A relative highly recommended Freshlook and I did not seek any additional quotes for a price comparison. The estimate was very specific as to work to be performed and prices.

The painters were very respectful of our new home and took great care to not dirty any of it. They were very patient with us as we were a bit picky with some requests. They never made me feel as though we were a nuisance..... until the end. Our dining room had old wallpaper that I feel they under estimated how easy it would be removed. The owner spent nearly a week and several different resources trying to remove the paper. He actually left a small portion of the wall with wall paper and just primed over it. (he did that with my consent) Once he was finished though, the bottom half of the wall was supposed to be white. Since the room's previous color was red, the final outcome looked orange. After 3 visits and 5 coats of paint, he finally decided to prime the space first and then paint. Of course, that did the trick. Also, I am not sure what he did for the ceiling because it continues to bubble. All in all, they were good. I just got the feeling that he was sick of being in our home fixing paint mistakes and the quality of work suffered because of it. He was supposed to come back to the house the third week of July but never contacted us. Because the work was minimal and the owner is such a good guy, we decided to let it go. We would use him again for a smaller project.

Description of Work
Entire interior of home from ceiling to baseboard

Dave gave us a very fair estimate and then did beautiful and thorough work and finished on time. We thought he was great!

I had Dave and his team (Eddie) out to paint the entire exterior of our 3 story 1910 house. This included dormers on the 3rd floor and a wrap around porch (columns, floor and ceiling). It was a big project and took about 3 weeks to complete. He also had to deal with multiple other contractors working on the house at the same time. He was the one I had to worry about the least. He was extremely responsive with any of my questions and always kept me in the loop with what was going on. His estimate came in lower then other painters with were in contact with and I have zero regrets on hiring him. We are planning on having them back to do some interior work. It's great to have found a contractor that I can go back to and not even have to think about hiring anyone else.

Dave worked solo. He was on time the 3 days the job took. All nicely done. Well worth the money for what he had to paint. Came back for touch ups, as needed.

I had an estimate scheduled. When I spoke them a week ago, I told them I specifically asked them if I was too far away; My address was googled and a time was scheduled for them to come out to give me an estimate. I took the morning off work and waited-- nobody ever showed up. When I called them to find out what the delay was, I was told my house was too far away for them to paint less than three rooms. Why did you schedule an estimate then? Vacation days are scare. Thank you for wasting my time.

Description of Work
Painting of bedroom and halls

Hello sorry for the misunderstanding i thought when we had spoke a week ago i had set a time for possibly thurs or fri but i would have to double check to make sure it wasnt to far for us to travel. I had mention i would have to google later to double check distance. You also mention that if it was thursday that you wouldnt be there but your husband would be there since you had work. Your husband did reach out thursday morning which i then told him I apologize for not giving a call back to let you know that i wouldn't be able to get out there.
5.0

Description of Work
Interior of our house had to be painted.

Restoration 360, IICRC Certified, non-franchised, locally owned and operated water damage, flood damage, sewage cleanup, storm cleanup, basement and wall drying company headquartered at 501 Cambria Ave. Bensalem, PA with multiple locations throughout all of our service areas including New Jersey. Standing behind years of experience in the construction industry, we stand behind our work and go above and beyond to take care of our customers. Our 5 star reviews and work ethics make us stand out from the crowd.  …

Waterpro began in 2005 providing emergency water and fire damage cleanup to the Delaware Valley. We are family owned and operated. John and Debbie Sullivan oversee the daily operations. Our dedication to providing red carpet service is extended to each customer. At Waterpro we understand that we are not only restoring property, but we are restoring lives. When someone has suffered a water or fire damage in their home they need guidance and support throughout the whole process. Our well groomed uniformed employees understand that we are not just restoring property, but we are RESTORING LIVES. Every customer is treated with care, kindness and respect.  …

Our name comes from the tradition of doing things in the style of the “old world” – where craftsmen put quality first and took the time to do their jobs right. Our antiquated philosophies are the backbone of our operation: - Respect you and your home by leaving it clean at the end of each day/project - Perform quality workmanship with integrity - Provide unmatched communication, so you know what to expect throughout the process We follow processes for all projects as required by project and product specification. Our “by the book approach” is the foundation of our brand. When you choose Old World Painting, you’re investing in quality work that lasts the life of the paint – or when you’re ready for a new look.  …

Freshlook Painting llc is currently rated 4.9 overall out of 5.

No, Freshlook Painting llc does not offer eco-friendly accreditations.