Decks and Porches
Deck Maintenance
Heating and Air Conditioning
Licensing
No License Required for Trade
Insured
All statements concerning insurance, licenses, and bonds are informational only, and are self-reported. Since insurance, licenses and bonds can expire and can be cancelled, homeowners should always check such information for themselves. To find more licensing information for your state, visit our Find Licensing Requirements page.
Business Details 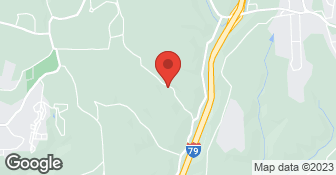 We install Under Deck Ceilings underneath elevated decks to make a nice dry, bright living space . We can add lights and fans during the installation. This area can also be used for storage....

We concentrate on quality service, customer service and pride in our work. We work direct with customers and sub-contract with general contractors.

Dusty and his crew did an amazing job with our deck, replacing an old (and lesser quality) plastic ceiling with his more durable and beautiful aluminum system. Dusty was incredibly responsive, giving us detailed quotes in person and via email. Once his crew was able to reopen for work (he was temporarily closed during the COVID-19 closures), they immediately came out and completed our large deck p...

It went great. Dustin was responsive and friendly. Quote was much less than our deck builder would have charged. We had this done last summer and we have had no issues with it as far as leaking etc. The job took 1 day and he was able to come sooner than originally estimated. He even fixed a downspout that our deck builder had left unattached. Highly recommended.

DESCRIPTION OF WORK
Under Deck Ceiling

From the day Dusty and his associate, Tim, came to install the underdeck ceiling, they worked tirelessly. The ceiling was installed in a day, and the work was done to perfection. We chose the clay-colored ceiling which matched our home exterior very well and is light-colored enough to make the area bright. We decided to also add a light for illumination in the evening. We now have a beautiful area...

DESCRIPTION OF WORK
We had a new deck installed last year that replaced a small porch and steps. The job was perfect except for the dripping after a rain storm that came through the slats on the deck floor. This made the patio messy and algae was beginning to grow there. After seeing an ad on Angie's List for an underdeck ceiling, we had Dusty Hendrickson from Hendrickson Contracting visit us with an evaluation of what he could do to eliminate the problem.

I have been wanting to do this for a couple of years. There is a mother-in-law apartment in the basement of our home and with the new ceiling under the deck, it is like having a covered patio.

We've worked with several contractors recently. The experience with Hendrickson Underdeck Ceilings was absolutely the best.  Communication was excellent. We were told when he would be available, and that is exactly when he came to work on the deck.  It is a beautiful addition, giving us almost another room outside.  We could not be happier.  The quote we received was the best quote out of all the ...

We install Under Deck Ceilings year round.

We are no longer able to continue doing basements, deck cleaning/staining or deck resurfacing. We do not build decks.