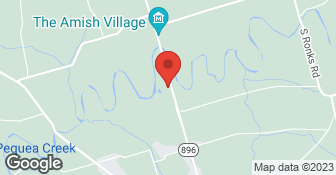 The responsiveness to the request was great. They came out and priced the job within two days of first call. They showed up when scheduled and completed on time. We called to have them come back for some tiles that got chipped and they were there within two days. Get job, fair price and excellent service. We would use them for our next project, the kitchen remodel.

It is the first time we have used them and it was very good. A neighbor had used him and we checked various sources and we were most attracted to this one, and they did a very good job. We also spoke to him about the backsplash in our kitchen but we haven’t done anything about that. They were good in installing it. The installers they sent were very professional about it and worked hard because that is always a tricky one. They had to move the appliances out and put the linoleum in and they did a very good job as far as that is concerned. We were real pleased. The workers were very professional and very skilled. They had obviously done kitchen installations and they were very good at getting it done in a timely manner. I could see that each one had a job for one thing or another and they kept it moving. I can’t say enough about that. I think the price was a fair price. It was not something that we had to hurry through, but once we made the decision, they came shortly thereafter and we had it done. They were very much on time.

Description of Work
Wall To Wall Floor Covering installed linoleum flooring for us. They put in a new linoleum kitchen floor and we also had them use the same floor in the laundry room.

They are a wonderful organization to work with. They are wonderful. They are very professional and they answered all my questions. One guy that I emailed both and forth with questions was very prompt in getting back to me. They knew what they were doing. We had a problem with another company with our countertop and they helped us pick out a new design and new materials that were close to what we had chosen before. They were polite and very nice. They were clean cut. They spoke English so I could understand them. It is a really great organization. They were really very helpful when we went to choose our carpeting and flooring. They didn't just try to sell us the most expensive. They gave us advice all around. It was really a good organization to work with. Their pricing was about $500 less than another place we had gone to. Their pricing is very good. They are coming next week to put in our master bedroom and master bath.

Description of Work
They did our backsplash as well as our flooring. They did our kitchen floor, our powder room and foyer flooring.

They went above and beyond for their customers. We are first time homebuyers and they made us feel very secure with our purchase. They walked us through the step by step process of different carpets to chose from and what the difference was between each. They were punctual and extremely nice. I would definitely recommend them.

Thank you for considering Expert Hardwood. We offer flooring installation and refinishing to the residents of Harrsburg, Carlisle, Mechanicsburg, Hershey and surrounding areas. Our goal is to provide quality workmanship and dependable service to all of our customers. Give us a call today for more information.  …

A and B Home Improvement

Deluxe Multi-Services is a new operating business. We have been in the business for a little over 5 years but recently opened up our own company. As a company, we value quality over quantity. We make sure everything is done to customers satisfaction! We are here to please YOU!  …

How is Wall To Wall Floor Covering overall rated?

Wall To Wall Floor Covering is currently rated 5 overall out of 5.

What days are Wall To Wall Floor Covering open?

What payment options does Wall To Wall Floor Covering provide

No, Wall To Wall Floor Covering does not offer eco-friendly accreditations.

Does Wall To Wall Floor Covering offer a senior discount?

No, Wall To Wall Floor Covering does not offer a senior discount.

Are warranties offered by Wall To Wall Floor Covering?

What services does Wall To Wall Floor Covering offer?