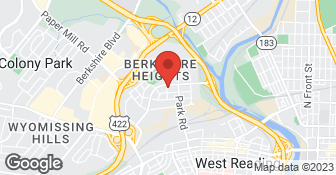 We have the experience and dedication to get the job done right! Specializing in tree services; We guarantee your satisfaction, and we won't leave until the job is done right. We pride ourselves on the quality work we provide, while delivering great customer service!  …

We provide all our customers with a FREE estimate for all there tree services!!  …

Aaron’s has been providing professional quality tree and landscape services to the Bucks and Montgomery County areas for over 10 years! We provide excellent fair pricing for tree pruning, tree removals, stump grinding, landscaping and hardscaping(paver patios and walls). Here at Aaron’s, our customers and their homes are treated as if they were our own. Its not about how many jobs we can squeeze into one 8 hr day like many companies today. To us, Its all about creating customer relations combined with unmatched quality service.. Because thats the American way. Call the A-team today!  …

Communication was fine up till they got the job, then you couldn't get ahold of anyone through email or phone. When workers arrived to do job their boom truck knocked down my dads cable line. The company offered to pay to have the cable line fixed however the cable company said no charge for the repair. So i asked them to take some money off the bill since my dad had to take the rest of the day off and wait on the cable company. Web Wood refuse even though they didn't have to pay to have the line fixed. I will never use them again.

They were fast, efficient and cleaned up after themselves. I will definitely be using them again!

Description of Work
Web Woods cut down a HUGE beech tree that was rotting and in danger of falling. It was next to power lines, but they did an amazing job working around them.

professional work for the best price. they are busy because they are good and could not find a lower price for excellent work.

Description of Work
cut down 5 large trees .Have used Chris before and they are by far the best at tree removal as far as bang for your buck

Web Woods Tree Service has done several jobs for me in the last few years. The first job they did was after the big October snow storm. We had a lot of trees with snapped tops that hadn't completely broken off. I was concerned about tree tops breaking off and injuring someone, so I wanted the tops taken off. These were very tall trees. In the spring after the storm, I had three different companies come out and give us estimates for the work. Web Woods was by far the most reasonable. Chris is a professional who knows what he is doing. He estimated the job cost by the amount of time it would take. That job was about $2400. His crew came in when they were supposed to, did an excellent job, and left the property in great condition. Chris let me know about how they were going to go about doing the work in advance. He kept me informed every step of the way. The job came in right on the estimate in the amount of time it would take and the cost. It was a great experience. I have since had him do other work for me. Each time, he does such great work. He has trimmed hedges and trees for me. He always meets with me to give an estimate of time and cost. He is always right on. He has even charged me less than estimated at times. I trust Chris completely in his ability and work ethic. The last time I hired him, I wasn't there while the work was done, and I felt comfortable knowing that Chris is a professional and would leave the property in good condition. The last time I hired Chris, one of the neighbors told me that the trees looked great after he'd trimmed them. Chris has been fully insured when I've used his services and is happy to show proof of insurance when I asked. Not only is Chris a professional, but he is a super nice guy. I recommended him to my sister, and she also had a great experience. I know he is and quot;branching outand quot; into landscaping now, and I may hire him for some work on that front. I feel quite confident he and his team will do a fantastic job. Hire Web Woods. You'll be glad you did!