M.C.R Pro LLC has been proudly servicing the Philadelphia and Lehigh Valley and surrounding areas since 2016. We are specialized in high quality plumbing services, and make ourselves available 24/7 for those unexpected emergencies. Our staff of fully checked, licenced professionals are ready to help you with any residential or commercial problem, anytime. With our no-fluff pricing, pride in client satisfaction, and expert experience, trust M.C.R Pro for your next plumbing project. Call us today for a estimate and ask us about our first-time new customer and senior citizen discounts!...

They did a decent job in repairing walls and painting touch up areas. But there were several areas that need touch up. I’ve reached out to them multiple times to schedule a follow up appointment to address these remaining aspects of the job. But they have not followed through. Feels like they moved on once they got paid, regardless of whether the job was completed to customer satisfaction. I would not use them again.

They never showed up

These guys did a great job. Prompt service from beginning to end, came out same day - Josh narrowed down the leak, then addressed the leak itself the same day. It took around 4 hours all said and done, and ultimately saved us money (we had no drop ceiling, only other option was to cut into the drywall). He surmised the leak was at the gasket, made a few cuts onto the drywall, and found it! Highly recommend these guys!

M.C.R. PRO LLC, - Rosa and Josh were very professional. Josh made sure I knew what the problem was and how it needed to be corrected. He is one of the most honest, friendly, and Professional contractors I have ever encounter. We would definitely use this company again. Great job!

They were Great, Josh and his assistant (sorry forgot your name) were so accommodating, so personable and very knowledgeable. He would explain to me and my wife pretty much every step of the way what he was doing and what the result should be. he was very meticulous in his work not finishing until the job was above and beyond complete.

I have been working with this guy for a few months. There are up and downs: some work is ok and some is terrible. In summary, sloppy and unreliable is the final words I will give to this guy. The most recent projects are windows, where I finally and completely lost confidence on him and end up never wanting to see him again. I have 2 windows to install: one is to replace with a new window and the other one needs to replace with a bigger window. The replacement is pretty easy: he said $200 the first time I showed him the property, one month later when I got the window and he said $250 a day before the installment. I let it go because it is only $50 as time is more valuable and he took the advantage of that. The other window needs a permit, he said $425 the first time I showed him the property. I chose him because the quote is slightly better than the quote I got from the Mr. Handyman. When I finally got the permit a month later with his name on it, he suddenly changed the price from $425 to $1475. This is the ultimately moment that makes me to end any contact with this guy. He even charged me for picking up the permit because he had to renew his business license with the city. It is what a licensed contractor should do and has nothing to do with me. But he said it is none of my business and he spent time on it. He just exploited the opportunity to renew his business license by charging me. You don't need the contractor at all to pick up the permit!! Too many to say about this guy, sometimes lying, sometimes trying to play games pretending not to know or know something, just trying to get more money from you. Even if he did some OK work with me, but I don't need inconsistent, lying, and unreliable contractors. If you decide to work with him, cross your finger and good luck.

Rosa was my contact and I must say she was personable and professional. Josh and his crew did the work and was willing to work as long as it took to ensure my problem was resolved so that my gas could be restored as soon as possible. I was very satisfied and will use them again in the future.

Went really well, It took a little longer to get the water heater delivered than was anticipated, but when it came in Josh came over in the evening and worked on it until 11:00 pm so we would have hot water. Very nice people all the way around, also very competent. Would definitely would rehire for other jobs. I give them an A+

Description of Work
install of a tankless water heater

And shut off valve installed.

Description of Work
put in gas line for new stove

They did a very good job. They were clean, efficient, and quick.

Description of Work
They did drain unclogging, concrete floor, and drain repair.

It went great. They had a good price and they were nice.

Description of Work
They fixed my pipes and water heater.

Good. We worked out on a schedule. He provided documentation of everything. I would pay him electronically. He would cut the grass and make sure no debris was left.

Description of Work
He did landscaping. 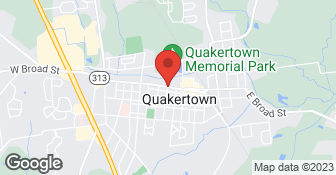