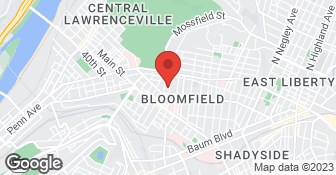 George came out to fix the roof. It kept leaking and he did not respond to multiple calls. When he promised to send someone out to re-check the work, nobody showed up. Would not recommend working with this company - very unreliable.

I was ripped off by him for a deposit to do work, he left ladders and took a check and never gave us a copy of his contract and never showed up to do the work. I learned a valuable lesson about not trusting Keller Contracting. We asked him for a refund even a partial and he refused and threatened legal action if I posted anything negative about him. I contacted the local magistrate and decided that $1,300 I paid him was not worth going to court over, paying fees and getting more upset. The real issue is I have no proof of what he did on my roof. He did no visible work that he claimed he did. My roof still leaks and the box getters are in the exact condition to what the were. We asked for photos and did not get any. I would be very careful about using this guy. He ripped us off and I hope he does not do the same to others. Be careful. I am also curious to see if he comes after me as he threatened to do after ripping me off, not fixing my roof and refusing to refund my deposit.

Response time to request was fast. Great group of guys and very courteous. Good repair work. Took and shared pictures of roof. I was away from the house during most of repair time but got updates frequently. Comfortable with them to come into my home without me being present. Would and have recommended to others.

Sorry, cannot recommend. The leak they claim to have fixed in July 2013 was initially masked by new plaster that followed their repair. However it became apparent the water issue was not cured when the new plaster soiled, peeled and now caved in due to water damage. We called Keller's when we noticed water spots coming through the new 8 layer plaster in December - no response. January we continued to call then filed complaint with the BBB. Since then, Keller came out once & promised to put on a chimney cap. Haven't seen him since.

Description of Work
They were hired to fix a leak that was causing water and plaster damage. This is the only item they were hired to cure. They were on-site for about 20-30 minutes to address what they said was a flaw in brick pointing.

Perhaps the reason he has so few reviews is because he makes appointments, then never shows up, and rarely calls. He seems to have no respect for common courtesy and for customers' time, little regard for keeping his word to you, and is somewhat scattered in his record-keeping. He is also confused by the idea that just because he calls ahead to inform a customer that he'll be late for an appointment, the customer will still be mad that he doesn't call again when he misses the rescheduled appointment time. When I first found this company in early April after doing a search for roofers, I put him on the bottom of my list to call because his AL page only showed one report. But after eliminating other roofers with numerous reviews because they did not work on flat roofs, I called George Keller on Wednesday, May 16, 2012 at 4:18 PM. Twelve minutes after calling and leaving my voice messege on the answering machine, George called me back, and confirmed that, yes, he gives free estimates and could bring the two documents I requested when he came. We then made the home visit appointment for two days later on Friday, May 18, at 4:00 PM. The day of the home visit, Friday, May 18th, George called me at 12:19 PM saying he'd be late for our 4 PM appointment. He said he was on a site about 45 minutes from my home, and that he'd call me when he was ready to leave it and head over to my house, but he couldn't tell me when that might be. He said, maybe 7 PM, at the latest. Since it gets dark around 8:30 PM this time of year, and there's no way a roofer can see properly after dusk to give me a proper estimate, I asked if he would be able to get on my roof before 8:30 PM. He assured me he would definitely be done before then! I thanked him for calling ahead to inform me of the change in schedule and asked that he call me at 6 PM, regardless of where he was, to update me on his schedule and when he thought he'd arrive at my location. I did not want to be "held captive" in my home wondering when he might call, and staying off the phone in case he was trying to call. This way, I knew I could be in-and-out of the house and make phone calls until 6 PM. At 6 PM, I was home waiting by the phone for his call and listening for the doorbell for his arrival. I waited for more than TWO HOURS!! By 8:13 PM, I had to get to the pharmacy before it closed, and figured it was safe to leave home since he'd only have a few minutes of light to see by even if he arrived immediately. I was furious that he had wasted my day!When I returned from the pharmacy, I found no voice messages on my answering machine to indicate that he had tried to contact me while I was gone. On Sunday, May 20, at 8:03 AM, he called my number and asked for another person's name. When I said this person didn't live here and the caller had the wrong number, I recognized George's voice and identified myself. I told him that I spent over two hours on Friday evening waiting for him to call or show up for our appointment, and he said he didn't actually finish working until 9:30 PM and thought it was too late to call me by then. When I reminded him that he had claimed in our earlier phone conversation that he said he'd definitely be done by 8:30 PM, and asked why he couldn't have called me earlier when it looked like the job he was on would take much longer than he'd originally thought, George said that he had called me. "No," I pointed out, "you called me around noon to tell me you wouldn't make our scheduled 4 PM appointment time. Then we rescheduled for the evening, and you didn't call me to let me know you wouldn't be coming by at all." He continued to miss the point that potential customers are going to be mad when contractors fail to show up for appointments and don't keep them updated. He then told me it was "my choice" whether I wanted to reschedule. I questioned whether he'd even show up if we made a third appointment, and he didn't give any answer to restore my confidence in him. So I said I couldn't trust him and wouldn't reschedule, and hung up the phone. I was willing to give this contractor a chance at my business, not wanting to exclude him from consideration only because he had one report. But, he effectively excluded himself from consideration by his lack of courtesy and professionalism. I gave him a "D" grade for "Responsiveness" instead of an "F" only because (1) he returned my initial call so quickly, and (2) his noon phone call before the original 4 PM appointment, but it is a very low "D".

Description of Work
Wanted him to come and look at my flat (roll) roof, and give estimates for resurfacing and new gutters. Had he bothered to show up to the appointment, I'd planned to also ask about his services for plumbing repairs and interior restoration services, but he didn't bother, so he lost my business for all his services.

I called George based on positive reviews I had seen on Google for his work. He promptly returned my call and was extremely flexible in scheduling a date and time to come take a look at my problem. We had to cancel due to poor weather on the scheduled day, but George again was extremely accommodating in rescheduling. He arrived promptly at the scheduled time and provided a thorough inspection of my roof. Not only did he inspect the roof, he got on it! While this may seem like standard procedure, mind you that I had 2 other contractors tell me it was too steep to inspect and the inspected it with binoculars. From this vantage point, George was able to point out numerous issues and proceeded to give a detailed explanation of proposed remedies as well as approximate costs. He also gave multiple options depending on quality/budget needs. George seemed to be incredibly knowledgeable in his trade and with his recommendations. I can tell by his attention to detail that the end result will be top notch. I would not hesitate to recommend Keller Contracting for any roofing related services. He does provide other general contracting services as well.

Chernega Construction is a trusted family owned business based out of Lower Burrell, PA that services the surrounding Pittsburgh area. We specialize in home remodeling, new home construction, concrete work, and roof installation. If you can dream it. We can build it. For over 3 decades, we have specialized in residential construction, and commercial general contracting.  …

We do interior and exterior painting plastering and drywall and other miscellaneous jobs we've been doing this a long time with many references in the East end of Pittsburgh. We guarantee your satisfaction and we won’t leave until the job is done right. We pride ourselves on the quality work we provide, while delivering great customer service! Check out our services offered and call or click to schedule a free estimate today.  …

Chameleon Painters LLC will provide top-quality interior and exterior residential and commercial painting services. The principal officers of Chameleon Painters LLC believe that most companies in this industry suffer two major problems. These are poor scheduling of job projects and poor retention of quality employees. Both lead to lower customer satisfaction, lack of repeat business and a low word-of-mouth referral rate.  …

Insured
All statements concerning insurance, licenses, and bonds are informational only, and are self-reported. Since insurance, licenses and bonds can expire and can be cancelled, homeowners should always check such information for themselves.To find more licensing information for your state, visit our Find Licensing Requirements page.
General Information
Free Estimates
No
Eco-Friendly Accreditations
No
Payment Options
Check, Visa, MasterCard, American Express
Emergency Service
Yes
Warranties
Yes

How is Keller's Contracting overall rated?

Keller's Contracting is currently rated 2.1 overall out of 5.

What days are Keller's Contracting open?

No, Keller's Contracting does not offer free project estimates.

No, Keller's Contracting does not offer eco-friendly accreditations.

Are warranties offered by Keller's Contracting?

What services does Keller's Contracting offer?