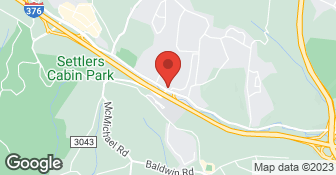 This is a service-only location that services our existing customer needs in Pittsburgh. There is no showroom or sales office at this location....

Sunroom was prefabbed and then rebuilt on site. The workers were very professional, answered all my questions and the overall product exceeded our expectations.

They rescheduled 3 times, on the day of the service. Finally sent one guy, to install 4 windows, 3 or which were very large. He was in our house until 10 pm that night, noise and all. Idk how they are in business.

First the contract was signed on June 2nd and did not hear from Champion until late August. A start date was given and then was reset. Materials were delivered and set on my lawn and sat there for three weeks before any work began. The roofer came and replaced my small porch roof but left large gaps on both front corners where the drip edges met. I ask and was told by the roofer that there was nothing he could do to fix the problem. Then the siding workers began working and after a couple of days were leaving a bit early (3:00 pm) because they said they were not getting home until after 6 pm when they left at 4:30 pm. When the job was completed the siding workers asked me to sign the completed form which I refused due to the roof problem and unfinished caulking around several places. The company called and asked again for a completed form signature but I told them no because the problems I pointed out were not fixed. A week later two workers showed up and fixed the problems and I signed the completed form. A week later I received a letter from Champion asking me to sign a completed form that they were missing. I called the office and was told the form was not needed. Then the bill came and requested immediate payment upon which I called the office and explained I was a little upset that they demanded immediate payment when I had waited over four months to have the work completed and a large section of my front lawn was destroyed from the material setting there during August and September before any work started. They had no response. I will have to repair the lawn on my own.

The service was good, good. It worked out fine. They did a nice job.

Description of Work
They did my sun-porch windows.

The installation went great. The installers were very professional. I have 2 Windows that were messed up. The bathroom window has a scratch in it replaced once and still has a scratch. Living room window replaced twice and still isn't correct it now has white spots throughout it. It's been a year and I have yet to have a completed product. Champion is horrible with customer service and they never return phhone calls. I have reeported them twice to BBB and about to do it for a third time because that is the only way to get them to respond.

Description of Work
I had 7 Windows replaced and a sliding glass door.

They installed a trench around the inside wall of garage. The trench now has many cracks and the top of the trench has a taper. This taper on the floor prevents me from using shelving against the wall without having to add front shims. I had a man door to the basement that was cemented shut. Champion came out and dug up the concrete (creating a dust mess once again that I had to clean up) and re-pour the concrete. They installed a floor drain that is pretty much useless because the water flows away from the drain and into my basement.

Description of Work
Had a water leak in the corner of concrete floor garage.

Description of Work
Added a roof to my back porch.

I had my roof replaced 2 1/2 years ago by Champion. They sold it to me with a lifetime guarantee so I was willing to pay more compared to other companies. This past Saturday morning, I had a leak that caused damaged to my ceiling. I attempted to call the warranty hot line however after several rings the line went dead. I attempted another number for Champion with the same results. I then tried the " call for a free estimate" line and finally got ahold of someone. The telephone rep appeared to be nervous and didn't know what to do but took my info and said someone would return my call. As of Monday, I still hadn't received a call back and placed another call around lunchtime. I was advised that the Manager who handles the warranty issues was off and would call when he returns. It's now Tuesday night, 3 days after reporting the roof leak and I have no idea when Champion will or if they will ever call me back. For promising a lifetime warranty, they are not quick on assisting a customer. I will never use them again for anything nor could I recommend them to anyone. It is obvious that customers are not that important to them.

The work and windows, I have no complaints. It's the customer service and sales rep. When I purchased the windows I had to sign a lead epa abatement at a cost what was suppose to be and told was $39 a window. I asked the sales rep and read the contract and was told if only 1 windows tested positive, then the charge would be $39 only. I received a bill 20 days after the installation for $117. They said if one window tested positive then all windows are, even though the other rooms where previously remodeled. When I called and complained 3 times, I was told they had to call me back, which never happened! No follow up letters, bills or calls. Dave, called me 5 months later and told me I was going to collections. When I explain everything to him, he basically reiterated again the policy, but nowhere in writing does it say if one is positive, then all are positive and will be charged. I never do business with these people again. And watch your wallet, if your doing a ton of windows.

Description of Work
Had 3 windows replaced in old 1903 house. Kitchen, bathroom and attic. Plus had 2 windows shrunk in height.

Chernega Construction is a trusted family owned business based out of Lower Burrell, PA that services the surrounding Pittsburgh area. We specialize in home remodeling, new home construction, concrete work, and roof installation. If you can dream it. We can build it. For over 3 decades, we have specialized in residential construction, and commercial general contracting.  …

How is Champion Windows and Home Exteriors of Pittsburgh overall rated?

Champion Windows and Home Exteriors of Pittsburgh is currently rated 4 overall out of 5.

Are warranties offered by Champion Windows and Home Exteriors of Pittsburgh?

What services does Champion Windows and Home Exteriors of Pittsburgh offer?