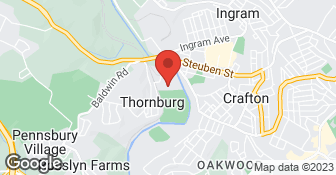 American Restoration is an exterior cleaning and restoration contractor. We specialize in cleaning all types of masonry and other exterior surfaces. We also do all types of masonry repair, brick pointing, sandblasting. Since 1970 ARS has restored over 5000 properties in the Pittsburgh and surrounding area. ARS also specializes in all types of epoxy and other specialty epoxy coatings over concrete for both residential and commercial customers. ARS offers free demonstrations and evaluations....

Those ugly black streaks (and/or moss) make your roof look terrible and can even shorten its life span. Our biodegradable soaps and gentle application process will kill and remove all of the those black marks in one day... guaranteed. Every roof treatment includes a Written Ten Point Roof Inspection Report AND a limited Written Guarantee against future staining. Estimates are provided via phone or email using satellite imagery. We have over 2000 satisfied customers in North and West Allegheny County, Butler County and Beaver Counties. Call or visit our website for more info, or your free estimate! Your estimate is free, the service is friendly, and the results are 100% guaranteed! Your roof will look terrific again... for years to come! Call now: (724) 538-0173.  …

Both jobs are poor quality. The garage floor had a hole within two weeks. He repaired it and now there are white streaks all over. The driveway looks worse now than when he started. The patches are not staying. We regret the day we hired him. He will reply to this review blaming us for the shoddy work. I only wish I would have read all the reviews first. Be smart and look elsewhere. He also charges a high fee for credit card payments. Doesn’t include the sales tax in his estimate and he charged our credit card with out our authorization!!!

Good. Asked them back for additional work. Very responsive.

Excellent. Started work immediately and cleaned up each day. Kept us appraised on progress and expectations of work to be competed. They matched my requested mortar color which was excellent!

Russ's team showed up as agreed. They worked together as a team. They completed the work timely, cleaned up. No complaints. They did a great job.

Description of Work
Had 10 lentils replaced and pointed bricks as needed. Fixed cap on chimney. Cleaned moss off roof shingles.

Russell and the crew came in and took down old concrete to find the sandstone underneath was badly damaged especially in the corner where the water was flowing to. He rebuilt the corner of the house and smoothed out the other sandstone. He refinished it and painted with a coating fine stucco finish. Everything looks great. Thank you

Description of Work
We had to have our foundation repaired. The concrete was cracking and expanded on the side of our home. .

We were scheduling a new roof for our 1900's building that has been converted into office space & the roofers informed us that our chimneys would need to be repaired before they could begin. We contacted American Restoration Services and they were able to complete the repairs well in advance of our Roofing job. Work was completed quickly, cleanly and without disruption to our business operation.

I have a home that is almost 100 years old. The foundational block had started to crumble and some of the block was worn away from water. Russ and his team replaced a number of blocks and then painted over block with a colored adhesive paint that looks great. Also the guys pointed the brick in my porch and window seals where the mortar had come loose. Russ did his best to find block that matched mine and was able to complete most work while I was at work. I would recommend his team for any type of restoration.

Description of Work
Replaced block in my foundation that was deteriorating - added a foundational adhesive paint that stopped the crumbling of the block. Pointed the bricks.

I hired the company to point the bricks on my house, and to fix bulging bricks on the back where water was leaking in.? In doing so they had to take down every thing on the walls of the building, including the downspouts.? The work started 7/18/2014 and ended 8/12/2014 at which time they attempted for the 3rd time to replace the downspouts in the back of the building.? They had attempted to fix the downspouts the Friday before, 8/08/2014, without success, and returned on Monday, 7/11/2014, but a storm that night blew it down into the back yard.? So, they returned the next day, 7/12/2014, and supposedly replaced them securely.? Trusting that it was done correctly, I paid the company the remaining $6MM owed.? On Monday, 7/18/2014, another rain storm caused the downspouts to leak like a seive all along the pipes.? Although I called and left messages as to what happened, the company spokesperson has not returned my calls to this day.? I called my roofer and after inspecting the downspouts informed me that they used roofing nails to replace the downspouts, thus causing the water to seap through the holes. American Restoration was to clean up after completing the job, however my ac unit wasn't covered with tarp, and it has the pointing mixture inside and it's causing order throughout the house.? They left morter all around my plants and ruined them but they did pay $40 to replace them.? But, the mortar is throughout the garden and should have been cleaned up.? There was a broken brick that should have been replaced and now I was told? by the roofer that it will cause water damage in my wall in that area in the future. He informed me that they at least could have capped the brick to prevent the entrance of water.? There will be leaking and other problems from it.? Additionally, I have pictures of my cellar door and steps that were not cleaned-up --- I was away the last week of their job, and I trusted that they had cleaned up properly as they promised they would; so the last payment was mailed to them when he asked me via telephone for it. ? I am so disappointed that I couldn't trust them to leave everything as it was before they began the job. What kind of people do such things to an elderly woman?? I have pictures of all of these complaints should they be needed to verify what I am contending.? There is a contract that says they have the right to repair what needs to be done but since I sent my last check in they haven't responded to any of my calls.? And apparently they don't know how to put up downspouts, and I wouldn't want them to try again after failing to do so 3 times. I filed a suit against the company for reimbursement and the court settled in my favor. The company did appeal the ruling and we went through arbitration and again I was sided with for the ruling.

Description of Work
They were to point the bricks of my house.

[member name removed] has claimed that our company improperly reattached her downspouts, damaged them, and wants all brand new downspouts. The trust is that her downspouts are over 30 years old, are bent, have numerous holes in them, and are comprised of different makes that did not fit properly together. The downspouts were barely hanging on the building when we arrived and improperly configured. She has one that goes horizontally across the side of the building. ( Weird set up to say the least. ) ARS reattached them exactly as they were and even added a support when an elbow blew off in a storm days later that was not a result of anything we did. Cleanup [member name removed] claimed that ARS employees pulled out plants planted by her dead husband. The trust is that ARS employees removed no plants and to be honest most of the growth on the side of the home consisted mainly of weeds which we covered regardless. ARS cleaned up perfectly and removed all debris as we do on every job. Air Conditioner [member name removed] claimed we did not cover her Air Conditioner and that the mortar caused odor throughout her house. Nothing could be further from the truth and her air conditioner was properly protected with tarps. ( By the way mortar has no odor. ) Cellar Door [member name removed] claimed we stained her cellar door The truth is the only thing that was worn with her door is that it was in need of painting. This customer went out of town when she knew the payment was to be made upon completion of the job. She would not pay the final bill until we gave her another 5% discount, and paid her $40.00 for her missing plants, painted her cellar door, and reattached her downspout that was blown off in a storm. The truth is this customer is not quite normal, more than a little crazy and tried constantly to get our guys to do work that was not included in our agreement.
1.0

Paid $10,000 down with balance due as work was completed. Contract has not been completed and I am being sued by American Restoration for $19,000 at the Allegheny County Court docket # AR-14-2163. I am counter suing for $18,150 plus treble damages because American Restoration was in violation of the PA unfair trade practices and consumer protection laws.

ARS entered into a contract with this customer for a new roof, sandblasting and painting of an exterior fire escape, and complete cleaning and pointing of all the brick on this home. ARS was good enough to get 3 roofing prices for this customer and include the roofing price in the contract.( No mark up) Customer paid a deposit for the roofing portion of the job that went straight to the roofing co. When the roof work was completed the customer refused to pay the remaining balance owed to the roofing company. ARS was stuck for over $6000.00. ARS was also supposed to receive a 30% deposit on the remaining work. After erecting scaffolding and purchasing all materials the customer refused to honor agreement and would give no reason for non payment or breach of agreement. ARS had no choice but to sue the customer to recover monies paid to the roofing company, job materials and labor costs to our employees. ARS has been in business for 44 years and restored over 5000 home and buildings. ARS has only been to court on a few occasions and only to recover monies when customers like this have refused to honer their agreement. The customers counter claim is a joke and without merit. ARS has done no work on the home other than building scaffolding and pointing above the porch roof so the new roof would not be stained. Customer never lodged any complained with us regarding and issue they might of had with the roofing co. The lawsuit they are referring to is just a ploy to try to avoid payment. We will sue these 2 individuals for slandering our good reputation once the facts of this case are determined in a court of law.