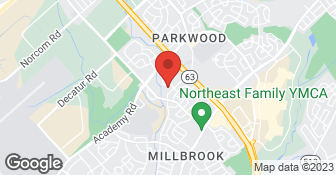 Smith Construction and Remodeling is a full dervice remodeling and construction company. We offer one-stop shopping to our customers, using our 18+ years of experience and connections in the industry to provide a hassle-free and quality product...

For the majority of the project things moved smoothly, however there were some bumps along the road and a few communication issues during the project. We were told that we would be able to move back in to our home in January 2014. The contractor requested an additional week to finish up some things, to which we complied. Despite our concerns with everything being finished on time, we were assured everything would be finished the following week. At 6am on the morning we were to move back in (movers coming, new furniture being delivered, etc), we received a call from the contractor informing us that things were not finished (and he?d still be doing work on our house for the next few months). All of our belongings were delivered to our house, as we couldn?t reschedule the deliveries with that short of notice. Additionally, per our contract, we had a one year warranty on the work that was done by the contractor. Throughout the whole renovation, he assured us that he would take care of the issues that arose (nail pops, wall cracks, paint issues, etc) or problems that we had with some of the work that had been done (we had a very big problem with the tile that he installed incorrectly in our basement). We provided him with a punchlist of items which we wanted him to address. In January 2015, he came out to our home and took care of a few items, however there were many more items left on the punchlist which he said he would take care of. After months of back and forth with him, he finally came back out to our house in November 2015 to go through the house top and bottom with us and review the outstanding items. He promised us that someone would be at our house the following Monday to take care of the work. No one showed and we didn?t hear anything from him until 3 weeks later when he decided that some of the items on our list were not under our warranty. Now, two years after we moved back, there are still outstanding items which we were told would be taken care of under our warranty but have not. We have made repeated attempts to resolve the issues with the contractor and he has failed to show up to our home when we had times scheduled, or return our calls/emails/texts. Once he received the majority of the payments for the work on our home, he moved on to the next project and has not given us a second thought. We are thoroughly disgusted and disappointed with how this has turned out and are seeking legal recourse. I would never use this contractor again, and would advise people to find a different contractor to do the work on your home, unless you want someone who will leave you high and dry with a worthless warranty.

Description of Work
We used this contractor for a total gut and renovation of our home which started in Oct 2013 through April 2014 (we were told this would be an 8 week project).

We are a CNC Woodworking shop who specializes in larger scale art/design projects, architectural installations/interiors, even DIY projects like custom furniture and custom signage. We guarantee your satisfaction, and we won't leave until the job is done right. We pride ourselves on the quality of work we provide, while delivering great customer service! Call or click for your estimate today!  …

Full service home renovations and remodeling. No job too big or too small. Quality and service are our #1 priority!

Smith Construction & Remodeling is currently rated 2 overall out of 5.

No, Smith Construction & Remodeling does not offer a senior discount.

No, Smith Construction & Remodeling does not offer warranties.

Smith Construction & Remodeling offers the following services: Full service home renovations and remodeling. No job too big or too small. Quality and service are our #1 priority!