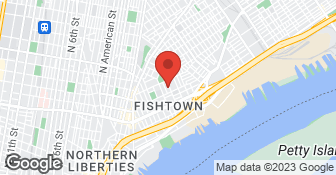 They were very professional, knowledgeable, quick and efficient

Phenomenal! I could not be happier with George or the work he did. Ive been posting reviews everywhere and saw he didn't have any on Angie's List so I'm leaving this review because he so deserves it. This is the review I left on Yelp, which says it all: Can't say enough good things. George is a true gentleman. I'm in New York and the job was in Philly, so there was a lot of calls back and forth on this job and know I must have driven him nuts! But he always responded, even to texts. He gave a fair estimate, did the job as described - and even went above and beyond when he saw a few other issues. Because I was remote, he sent updates with photos every day. Not only was the job done to perfection, but being able to put your trust into a GC while you're in a different state and be taken care of with absolute courtesy and respect, when you may in fact be making him crazy, is priceless. Like I said, can't say enough great things. Completely and totally happy from start to finish. Would hire him again for just about any repair or remodel in the future.

Any type of Masonry. Cost is determined by the job. No travel charges. No service fees. May contact by email. No extra charge for 24 hour emergency service.  …

As a family masonry company, with multiple trucks on the road, a talented team of masons and over 6,000 projects completed, Natalini and Son have established themselves as one of the most trusted masonry and brick companies in the Philadelphia, PA area. Owner operated with 38 years of knowledge and know how to get the job done right. We are a team of 5 employees and use no subs. We are not a cookie cutter company so cost is determined by the job. We do not have travel charges. Please contact directly through email.  …

How is LOGAN CONSTRUCTION overall rated?

LOGAN CONSTRUCTION is currently rated 5 overall out of 5.

What days are LOGAN CONSTRUCTION open?

No, LOGAN CONSTRUCTION does not offer a senior discount.

Are warranties offered by LOGAN CONSTRUCTION?

No, LOGAN CONSTRUCTION does not offer warranties.

What services does LOGAN CONSTRUCTION offer?