GirlContracting was thorough, easy to work with, patient, conscientious, adaptable, went the extra mile, has high standards and an exacting finish. GC is a great General Contractor, and lead a great team. We are very happy with the look and finish of the job.

Description of Work
Gut & remodel a very old Kitchen for a Quaker Meeting.

It went very smoothly, we were very pleased from start to finish, they were very neat and professional. Girl Contracting manager with the employee that they had, they were all top notch. At the end of the day, it was very clean and tidy job.

Description of Work
They renovated 3 bedrooms 2 1/2 bath, we redesigned the whole thing, we rip off old spaces and created a new one.

Let me say that I had high hopes when we started the job. Lynette is very charming and clearly very intelligent. Her estimate was not the lowest but because of her obvious smarts and personality, I chose her company. A number of things went wrong, but one can always expect problems with any project. My first issue was when she installed a bathroom exhaust fan venting out to the front of my house (historic 1930 tudor) with a square white piece of plastic right in the center middle of my house. She told me that the exhaust fan could not be vented anywhere else. I was very upset but wanted an exhaust fan. I hired the electrician we always use for household work who came to my house today (and previously told me there would not issue venting the exhaust at the soffit). I was not going to write a review until he told me the exhaust fan was not even hooked up to the outside of the house. Also, during the project Lynette decided she needed to charge me for "delivery" of the tile (that she volunteered to pick up personally) and the faucet, etc for the bathroom. This was not on the estimate. Before paying her, I called the two places where the tile was obtained and the fixtures. She had overcharged me for both "deliveries". However, she had previously threatened to not finish the job and I was worried she wouldn't so I said nothing. The marble tile floor was also an issue. I warned her that tile floor was very subject to scratching and to please make sure it didn't get scratched during the install. Regardless, the installers scratched it. Then when the tile supervisor came to my house he said that he didn't see the scratches. They were very visible to my husband and myself. He offered to put a treatment on the tile to remove the scratches. I accepted. However, after the work was done, I noted that whatever he applied to the floor changed the color of the grout. So, now I have multi colored grout on my floor. We also had all the doors in the hallway stripped as well as the hardware. I rented a truck and took them myself. When the day came to install the doors I found one of her workers painting the newly stripped hardware. I said something and he stopped. Had I not been there, I'm sure that all of the historic door knobs and hinges would have been painted. Further, her carpenter emptied his tarp full of drywall into my newly landscaped garden that I paid a considerable sum to get landscaped. When I took issue with this, instead of apologizing profusely (which is what I would do) she called me a racist. In short, Lynette is great as long as you don't question her. In fairness, she did offer to remove the "smoke alarm" looking vent from the front of my house but I did not trust that it would be done properly. Fortunately, we have a very trustworthy electrician and handyman that was able to repair my house. Updated 6/07/2020 I take issue with your response that you did not hear from me. Do I need to tell you to connect a bathroom exhaust properly to the outside? Do I need to tell you that you over charged me for so called "delivery fees" that were not in the estimate and were in excess of what the vendor charges. Do I need to tell you that you shouldn't put a piece of plastic on the front of my house and instead install the exhaust system to the soffit? My family electrician did with ease. You told me I had to vent it to the front of my house. Do I need to tell you that your employees shouldn't dump their construction debris in my landscaped garden? Frankly, I would expect you should have better judgment. When I did complain to you, you threatened to not complete the job. Let's be real I was going to walk away from this experience and say nothing, but why should I?

Description of Work
A redo of a second floor family bathroom

We regret that we did not live up to your expectations. We are usually known for exceptional customer service and work. We apologize this was not your experience about 1 year ago, when this project was completed. We are saddened that we never heard from you directly, until now. We certainly would have welcomed the opportunity to make things right.
5.0

Communication and project planning was excellent. Workers are very competent, have an eye for detail, and don't cut corners. Flexible with changing scope mid project when things come up, with changes appropriately communicated and charged. I'm very happy with the final result.

It was excellent. They were very clean, neat, and very punctual. It was worth the cost.

Description of Work
They remodeled my entire condo.

Spectacular! Off the chain the best! I will be using them again. They took ownership of the project. Perfection and professionalism throughout.

Did not have work done by girlcontracting but we did bid them but pursued a contractor through our designer. Have never met a more professional individual in the contracting business. Lynette was sincere, kind, informative and polite. I even called her directly to ask her about a problem we ran into and she proposed a few solutions. Will definitely consider for future projects.

Description of Work
Pricing and Bid

Girl Contracting hit the ground running when it came to our kitchen remodel and prioritized our need to have our kitchen remodel started and completed before the end of summer. Lynette, the GC made sure to accommodate me and my husband's work schedules so she could guide us through countertops, tile, backsplashes and everything in between. She also anticipated issues in advance so that we never had to make a decision on the spot and responded promptly to any concerns we had. Her workers were the brightest spots in the whole process. Each day they arrived promptly making sure to carefully clean up at the end of each work day and keep work areas covered and organized as so we could still function comfortably in our household despite the construction. In addition we asked that they update our deck beforehand and that was completed within a week. We will definitely use Girl Contracting in the future due to the attention to detail, flexibility, affordability and individualized attention we received that made what might normally be a stressful change a pleasure to experience.

What a breeze! Lynette and her team did a great job. My husband and I knew we wanted to open up the wall between our dining and kitchen. We did not foresee the challenges involved regarding electric, lighting, and pipes in the wall. Lynette is a problem solver and works quickly and professionally. We even made some last minute changes and this was no problem for Girl Contracting. The turn around for our project was less than 2 weeks which was so great. Lynette is easy to get a hold if and makes time for your concerns. Everyone on the team is very friendly and professional. We are very pleased with the outcome!

The job went very well and she was on the job site everyday to make sure the job was going smooth, wanted to make sure we are happy with the work.

Excellent. She and her team were professional, punctual, honest, and dedicated to the task. I truly enjoyed interacting with her throughout the whole process from beginning to end. We are so pleased with the results. We love our newly renovated condo. We would use them again and again.

The job went well I was able to upgrade my counter tops to some beautiful granite counter tops. The cabinets looked much better when they were done and were much more functional than the small cabinets that were original with the home. The work took a little longer than originally anticipated but they communicated well with me and the finished job was worth the wait. I sold the home two years later and due to the work done the house was able to sell for much higher than when I purchased it.

Description of Work
I needed some work done in my small kitchen in my 1 bath, 2 bedroom home. I needed new counter tops and new cabinets for my kitchen.

They were timely, and the floor is beautiful. They did really good work and came on Mother's Day, which was an unexpected accommodation! She made it very convenient for my schedule.

Description of Work
They installed hardwood flooring in one bedroom.

I appreciated that it was done well and they didn’t break the bank. They were professional. They called me if questions came up. It was a great experience.

Description of Work
They helped us renovate a rental property. They did some kitchen and remodeling work too. 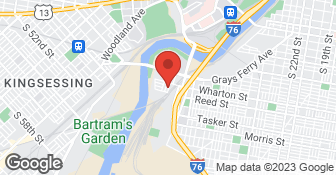 Girl Contracting, Inc. is currently rated 4.9 overall out of 5.

No, Girl Contracting, Inc. does not offer eco-friendly accreditations.