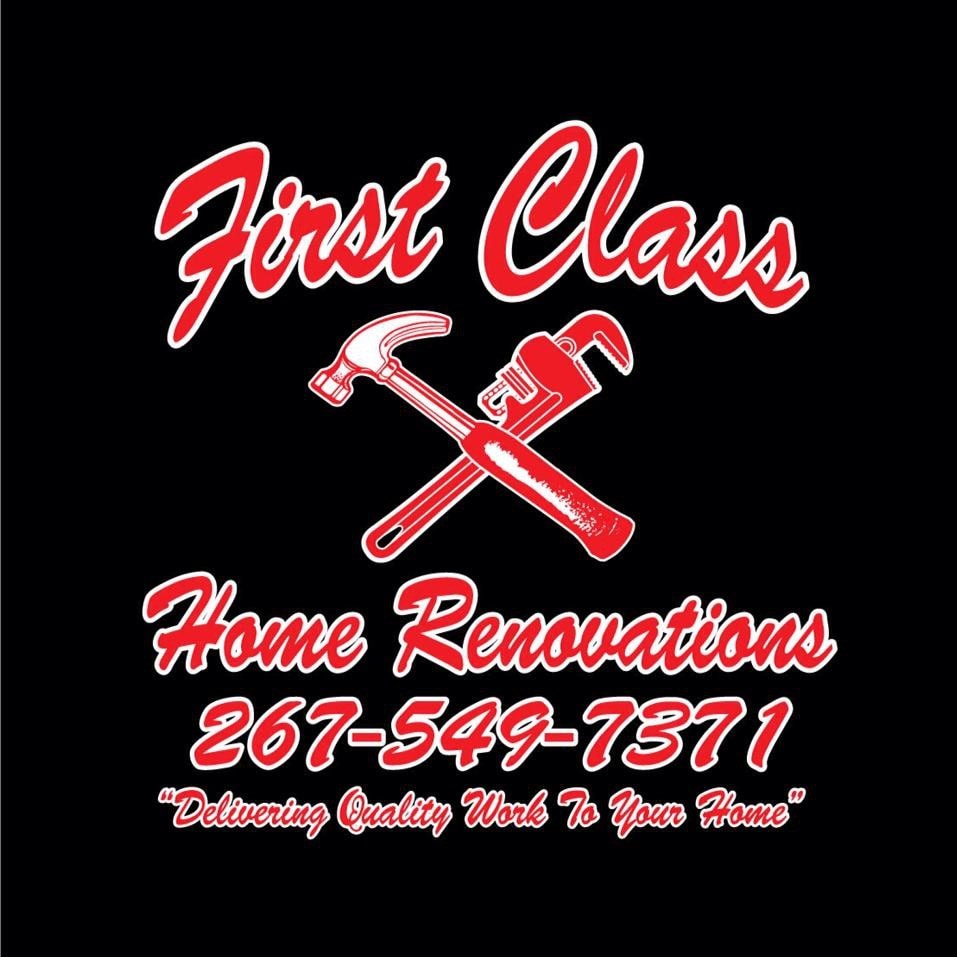 Here at First Class we have guys that have 20 plus years of experience in every aspect of your Home needs. Don't delay and call today for an in home estimate. First Class Home Renovations is a Pet Friendly Company... 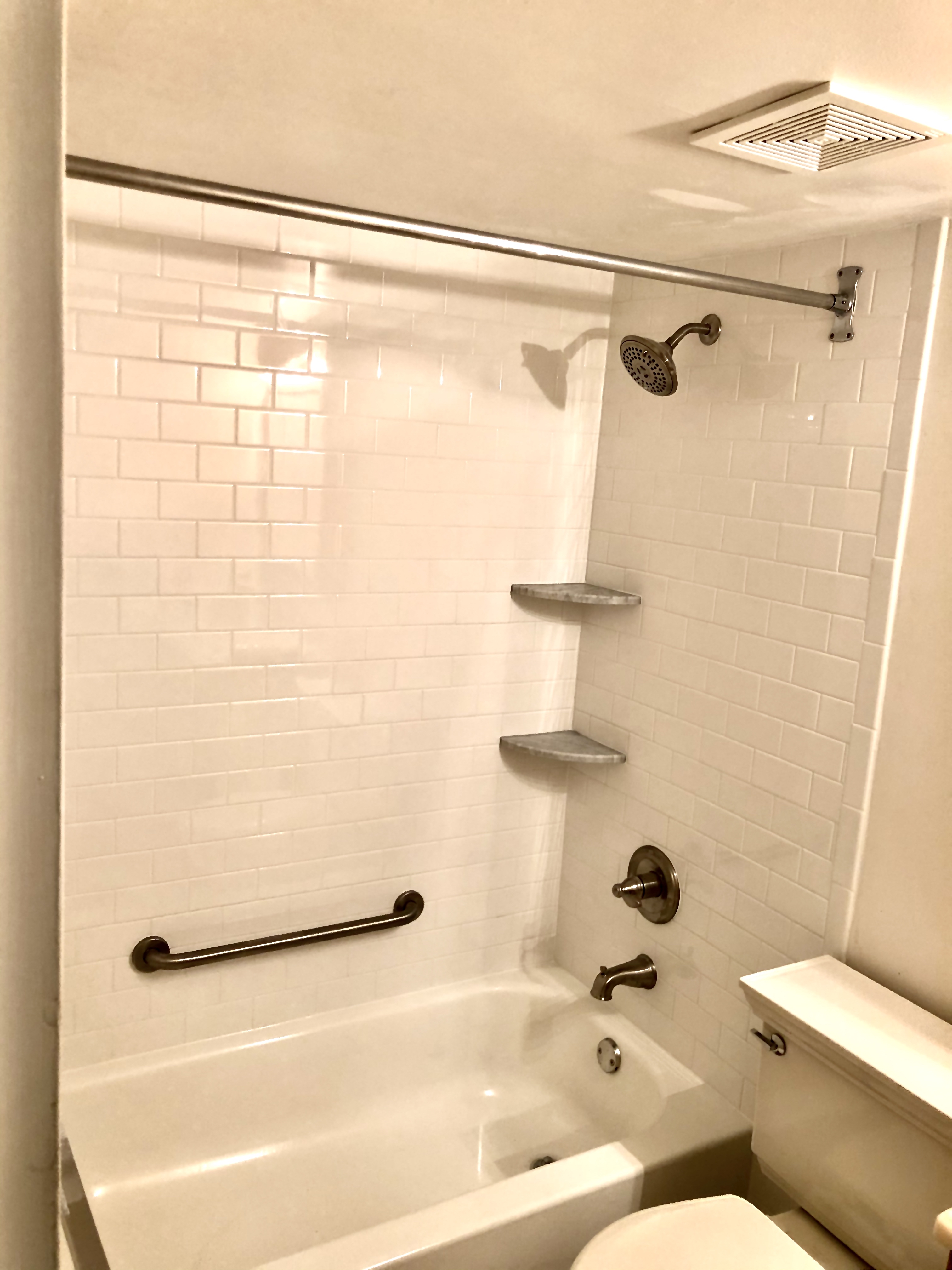 Frank and his team did a great job. I was out of town and needed a series of jobs completed before a move-in date, and even with the supply chain issues everyone is dealing with these days, Frank got it done. I’m really happy with how everything came together. I trusted him throughout the process, and I would recommend him to family.

Frank and his team have completed a few jobs at our home. His prices are reasonable, he tries to find the simplest low cost solution and the work is done right. Once there was a slight problem with a repair and they came right back out to make it right no questions asked. Highly recommend.

Poor communication initially but handyman finally arrived and he did a great job! He was polite, friendly, respectful and very knowledgeable about the job before him. In fact we will ask his company to do additional jobs for us. Very pleased!

Frank and his team were great. They were able to fit in our small bathroom project between other jobs and get it done quickly. The bathroom looks fantastic, a huge improvement from what we had before and exactly what we pictured. Would definitely work with them again.

Frank and his team did work in my basement and everything turned out great! I would highly recommend First Class Home Renovations.

I am thrilled with my new tub and the surrounding subway tile. Frank and his team are skilled professionals who pay attention to details. They gave me a bathroom that was even better than I imagined! I highly recommend First Class Home Renovations, you won’t be disappointed!

I hired First Class three times for different things my 94-year-old house needed. They had initially remodeled my master bath and did such a glorious job that I hired them again when I needed to transform my sunroom and a powder room on my first floor for a functional and beautiful living space for my elderly mother, who came to live with me unexpectedly. They took such care to complete the job brilliantly. The sunroom became a beautiful space and the powder room transformation was extraordinary. They do all the things you want in a trusted partner: They do extraordinary work, at a very fair price and the quality of their team is outstanding. They care about their work and their customers. It's why they remain my go-to team for everything home related. It also helped me secure top price on my home sale when I put it on the market. They are the team I recommend to all my closest friends.

I can't say too many good things about First Class Home Renovations. They've done three interior remodeling projects for us, painted the exterior of our house, and thos past summer, installed awnings over our porch, a job which turned out more complex than we thought, but which they handled with aplomb. They're well organized and pleasant to work with. I highly recommend them.

FCHR did very good work and were very thorough and honest. Felt comfortable having their workmen in our home...very repectful. They had high standards of cleanliness and overall good attention to detail. We did feel like there could be even more communication on timeline and design decisions, and some details, and would love to see more of this. We asked for some very custom aspects in our renovation, and appreciated their willingness to meet our desires even when they were not standard requests, therefore requiring some significant adjustment.

Description of Work
Painting and repair of Victorian home

Although the Contract Specifications were received the day before the installation, work was completed expertly, by the craftmen. The two party teammates, worked diligently and completed the floor install, wall backsplash and moulding. they were prefessional and brought all the necessary equipment, as well as cleaned after completion. I was also impressed with the detail put forth and friendliness. They deserve High Marks Plus.

Could not have been happier with the promptness to set up an appointment. The appointment time was reasonable and the repairman was on time & introduced himself. He looked at the job & proceeded to make necessary repairs. I would surly hire again..

Description of Work
cabinet had to be removed from wall, repaired, and reinstalled.

First Class Home Renovations(Frank) came to our rescue when our initial contractor bailed on us. We could not be more grateful. The professionalism, kindness and, of course, skill exemplified by Frank and his workers made a very stressful situation much easier to bear. The carpenter, Craig, is a master at his craft! We are very pleased with our kitchen remodel and wouldn't hesitate to hire them, again, in the future. Thank you, again, Frank! Best Wishes.

Perfect. Craig showed up at 9:02 for a 9am appt, examined the door and got right to work. He was done and the lock was installed within 30 minutes. He cleaned up the mess and was gone. I also scheduled this appointment about the night before and it was no problem. Highly recomend!

Description of Work
Needed a smart lock deadbolt installed including widening an existing hole in a wooden door.

Excellent . Guys came on time. They were courteous and efficient. Would definitely hire this company again.

They were FANTASTIC. They came on time. They were clean. They always cleaned up at the end of the day. The work was great.

Description of Work
Re-calked and sealed a bathtub. Replaced faucets on tub. Sheet rocked, pained a ceiling in a foyer and put back up a light.

I hired First Class Home Renovations because, in their Angie’s List profile, they claimed expertise in treating the mold in my bathroom, in fixing any leaks, and in restoring the bathroom to its prior functionality. When Frank Bianco came to my house and reviewed the project, he seemed to have a good understanding of what was required and made suggestions, such as a venting fan, that would help prevent future mold problems in that room. I, however, found that the crew he assigned to fix my bathroom didn’t have the same understanding or attention to detail as I had come to expect from my interaction with Frank. The men were all courteous and respectful and did a good job of keeping our cats in the house as they (the workers) went in and out. But, as I monitored their work and checked in with them about their progress, I became concerned about the completeness of their work, particularly after one of the workers told me that they weren’t going to remove the moldy wallpaper from the bathroom ceiling, even though the project proposal from Frank explicitly said that that would be done. I asked Frank about that, which seemed to annoy him because he told me to only talk to him about the progress of the project. I don’t know how he would have known if the workers removed the ceiling wallpaper before they put sheet rock over the ceiling because I didn’t see him in my house after his visits to prepare the project proposal, not even to collect payments the came due in the midst of the project. There were also problems with details that needed to be addressed after the workmen said they were finished, including replacing the wrong window treatment bracket, even though the one that needed to be replaced was hanging by only one nail, poor coverage for parts of the paint job, poor water pressure in the shower head, a screw missing on one side of the shower curtain rod, and no in-the-wall soap dish after they re-tiled the shower, even though there was one before they removed the old tiles. This delayed the completion of the project, and our getting full use of the bathroom, by about a week. I also feel that Frank should have been better about tracking the payments I made. At one point, he accused me of trying to cheat him out of $3000, during a discussion about my holding onto the last payment until we were “satisfied” with the work his company had done. It turns out that he hadn’t credited me with a check for the mid-project payment he had told me to give to one of his workers. It had cleared the bank several days before this conversation, so he should have known about it. He later apologized for his tone, but he has not apologized for his accusation. I doubt we will hire First Class Home Renovations in the future. Since Frank said that he thought I was “picky”, I don’t think he’ll mind not having to work for us again. He also shouldn’t be surprised by my comments, since I wrote to him about them, either by e-mail or by text, during my bathroom renovation project.

Frank and his crew were very professional and their work was excellent. The plumbing repair was difficult to get to and required another tool that had to be purchased, but they didn't give up. And the carpentry was perfection! After the carpenters and plumber were finished, Frank stopped by to pick up payment and do a walk through to make sure everything was completed to my satisfaction. I will definitely hire them again for any projects I have.

Description of Work
Carpentry and plumbing

This is the third time we've used Frank and his crew. This was the largest project to date, and it went well. Frank's guys are skilled and easy to work with. We went away for two weeks just after demolition while the construction was gearing up, and had no qualms about leaving them in charge of the house. We are super happy with our new guestroom and bathroom.

Description of Work
This time we had a bathroom floor retiled, and a bedroom and attached bath gutted and renovated

Thanks for the great review!
5.0

Flawless. They did everything we asked, and any time we weren't completely satisfied, they fixed it.

We had several projects that needed to be completed prior to the sale of our home (new shower floor, new windows, plumbing, various electrical projects, general maintenance work). The estimates were quick to be scheduled and the pricing is fair. The work was started promptly, and Frank and his team worked quickly and with quality. Frank was always accessible (we communicated frequently via text) and would respond within minutes. His team was very respectful of our space, and we trusted them to be in our home when we couldn't be. Very pleased with the work and highly recommend!