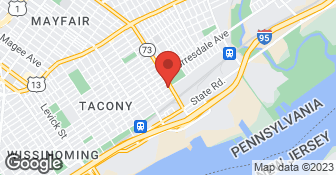 From complete plumbing fixture installations to kitchen remodels, our honest, family-owned plumbing contractor and heating contractor from Philadelphia, Pennsylvania, has your needs covered. Call upon Hophan Brothers Plumbing & Heating like individuals all throughout the Greater Philadelphia area have since 1918. You won't be disappointed with the work or the prices.  …

Fahrenheit HVAC provides a comprehensive range of residential heating and cooling services to the Delaware Valley. Philadelphia, Bucks and Montgomery County residents can all enjoy the expert and friendly services offered by Fahrenheit. From furnace repairs to central air conditioner installation and tune ups, our expert technicians are here to provide you with service beyond reproach. New discounts, deals and specials are being offered based upon the season, call today and ask what is available this week!  …

Philadelphia Gas & Electric Heating and Air Conditioning has more than 55 years in the HVAC business in Philadelphia, and is proud to serve eastern Montgomery County and parts of Bucks County, including: Willow Grove, Horsham, Cheltenham, Abington, & Surrounding Communities. Our main focus in the HVAC industry is service and installation of heating and air conditioning systems for both residential and commercial needs. We do the job right the first time and offer our customers a quality service satisfaction guarantee.  …

Jim the owner completed the job himself. He put a bucket under a faucte in the basement that he left open and was leaking. He never told us. The room he left it in was finished. I did not go to the basement for 3 or 4 weeks since he finished. I went down tonight on an unrelated issue and saw the bucket was overflowing. It must have been overflowing for weeks. There is black mold all over the walls and the rug in half the room was soaked. We have Servpro Restoration Services coming to clean up tomorrow.

Description of Work
winterizing Outside Plumbing

Mr. [Member Name Removed], As we discussed when you were texting my personal phone the other evening, I did not leave the bucket there. I have been doing the winterization and dewinterization on your house for over 15 years and have always treated you and your home with respect. After you called my office at 11:30 on a Sunday night clearly intoxicated and left a message yelling and cursing, I told you that I would have to end our business relationship. You asked if I could come show your new plumber how to properly winterize your home, which I did, because even after the way you treated me I respect my customers and did not want to leave our business relationship on a bad note. I am sorry you have damage to your home, but it was not because of me or my work.
3.0

Demolition of the bathtub and surrounding tiles went pretty well. Installation of the shower went well except for the serious defects in the bathroom that resulted from removal of the tub and installation of the shower. My main problem with this contractor is not the quality of the work itself but the fact that he did not fully explain what the shower was going to look like and certainly did not explain that I was going to end up having to pay another contractor just under $2000 to replace the drywall and tiles that were ripped out as a result of the plumbing work. Also, the shower has inadequate water pressure - a defect about which I complained at the time of installation -and I asked these plumbers not once but three times to replace the flush handle on the toilet. They never did. Someone else who was painting my bathroom said that what the toilet needs is a new flapper so that's another plumber I'll have to hire. This plumbing outfit should really work with a company that does sheetrock work both to minimize the cost and to facilitate coordination of the two projects. The bottom line is that no-one at Cullinan gave me any idea of the extra costs I would incur as a result of their work or provide a detailed explanation of what the shower unit would look like. It's just one more example of a contractor taking advantage of a female consumer.

Description of Work
Cullinan's crew ripped out the bathrub and replaced it with a shower. In order to install the shower they had to reconfigure the pipes, which added $600 to the cost.

The installation went smooth. Jim showed up on time, his work was excellent and I would call in for future work.

Description of Work
Jim replaced the toilet in the powder room.

Cullinan Plumbing is very professional. Service was excellent and everything is working perfectly. If you're looking for a reliable plumber this is one of the best.

Description of Work
Replaced a water and a shower water control

Description of Work
Jim removed my old bathroom plumbing and installed a new tub, faucets and drains. He did a neat and excellent job. Had one minor problem and he came back timely and fixed it.

Great job, would use Tim and his team any time.

Description of Work
All new plumbing - tore out old plumbing