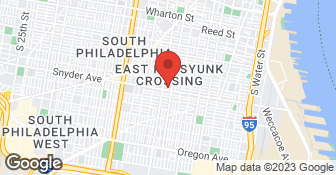 Condino Heating & Air Conditioning has been serving South Phiadelphia, Center City Philadelphia, South Jersey, Delaware County, and Lower Merion areas since 1979. We specialize in the difficult and out of the ordinary installations, including old homes that can't be air conditioned and houses that need custom duct work, and tender loving care....

Entire work crew was knowledgeable and efficient. Crew cleaned up each day. Price was 30% less than other estimates.

Description of Work
I had Central Air and ductwork installed.

thanks for the kind words, hope you enjoyed the ac this summer?
5.0

Went very well. Diagnosed problem. Ordered part and was back when we scheduled him. Fixed quickly. Price was very fair.

Condino is fantastic. I bought my HVAC system from them 5 years ago and made the mistake of having other companies service it because they charged less. When the furnace stopped working on a cold morning, one of those companies came out to diagnose the problem, they restarted the furnace and recommended I replace the collector box for $1500. I emailed the guys at Condino and got a call back within minutes. They researched the problem and explained what needed doing and ordered the right part (which was covered by warranty). When the heat went out the next morning, the owner walked me through restarting it and then came out in the afternoon and replaced the part. They were incredibly responsive, thorough and fair. I will never use anyone else again.

Description of Work
There was a problem with the heat exchange on my furnace. They replaced a part and fixed the problem.

UPDATE (4/17): A/C worked well on the first warm day of the year, so no complaints thus far on the workmanship. However, it seems that the communication problem is worse that I thought in my review below. I was told from the outset that I woud need to hire a roofer to put a permanent seal around where the roof was cut for the ductwork, so I have no problems there. However, after having that roofer return multiple times to correct an on-going leak, it became apparent that the problem was actually a lack of seal in the ductwork itself. When I called Condino to report this, they basically shrugged and said this was the roofer's problem. I spent $10K on their work and for that I got no apologies, no offers to make it right, only an implication that somehow I was supposed to know that. If I had known from the outset, there would be no problem- I'd just tell the roofers to take care of that while they were up there. Instead, this is surely going to cost me another couple hundred dollars to bring them out for a separate job. This isn't enough for me to say they did bad work- again, the A/C itself is great- but it sure leaves a bad taste... ORIGINAL REVIEW: I cannot speak highly enough of the quality of the work done. The workers were thoughtful and creative in the solutions/strategies they designed and the result was a system that is nearly invisible and consumes only a negligible amount of closet space. They did the job in a way that other contractors said was impossible and did so at a price only slightly above what others quoted for vastly inferior solutions. Summer has not arrived, so I cannot speak to the effectiveness of the system (and I will update this review at that point), but aestetically, it has surpassed my greatest hopes. In addition, the job was done quickly and in a highly professional manner. There was not always good communication regarding the days that work would start or be performed- if I did not work from home, this may have been a greater problem. However, as it stands, I had a very positive experience and would recommend Condino to others.

Description of Work
Had central air, including a roof-top unit installed. Ducting was installed to 3 bedrooms and a bathroom on the 2nd floor and the living/dining room and kitchen on the ground floor. Finally, venting was provided to a fan in the bathroom.

Great experience from bidding through punch list. Initial home visit to start to prepare bid happened to fall on a stormy night. Power was out, but still did the inspection, flashlight in hand! Bid was prepared with multiple options as requested and competitive with the other bidders. Between bid award and install start, Hurricane Sandy came through the area which caused a small delay on our part, but inconsequential. Once installation started, the crew was always prompt, professional, helpful, pleasant, and trustworthy. They were always on our job, not hopping between jobs. Always made sure we had heat when they left for the day when the weather turned cold, despite a complete removal of the existing equipment. Cleaned up well and the post install follow up is excellent. It works really well too!

Description of Work
Replaced furnace and A/C. Designed and installed new ductwork in attic completely replacing what had been there. HVAC system has four zones. All old equipment removed.

Everything went very smoothly. The installation took place within the timing described and the plumbing work was not just good - it was 'elegant': very neat, good looking and took up very little space. I was very pleased

This is our second experience with Condino. The first was last winter when we had problems with our furnace during the blizzard; this time it was our AC. Rob came to our home both times...he remembered us, our home and the little details related to his first visit. In both situations, they responded quickly, diagnosed the problem and gave us a more than fair quote for the parts and labor. Not just very professional, but friendly, too. I would absolutely recommend this company to anyone who needs AC/Heating services.

Description of Work
Replacement of motor and wheel in central AC unit.

They were prompt, did a fantastic job, and were honest when it came to pricing. The employees were also very nice and knowledgeable

Description of Work
They installed a whole HVAC system.

I was told that Rocky would contact me and give me an estimate for the job. It was explained to the person I spoke to that there was a time issue involved as the unit was in the way . Rocky never bothered to call back.

Description of Work
I needed to have an air conditioner disconnected for some work that was being done in my yard. The unit would then have to be reconnected when the work was done.

Member did call my office on April 24th ,and did recieve a call back the next day from myself , I left a voice mail on the number he left and did not recieve a call back . We would not of been able to help him any way ,since he was in a emergency situation. Jobs like this should be scheduled in advance and not expected to be done quickly , maybe his contracter should of given him some advanced notice of what needed to be done when he started. Rocky Condino
5.0

They were very specific in the time and what was to be done each day . Installation of both units went smoothly . They were very thorough and detail oriented and clean . The owner of tyhe company checked in during the process and again at the conclusion to see if I was satisfied with the install. I was extremely pleased and would use thewm again and recommend them .

Description of Work
I contracted to have new heating and central AC installed in the house. Old systems were over 30 years old. This required new duct work and reconfiguring the locale of the new units .

Creative Comfort Solutions was created to provide homeowners with large company expertise and reliability, but with small company quality and customer service. We created a system that ensures every customer is treated as if they were our first. We are fully licensed and insured. We specialize in providing high efficient heating and cooling solutions for your home. Our philosophy is to work with the homeowner to create the perfect balance of long term efficiency and up front cost. We realize that every customer's situation is different and we take the time to determine what the best match will be. Our goal is to provide every customer with exceptional service for the life of the system. Our founder Russell J. Notte was born in Norwood, PA. He currently resides in Glenolden, PA. Russell has 15 years experience both working for and owning part of a very large heating and air conditioning company. The experience he gained both in the field and the office allowed him the opportunity and expertise to start this business. Below are some licenses, certifications, and accreditation he has received throughout his career.  …

No, Condino Heating & Air Conditioning Inc does not offer a senior discount.