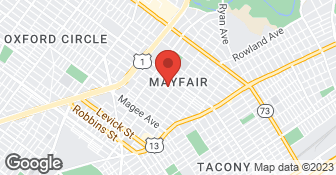 We do not use subcontractors....

Description of Work
We had a pipe burst in our home which knocked out the ceiling, two walls, and some flooring and the baseboards. Mike and Dave came in and repaired everything for us. Mike even helped us with an additional task. They did a great job. The repairs look amazing. 1st Capital will be our go to company from now on. (I gave them a b on punctuality simply because Mike has another job, so if you need something done immediately, he may not get to it for a few days - but well worth the wait.)

Mike came our and assessed the situation. He quoted us a price and did not try and rip us off. He was easy going and willing to work around our schedule and made sure to ask all the right questions. When he and Dave came in to do the work, they covered everything with tarps and cleaned up after they were finished. The place was immaculate when they were done. They repaired three parts of our ceilings, rebuilt two walls, repaired our floor, and added baseboards that had to be removed from the flood. The baseboards are so close to the seventy-five year old originals that you can hardly tell the difference. The entire time both gentleman were consummate professionals. The only reason I gave them a b for punctuality, is that this is their side business. If you need something done immediately - they may not be the company for you. However, their work is well worth the wait of a day or two. Hire them - you won't regret it!

Description of Work
1st Capital Construction repaired our ceilings, walls, floor, and baseboards after a leak. They also fixed a problem with our small roof over the window and repaired the ceiling there as well.

They came out very fast. He surveyed the job and had his plumber that was working for him fix the pipe.

Description of Work
He came out and surveyed the situation.

Mike was great to work with and his work exceeded our expectations. We definitely would use him again in the future. Approximately 60% of the cost was for the labor with the remaining 40% for the materials.

Description of Work
We had several carpentry related projects that needed completed quickly on a house we recently purchased. Mike installed a new wood railing and banister from the first floor to the second; built a hall linen closet; installed (3) new bedroom doors, which required work to the door jams as well; and installed a new set of wood stairs from the first floor to the basement.

It was my first time using them and it was fine. He came, gave a quote and did the job.

Description of Work
1st Capital Construction installed an interior door and did some plaster work.

We had three new windows replaced. Everything went well and we were very satisfied. We then described a problem with our roof. He went up and found that the previous roofer did a partial job. We also had a leak and no one was able to find the problem. When the siding was replace by another company, the capping was place over rotted wood. 1ST CAPITAL found the problem, fixed it and the leak was gone We have refered friends and relatives and would definetely use tham again.

Description of Work
Windows and roofing

I used Mike Rodgers, proprietor of Capital Construction, on three occasions for repairs to my home which included extensive water damage caused by Hurricane Irene. These jobs were in November 2011 and in March 2012, and included dry wall replacement, roof, drainpipe and gutter repair, ceiling replacement, and repairs to and sealing of a large front window with a copper roof. Mike was prompt and courteous, and stood behind his work. He did this at a time when most roofers and contractors would not even give you the courtesy of a return call. (I presume because of the huge need for repairs following Irene.) Mike identified problems with the roof, and fixed these, identifying problems that a "roofer" had not. When I asked him to identify and fix leakage around a large front window, he came in and sealed the areas around the copper roof and window he repaired and sealed these. When the leaking continued about two weeks later, I called him, and he promptly returned and addressed the problem without charging anything further. It has been watertight since that time. I would not hesitate to recommend him.

Description of Work
Repairs to home which included extensive water damage caused by Hurricane Irene. Dry wall replacement, roof, drainpipe and gutter repair, ceiling replacement, and repairs to and sealing of a large front window with a copper roof.

Very professional, clean and punctual. Will definitely have them come out again to do the other repairs in my home.

Extremely well! They showed up on time and got right to work. When I came back to check on them around lunch all the windows had been installed and they were working on the capping. They were also done with the demo on the kitchen and were cleaning it out. They stayed late that night and when they came back the next day they were done by 3pm. The work was top quality....they know what they are doing and they do it well!

Description of Work
New windows with capping and new kitchen

Property Recovery 911 specializes in residential and commercial emergency restoration services. Our restoration technicians are trained to the highest standards and we employ state-of-the-art equipment, materials, and methods to deliver unparalleled results. We are constantly striving to provide the highest level of professionalism, exemplary customer service and rapid response when called upon to assist in an emergency situation. Offering prompt, professional emergency services that include water mitigation, fire restoration, mold remediation and biohazard cleanup; our certified specialists are committed to assisting victims of disaster protect their interests by quickly removing the source of damage and starting the restoration. Owner/operator Paul Messa is intimately involved with every job awarded to Property Recovery 911, ensuring the highest degree of quality control resulting in the best possible outcomes. Our workforce consists of long-term associates with whom we have established and maintained a close working relationship. Developing and nurturing this rapport within our ranks through loyalty, fair compensation, and mutual respect has helped us to acquire and sustain an outstanding crew of dedicated specialists. We provide comprehensive solutions to our customers resulting in a seamless work cadence and superior outcome. We are available any time of day or night 365 days a year with 24/7 live phone support to efficiently mitigate losses and help curtail additional damages. Direct insurance company billing is available, allowing our customers to concentrate on more important matters. Our commitment to excellence is not lost on our customers. Property Recovery 911 is the clear choice to deliver outstanding results at a reasonable price. For more information, contact us at (267) 808-7200.  …

We are a fully insured company serving Montgomery, Chester, Delaware, Bucks and Philadelphia Counties. We do residential and commercial, interior painting and exterior painting along with power washing. We do offer many other services, just ask! We guarantee our work and references are available upon request. Please call us at any time for Dan to come meet with you for a free estimate. We are also a registered company with the state of PA - PA158839.  …

We have the experience and dedication to get the job done right! Specializing in painting and wallpaper services; We guarantee your satisfaction, and we won't leave until the job is done right. We pride ourselves on the quality work we provide, while delivering great customer service! Call or click for your FREE estimate today!  …

Bonded
Insured
All statements concerning insurance, licenses, and bonds are informational only, and are self-reported. Since insurance, licenses and bonds can expire and can be cancelled, homeowners should always check such information for themselves.To find more licensing information for your state, visit our Find Licensing Requirements page.
General Information
Free Estimates
Yes
Eco-Friendly Accreditations
No
Payment Options
Check
Senior Discount
10%
Warranties
No

1st Capital Construction is currently rated 5 overall out of 5.

No, 1st Capital Construction does not offer eco-friendly accreditations.

No, 1st Capital Construction does not offer a senior discount.

No, 1st Capital Construction does not offer warranties.