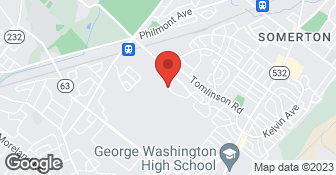 The pros: Mike was able to start the next day. He and his helper, Leon, appeared to be doing a very good job taping and mudding over two days. The cons: Unfortunately, when it came to the end product (sanding, ensuring that patched areas blended well, doing touchups, etc) Mike's performance and professionalism dried up and disappeared. Two of the patched ceilings were left with glaringly obvious outlines of the patched areas. A 3' long run of tape in the hallway was separating from the ceiling. Multiple areas were left completly unsanded where it badly needed it. I began pointing these areas out to Mike in person, but all he would say was that it "looked great" and that I got a great deal. I asked Mike if he could come out to fix the issues at hand. He responded that he was very busy and that he would have to charge me to fix the areas in question. In the end, I had to complete the job myself. This included: Re-mudding the patched areas (each around 3'L x 1'W) so they would blend in with the ceiling. These took two further coats of mudd each. Fixing the failed tape job in the hallway Finding and sanding all the areas Mike missed, which were many.

Description of Work
I hired Mike Kaufmann to do the finish work on a small drywall job I needed to complete. The job consisted of taping and mudding one small room, a hallway ceiling, and finish patch work in three other ceilings. The drywall was already hung and ready for finishing. We agreed on a price and that the end product would be ready for paint when finished.

As a locally owned and operated business we feel invested in our clients and constantly strive for customer satisfaction. We won't leave until the job is done right! Call 267-767-2947 or click to schedule an estimate today!  …

Our focus is to provide the best quality in Paint and Cleaning services for our customers. Over 4 years we have reached many new customers who were referred by other happy consumers and now we decided to advertise online to reach new customers, expanding our business. Punctuality, commitment, responsibility and quality is what we offer. We offer Painting, Cleaning and handyman services. May God bless all and may we always offer the best for you and your family. Oziel and OZ Painting & Cleaning LLC team.  …

We specialize in interior painting , drywall, interior finishes and more! We guarantee your satisfaction, and we won’t leave until the job is done right. We pride ourselves on the quality work we provide, while delivering great customer service! Check out all the services we offer below and call -or- click to schedule a free estimate and 10% off on the first job!  …

Insured
All statements concerning insurance, licenses, and bonds are informational only, and are self-reported. Since insurance, licenses and bonds can expire and can be cancelled, homeowners should always check such information for themselves.To find more licensing information for your state, visit our Find Licensing Requirements page.
General Information
Free Estimates
Yes
Eco-Friendly Accreditations
No
Payment Options
Check
Emergency Service
Yes
Warranties
Yes

******* NJ REGISTRATION # 13VH07606500 ******* Serving All The Jersey Shore With Reliable, Dependable And Great Prices Nobody Can Beat Our Price Or Our Service All Work Completed By Drywall Professionals 100 % Drywall Contraction Service

******* Kaufmann's Drywall By Design ******* offers the following services: ******* NJ REGISTRATION # 13VH07606500 ******* Serving All The Jersey Shore With Reliable, Dependable And Great Prices Nobody Can Beat Our Price Or Our Service All Work Completed By Drywall Professionals 100 % Drywall Contraction Service