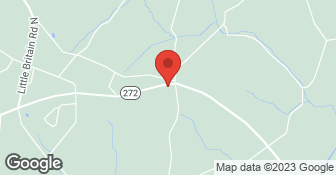 Let's get your home sidewalk and you driveways clean! I use proper equipment and supplies for every job to ensure each client gets the service they deserve. I ensure that I am on time neat and clean, well organized, polite and well spoken. Call or or message me to schedule a time suitable for you, and for pricing and further details. When your house is finished it will be ready for the early fall and spring season cook outs or the market.  …

Description of Work
This family-run business is excellent. Brian will not perform work you don't need and does a great job when you do need it.

Bob came out the same day he was called to take a look at the project we wanted him to complete. At issue was an improperly wired attic that had been wired by an ex-husband who had worked in construction and fancied himself knowledgable about all things construction related. There was an electrical line that ran from the basement up the outside wall of the house, through a window, up to the rafters, and over to an electrical box. Lights in the attic were operated by a light switch, but it was not known how the box was wired, or anything else in the attic. The window through which the line was being run from the outside was being completely restored, and the grossly not-up-to-code wiring had to be eliminated. Bob indicated he would be back in two days to work on the issue, and he was. Trying to determine what the rat's nest of wiring that was found was actually connected to and functional was the worst part. It also at times required more than one person to determine, since someone had to be in the attic, one on the first floor, and one in the basement, so we could relay information to each other, rather than have Bob running up and down three flights of stairs. Once that part was settled, Bob had to tackle an electrical box that was a fire hazard because it was never properly completed. Running some new line was also required, but we had new line available so he did not need to provide any. We also had much of the other material he needed, so all he had to charge us for in the end was labor. Since my husband worked with him the whole time and assisted, he also took that into consideration, so the bill was much smaller than it likely would have normally been, given the amount of time Bob had to spend on the project. The end result is an attic that is now properly wired with wiring that is not a fire hazard anymore! Additionally, Bob has completed a number of other projects around the house in prior years, before I joined Angie's List, and has always done a good job - whether it's getting a yard tractor to run, installing plumbing fixtures, putting in ceiling fans, finishing drywall, painting, or doing minor carpentry. If the work is something he doesn't feel comfortable tackling, he knows MANY other related businesses in the area, and who does good work, and who doesn't, so can provide suggestions or alternatives. This is a direct result of having managed a hardware store in the area for over 20 years, so is very familiar with the associated trade and the people in it.