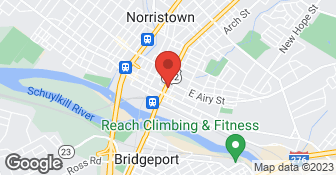 Could not recommend this company more. We spent three weeks trying to get a company that had already come out to send us the quote before I gave up and called David. No answer which had me concerned but I left a message. He called me back the same day and was out to see the work needed the VERY NEXT DAY. It had taken three weeks just to get the first company out. Responsiveness was amazing. After doing the assessment, David called me the next day to let me know pricing and that they would need a week or so before they could come out. Considering we had already waited 6 weeks on another company that never procured a quote, we gave it a shot! His guys showed up 3 minutes BEFORE the stated time and got to work right away. In about 2 hours all the gutters were firmly re-attached to the house and all the exposed wood is now covered and protected from our next rainstorm. They also cleaned out the gutters while they were here. And we have a guarantee on the porch leak for the next year to ensure the problem is properly fixed. Couldn't be happier that we gave America's Best Roofing Company a call.

Busy week here with all the rain and noticed my downspout wasn't flowing correctly. Sent a message to David and had a quote in less than an hour. David was responsive and had me up and running before the next storm. I wouldn't hesitate to hire in the future.

After not being able to no longer use my old roofer due to undependability, I contacted Dave and as soon as there was a good break in the weather, His crew came right out as soon as a good day came up. Found other issues after removing the shingles and repaired the damaged woos underneath and redid all the flashing. 2 major downpours and no more water in my front window or basement. I already had them clean out a gutter and now gonna have them look at my sisters roof for replacement. Best thing is knowing I have a go to roofing company again.

Description of Work
Shingle replacement on front of house.

Description of Work
Roof touch up

Company did not respond at all

I am very sorry but I did not receive a message from you how did you send it was it through an email or a phone call again I do apologize if you are still interested I would be glad to come out please contact me through my office. Thank you David Hoch
5.0

I requested photos of area to be repaired and they were provided with no problem. All work was done as described with a detailed explanation and a written guarantee was provided with suggestions for future maintenance. I also referred them to my church for an estimate of repairs.

My roof was leaking into my son's bedroom due to a busted drain box and a ton of snow. I had another company out previously who blew me off and told me it was just because my gutter was clogged (which it wasn't). When the problem kept happening, I called this company who came out right away and identified the problem. Because of all the snow & ice and the freezing temperatures they had trouble finding a time when it could be fixed, but they came out once or twice when I called them after it snowed and cleaned the snow off my roof as a courtesy until they could actually fix it. Once there was finally a warm day above freezing they came out that day and repaired the problem.

Description of Work
Flat roof repair, rubber coat and tightened and replaced some slate. |I was very pleased, David, the owner showed up when he said, and repairs were done neatly.

They did a very nice job.

Description of Work
They cleaned my ducts.

David did a good job, as I have not had a leak in the past 2 years since he did the repair. He even offered to show me what he had done (which despite my dislike of heights I did, after the previous contractor was unable to stop the roof leak on two occasions). Incidentally, I chose this contractor based on an advertisement in one of those coupons packs (wish I had known about Angie's List then) partially because they claimed to be a flat roof specialist. It seems to be a much smaller operation than I originally thought, but turned out to be a good choice.

Description of Work
The owner David came out to repair my leaking roof, which had been replaced the prior year by another roofer (see my review of East Coast Solutions). He tore off the end of the roof (it's a flat roof and is meant to slope to the corner) and adjusted the slope and replaced the torch down roof in that section. He also replaced my spouting which was damaged at the gutter box.

Residential Plumbing & Drain Cleaning Service. Owners have over 30 years of experience. Proudly servicing Montgomery County, Chester County, Delaware County and lower Bucks County with professional, personal and timely service. Guaranteed respect for you, your time and your home. No job is too big or too small. Call us today for Expert Service, Quality Products, and Affordable Price!  …

We specialize in gutter cleaning and more! We guarantee your satisfaction, and we won’t leave until the job is done right. We pride ourselves on the quality work we provide, while delivering great customer service! Check out all the services we offer below and call -or- click to schedule a free estimate today!  …

AMERICA'S BEST ROOFING is currently rated 4.9 overall out of 5.

No, AMERICA'S BEST ROOFING does not offer eco-friendly accreditations.