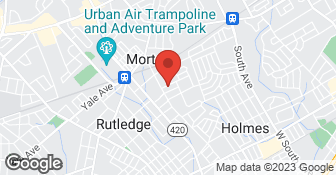 We repair all makes and models of appliances, heating and air conditioning. We replace water heaters and service all ac types. ...

At Kowall Electric, LLC we provide safe reliable electric wiring services for all your electrical wiring needs. We are extremely experienced in troubleshooting and handle hundreds of these types of calls a year. We can handle upgrading electrical services, new lighting, landscape lighting, whole house rewires, TV mounts, surge protection, Cat5/6 wiring, and other type of electrical you may need in your home. We are a registered electrical contracting company in Pennsylvania and carry professional contractor liability insurance for all our projects.  …

Our Philosophy at Brad Brown Electric is all about putting you- the customer- first. By putting the focus on our customers and the integrity of our work, we are driven to deliver the highest standard of electrical contracting services that are precisely planned, efficiently executed, neatly completed and with as little impact as possible on your home.  …

Super Service Award Winner 2011-2016! On-time AND 100% satisfaction guarantee. Live customer service 24/7. Third-Generation owned and operated since 1955. Financing available. On-time Guarantee: If we are one minute late for your scheduled appointment window we waive our $59 service fee. 100% Satisfaction Guarantee: If our electrician smokes on your property, uses profanity, leaves any mess behind, fails to use floor savers your service is completely FREE. If you are not happy with the completed, work we will redo the work or refund your money. Certified Tesla charging station installer.  …

Had to book a week in advance, but freezer was staying frozen and there was not much in fridge so I went ahead and booked on the strength of the reviews. Tech came out on scheduled date, checked it out and informed me freezer door must have been left slightly open (I was away) and let ice build up in vents that moved cold air from freezer to fridge. Told me to defrost the machine (and told me how), only charged $20 service fee! Working fine now.

Description of Work
Refrigerator was too warm, freezer too cold and full of frost.

bobs came out and got me going on a 30 degree day. Very good work and would hire again

Description of Work
Heating system was down

Went great. Both were working within an hour.

Description of Work
Refrigerator and heater

Very well, Installed new part and had dryer heating inside of 20 mins.

Description of Work
Repair Dryer. Dryer was not heated.

Bob's son showed up. He opened the newer dry in the back, put meter on the wire in the back, and said "No Power". Then proceeded to go to the next dryer and came up with his diagnoses. I was being nice, just having a conversation while he worked, and he was very standoffish, didn't want to be watched. He wanted me to stand on the opposite side of the house, and he could fix the dryer and he has the parts in the truck, but he wound up leaving in a huff. Fed up with bad appliance repair men, I went to do research on YouTube to find out what the problem could be with my dryers, and I learned a lot. But what was strange, is that every video for my newer dryer model was opened in the front, no the back. I opened the back of my dryer, and in fact there were no sensors back there, and the wire he tested was for the dryer light, you know... the light that comes on when you open the dryer door, that light. And since the dryer door was closed, the light was off so there was in fact "No Power" to the dryer light. In addition, for the other dryer, I had someone else diagnose it, and it was different than what "the son" told me, and he showed how that piece was working correctly. Wow, not only did he not know what he was doing, he was going to have me pay to have him keep paying for new parts in the dryer until it worked.

Description of Work
I have two dryers that stopped working.

Great! Technician called before he came over. Was very professional, courteous and helpful. Great service and a great price. Will definitely use again.

My electric dryer as squealing. Bob came out promptly and repaired.

Excellent customer service and knowledgeable . Called at 8 am. and had repairman out and fixed by 9:10.

I called for an appointment to have the tech come out and repair our refrigerator. I left a description of the problem on the answering machine at Bob's. My call was returned very quickly. When I spoke to the tech. on the phone and described the problem my refrigerator was giving us, running warm, he said he would be glad to come out, but the fix would be a simple "do it yourself", if I felt I could manage it. Well, it was simple for me to do, I did what he said and our refrigerator is back to running tip-top! Now that is excellent customer service, folks!! He could have easily came out and charged us for a repair and I would have been happy with that, but the way it went was terrific and Bob's Appliance Repair of Morton, PA has gained a customer for life. Honest and professional. Thank you Bob's Appliance Repair!

The technician arrived on time, 7am, diagnosis took five minutes, and the problem was fixed in fifteen minutes. He had time to look at a dryer that wasn't working well and he fixed that too. We are planning on calling him again this week to look at our dishwasher!

Description of Work
Our refrigerator and freezer were not staying cold. He replaced the heating element.