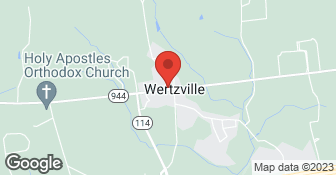 We are Rogers Paving & Construction. Family owned. We are the driveway specialists. With over 30+ years of combined experience in paving and excavation, we have the experience for your next driveway or paving project. We provide free driveway estimates in the Grantville, Lebanon, Jonestown, Palmyra, and Hershey PA area.  …

Willie's Paving has been serving Harrisburg, York and Carlisle PA since 2000. Our experienced staff offers reliability and quality that you can trust. Estimates are always no charge. No job is too big or too small. William Stanley the owner has been paving since he was 16 years old. Of course they are licensed in the state of Pennsylvania and are fully insured.  …

My name is Joshua, I am the owner and operator of Pave-On Asphalt Services. My family has been in the asphalt business for three generations. Our super service award says a lot , the only negative reviews our company has is work not performed for those customers, We take a great amount of pride in the work that we do and customer service is our top priority. I provide free estimates. Please contact us today! We do parking lots-paving-sealcoating-grading-pipe installation-pot hole repair-crack filling-water drainage-excavation-and more!!! Let our group of asphalt experts help meet your asphalt needs and more importantly your BUDGET!!! SAVE-ON WITH PAVE-ON!!!!!  …

Morris did everything he said he would do and did a great job.

We had this company come over and give us an estimate of blacktopping an additional parking space. It was all stoned and dug out they just had to come black top it. Original they gave us a price of 1150 but then they said if we could let them know asap they would give us a discount of around 170 dollars. We were very pleased with the price and had them go ahead and do it. They came in a very quick time line and got the parking space blacktopped. It was done very quickly and they definitely did a great job for the price. They accepted checks so I gave them a check, and was very pleased with their customer service and friendliness. I would definitely have them come and do another black top job if I had one to do. Really Enjoyed this company and absolutely would have them again if I needed something to do.

By February 2010 the new surface was crumbling and being torn up by normal residential traffic. They were 4 hours late in arriving, significantly underestimated the time to complete by approximately 4 hours, and had no provision to complete the job under dark of night until we the homeowners brought out spotlights, flashlights, flares for their equipment now backing out onto a busy street, and helped guide them down the dark driveway. After numerous attempts to contact them and significant delay, they finally agreed to put a sealer on driveway at no charge. That did in no way solve the problem and we have a pitted and lumpy driveway yet. We gave up trying to deal with these evasive and unprofessional people.

Description of Work
2" coating of asphalt added to existing driveway. Our invoice was actually from "Quality Paving" of 207 S. Filbert St., Mechanicsburg, PA 17055. Phone 717-648-5595. Signed by Joseph Stanley who said his father was from "S&M." I could find no listing specifically for Joseph Stanley's "Quality Paving" so have opted to put the review on the father's company. The father actually drove the roller and seemed to be physically heading up the work, but let the son, Joseph, take the lead on our discussions.

Morris came to talk to us and give us an estimate. We requested the estimate in writing. We waited for a couple of weeks and my husband called him again. I wanted to forget it, but my husband wanted to follow up. I was skeptical. After all this is a BIG driveway. In the long run we got a very good job, exactly to our specifications, and at a little less than others. My husband spent 2 days keeping tabs on the job making sure we got what we wanted. Morris never suggested checking on a permit which I found was necessary in our township, as was an escrow payment of $500 to guarantee no damage was done to the township road by the contractor. I personally took care of both. Overall, if you have the time and persistence to work with him and get it all in writing, you will probably get a good job at a reasonable price.