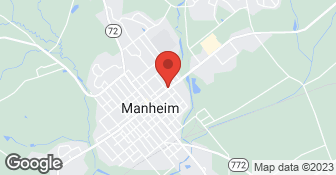 When it comes to your home and property, we understand the importance of excellence and integrity in workmanship. This is why you will find one or more of the Shirk Brothers owners at all jobs, large or small, to ensure that each customer receives experienced project management and expert installation. Shirk Brothers is a family-owned and operated roofing contractor serving the Lancaster, Exton, West Chester, Berks, Lebanon, York and Harrisburg areas of Central PA. Our team of three brothers brings nearly 25 years of collective experience to your exterior home improvement projects. We specialize in roof replacements and exterior installations using high quality materials while still keeping an eye to affordability for our customers. Additional DBA - Shirk Brothers Roofing. Owned & operated by Ron, Randall & Dean Shirk....

This was my third or fourth project with this company. Excellent workmanship. They’re honest, do what they say they’re going to do they’re easy to work with and meticulous with cleanup. Very pleased!!

Shirk Brothers is a great company that does an excellent job!

I have used Shirk Brothers on several projects, both for business and personal properties. Their prices are in line with other reputable companies. I choose them because they have good communication and high attention to detail. They make sure things are done correctly and are willing to meet special requests.

Best contractor I have ever used. Very neat . Very professional. Would not hesitate telling everyone about their work.

They did an amazing job, very quick also!

The roof itself appears to be well done. Cleaning on the inside of the building was horrible. Nails and boards all over the place. I found nails outside as well. Outside the huge holes in the lawn from their lift. I spent 25K on the job and expected more.

I could not be more pleased with the workmanship of Shirkbrothersroofing. They were willing to make an adjustment after partially completing the work. They did it with a smile even though I am sure it was a pain. The work ethic demonstrated by the crew at our home was outstanding. We have had other roofing companies in the the past, none of them compare to Shirkbrothers. There attention to detail is excellent. If you want a good roof put on with kind and personable people, you cannot go wrong with this company.

Description of Work
We had a new roof put on as well as replaced an existing roof.

Quote was straightforward, detailed, and easier to follow than some of the other vendors with no hidden fees. Communication before job start was great and they started job when they scheduled it. Installation team was friendly, cleaned up really well and helped my elderly neighbor. workmanship was excellent.

Where to begin… Attention to detail. Craftsmanship. Knowledge. Quality (an often overused and sadly becoming a meaningless term). Friendliness. Fair. These are just some of the traits of this family owned business. I researched roofers before I selected Shirks. I was impressed with their Angies List ratings, and what was even more impressive to me was the fact I had to wait several months before they could schedule me. Being in demand means, to me at least, that they are busy and probably from word-of-mouth satisfied customers. My project involved replacing an existing 20+ year old roof on a 100+ year old house, and roofing a new porch I built (I’m an avid DIY’er). I originally planned to use steel roofing on the porch and when I resided my house, planned for this with the way I ran my flashing. They were able to work with, around, and replace what I did without issue, even though they were probably wondering “what the heck did this guy do?”. The roofer 20+ years ago replaced a slate roof with 5/8” plywood and 3-tab. My roof is 12/12 pitch with a dormer that’s probably 24/12 or steeper, and pretty much covers 1 1/3 stories in height (it’s steep!). There’s a walk-out basement out back, making the roof 3 stories up out back, and the land slopes down to a brook giving you the impression you’re WAY up there! The original roofer and his crew were scared to be up there - it IS high, and his crew quit one by one on him because they hated being up there. These guys didn’t show any fear of heights. They found where the original crew didn’t butt or edge the 5/8 plywood correctly, and fixed all of that, including what had become a nuisance leak in a dormer valley (where the plywood didn’t meet, and the gap was bridged with one thin piece of tar paper and one shingle layer). They also fixed the edges of the rakes of the original plywood before installing the drip edge to even them out. The week after they completed the roof, we received the heavy downpours and wind, and the inside of the house remained bone dry, and believe me, I was checking! My crew was the five Shirk brothers and two others. All of them worked well together without any of the squabbles my own brother and I would have had! Oh - I grew up with a working-class father who treated contractors as people, and I firmly believe in treating all people as I would want to be treated. I opened my bathroom to them to use whenever they needed it, and none of them made me regret this decision. They were appreciative of this hospitality and voiced their appreciation numerous times. Did I mention in the beginning they were friendly? I would recommend these guys anytime, anywhere and have a stack of their cards to hand out to anyone in my area that needs roofing work done (my own detached garage is pending for April). If anyone wants more information on what these guys did for me, please drop me an email at misc@mailme.us.

Getting the job done right and on time is important to owner, Robert Sheehan. Robert claims his great rapport with home owners is because his goal is to earn his customers trust and respect; to communicate effectively and to get the job done to his customer's satisfaction. Robert states, "My customers are my priority and I treat their home as if it were my own". Sheehan Carpentry & Remodeling serves Lebanon, Lancaster, Berks, and portions of Dauphin County, PA and is your professional choice for your next home improvement project. From custom remodeling, and home additions to decks, porches, siding, garages, and more. Call us today for a free estimate and begin to enjoy the beauty and comfort of your home.  …

We are a family operated exterior residing business offering replacement of siding, windows doors gutters and etc. with over 20 years experience in the field. We offer top quality workmanship, superior service, and reliable products installed by our own experienced crew. Our motto is "Quality Workmanship that Speaks for itself" We are "A company of integrity doing service as unto the Lord."  …

Shirk Brothers LLC is currently rated 5 overall out of 5.

No, Shirk Brothers LLC does not offer eco-friendly accreditations.

No, Shirk Brothers LLC does not offer a senior discount.

Are there any services Shirk Brothers LLC does not offer?