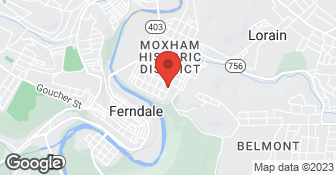 I am a dedicated hard working individual. I have several years of experience building whole houses but am now at a point where I want to do the smaller projects.  …

We have been in the roofing industry for awhile and started to specialize in metal roofing. We offer quality work and warranties at a very reasonable price. We accept credit cards and offer financing. Give us a call today.  …

RCS of Altoona specializes in metal and shingle roof installations! We have partnered with Blair Metals Co to fabricate all of our metal needs in-house, supplying our customers with top quality metal roofing at very affordable pricing, by cutting out the middle man. Guaranteed to beat any competitor pricing!  …

The repair didn't go well at all from Johnstown Painting Services. (JPS) OWNER J. Brian Stoko I specifically wanted and told JPS I wanted my roof step flashed, because the original contractor used solid flashing and my roof had leaked the last winter. JPS said they can do the flashing and asked about siding work too. I told them I can do siding myself, but give me a price. I had had already purchased the following materials to minimize expense and time. I had shingles, ice guard, house wrap, j-channel, corner channel, siding, and siding nails. I did not have the step flashing and roofing rails. I was quoted $2.800 and I told the Contractor (NO WAY!) I will do it myself. That I had 95% of the materials. He dropped to around $2,000 and I said I will think about it. He said he can do it for $1,500. I told him I will still need to let him know. When I had no one else to turn to, to do the work I called JPS and said I will take them up on the quote. This time the roofer guy for the company came out and suggested not to do sub structure repair that it wasn't need. So they took $200 off. So the Estimate was $1,300 in which the wrote on the Estimate (Guaranteed Not To Leak) I paid them with a check $650.00 before they started They were to start in two days and didn't until over a week. When I got home from work on a Friday, they were just finishing up. I was asked if I could get the remaining $650 in cash to pay the rest. I did just that for them. I got up on the roof to look it over and noticed that the house wrap was flapping outside the siding and there were pine needles up against the roof and wall which made me call them to ask the owner of JPS if they did the step flashing and he replied NO, because there was flashing there. I was furious and told him that, I paid you to do the step flashing and not that it was important, but also paid you to install siding. That it will leak when the winter comes. He told me it will not leak. I told him I want money back for him not following the estimate/contract. He tried to offer $100 back. I was very upset and said I want more then that back! You guys only put up a 2.0-2.5 square of siding and I took you and one other worker 7 hours and only used 1 tube of caulking. He offered $300 back or more siding work. Not even two weeks later my roof was leaking during a light rain. I called Mr. Stopko and told him of it. His response "No Way I can't believe it's leaking. I told him to come look at it and fix it. He played games with me for weeks. More like over a month and never once came to look at the leaking roof. I called Maddy Construction and paid them $1,330.00 and the leak was fixed. I ask Mr. Stopko to pay Maddy Const. the $1,330.00. His response was that's more then I charged you originally. I explained that they had to very carefully remove new siding now that you just put up and step flash, counter flash etc. I told him I will go to the Magistrates, and he said he will drag it out forever. Why you ask? Because his name is Joseph Brian Stopko, but he goes by J. Brian Stopko to hide his identity. In the Cambria County Courts he has over 15 Civil cases against him and over a dozen Criminal charges. this guy is a Professional Con-Artist. I threated him with Court again and the Better Business Bureau and set up a payment arrangement of $900 be returned to me by April 31, 2015. with payments of $150 on the 15th of each month. He broke the agreement several times and finally paid the $900.00 in July 2015.

They paint beautifully, don't cut corners, and their prices are reasonable. They show up on time, and are here everyday until its done. They don't rush but they don't waste time either.

Description of Work
They are painting 1 room at a time, and will eventually paint the exterior of my home. The price was for 1 large room that was damaged as well. spent. beautifully, don't cut corners, reasonable. show up on time, here everyday until its done. They don't rush but they don't waste either.