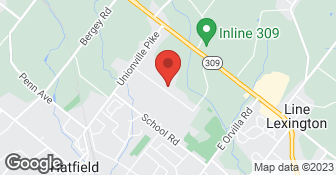 FREE 3D Design Consultation for Angie's List Members Call Now! For over 70 years, Anthony & Sylvan has been your trusted swimming pool builder. Our experienced design consultants understand the area’s climate and terrain and can help build the pool of your dreams or turn your backyard into the retreat that it once was. Whether it’s a natural rock waterfall, a hydrotherapy spa or free-form pool, we are so confident in the quality of our work that we offer the Anthony & Sylvan Lifetime Structural Warranty with each pool and spa we build. Arrange for a free, no-obligation consultation and estimate today. Don’t forget! Anthony & Sylvan can also help you maintain your beautiful oasis with regular pool service, or visit our retail store for all of your pool supply needs.  …

Great experience from start to finish and even after the fact with any concerns or maintenance. Very highly recommended!!

On time and on budget with top notch professionals. Blue Haven by Calvitti did an absolutely amazing job and exceeded our expectations for sure.

Stay far away from this company! They lie, nickel and dime, perform substandard work, and never return phone calls. We paid over $50,000 for a pool renovation and a year later the pool still leaked. Only after beginning legal action did the finally, sloppily fix the leak. 2 full seasons of adding water to the pool daily...

Vince was on time on his arrival to my house (hence the B grade in that category.). He was personable and friendly. He seemed to know his industry quite well. Blue Haven was the first pool company out to my home. At the time that I’m writing this review, I have still not received the proposal. I called Vince and was told that I would have the price at the end of the night (which has been one week since his initial visit. I was then told that he would give me the proposal only if I promised to meet with him in person after he gave it to me, I could smell the hard close coming. Well, it never got that far. After hearing that “no other pool contractor could do the work that he does” and how “everyone else sub-contracts their work”, I had about enough. I predicted to my wife that I would never received his quote. I have since hired another company and anticipate being very happy with their work. The shame is that Blue Haven started at the top of my list and quickly fell to the bottom. Oh, after almost three weeks, still no price was given to us. I just felt that their customer service stinks, especially when they should have put their best foot forward when trying to earn my business.

Description of Work
I had Blue Haven our for an estimate to have an inground pool installed in my backyard. They built a pool for my Aunt & Uncle, so they were high on my list.

Construction on the pool started in June of 2016. We requests a salt water pool at first, but a chlorine pool with UV and Ozone was recommended. We also made it VERY clear that we had well water and so could not fill the pool. We were told that wouldn't be a problem and that they could bring water in. There was no construction manager overseeing the project, which we were told there would be. And the trouble started when they started the cement work. They didn't bring water and ran our well dry. They apologized and assured us this wouldn't happen again. It did... They hadn't organized for water to brought in for plastering and ran the well dry when they tried to start filling the pool. Had to spend $1800 on an emergency water order. The response from the builder was. "We never told you it was free" Next issue was a pool leak. I was losing 500 gallons per day. After more than a week of them not showing up or sending the wrong person. I found the leak myself. They finally sent somebody to repair the leak which was with an underground pipe that had cracked. They installed the Ozone equipment based on an old installation method that the manufacturer recommended not doing anymore. They argued with me constantly and finally corrected that earlier this year. (Almost a year after installation) They forgot to install the deep heat circulation system claiming that it wasn't on the plans, which it wasn't, but it was on the contract that we signed. They forgot to install the inline chlorinator too.... That was installed months after the pool was in operation. They had electrical work and plumbing work completed prior to rough grading which meant that during excavation for the patio area, both plumbing lines and electrical lines were found to be in the way and had to be relocated. Zero communication throughout the project. I would ask when the next step was happening and if they responded, the day they told me would always come and go without any notification. Finally, I should never have been sold a chlorine setup like the one they sold me. (I probably should have done more research, but I trusted them). If you use chlorine tablets, the Cyanuric Acid builds up in the pool. This means you need to add more Chlorine than normal. They only way to remove Cyanuric Acid is to drain the pool (Typically half of it) and refill it. Not a problem if you have city water, but not good for people with a well. The recommendation for people with well water is Salt Water or liquid chlorine...... Overall, I love my pool, but the process with my experience with Blue Haven was not a good one. I would not recommend Blue Haven to anyone based on my experience. .

We hired Blue Haven Pools for a pool renovation. If we could take back the day that we signed the initial contract and paid the required deposit, we would. Phone calls go unreturned, not showing up to do a scheduled particular project on our pool occurred without even a phone call to let us know they weren't coming, sub-contractors who did sloppy tile work (and we are still trying to clean their mess), a "salesperson" who when asked a question about delays told us that we need to call the office not him. That's customer service?? When we finally were able to speak to the contact person at Blue Haven he would tell us there are so many people ahead of us. Too bad they weren't smart enough to not take in as many contracts before they had the manpower to do the projects. At one point we had a "sloppy" contractor come back to our home and try to get money from us. He claimed that he was not paid what he was due from Blue Haven. Shame on Blue Haven for hiring unprofessional subcontractors. IF YOU WANT TO BEG BLUE HAVEN EVERY STEP OF THE WAY FOR EVERYTHING YOU HAVE ALREADY PAID FOR then call them. Be smart and don't. Save yourself undue stress and aggravation.

Absolutely terrible. Never hire this team. They sub contact everything and take no part in supervision. I had multiple disputes about pricing and timing. Absolutely no project management despite me asking multiple times for a plan. I had terrible experiences with Ray the owner, Jeff the operations manager, Jack the salesperson and Lynn the scheduler. They try to hide behind the contract until they are in breach. I have never dealt with such an unprofessional company. They installed the wron color tile and paving.

Description of Work
They were contracted to renovate our pool

When you embark on a major construction project it is in your best interest to hire the most knowledgeable and experienced builder available. I made the right decision by hiring Blue Haven Pools by Calvitti for my custom in-ground pool. Every aspect of the process was clearly communicated and executed professionally. Once the design and permit process was complete, the various phases of construction were completed by skilled craftsmen resulting in a beautiful final product that will provide enjoyment for our family and friends for years to come. The company staff and on-site supervisors were engaged and guided us through the entire process, educating us about pools along the way. This organization is highly recommended.

Description of Work
The existing liner pool had reached the end of its useful life. After conversations and meetings with several established in-ground pool builders in the area, it became clear that Blue Haven Pools by Calvitti was the only choice.

Blue Haven Pools by Calvitti installed an in-ground gunite swimming pool at my residence in Berwyn, Pennsylvania in 2011. It was a comprehensive project that was coordinated in conjunction with a large home addition. The pool project turned out great and transformed my entire backyard. My wife, kids, and even our dogs love the pool! Blue Haven Pools by Calvitti installed a beautiful 1,250 sq. ft. pool with travertine coping, decking, and a 60 sq. ft. elevated spa with glass tile. The pool also has a large sun-shelf for our lounge chairs and several led laminar fountains, led bubblers, and a raised bond beam with stone facing and sheer descent waterfall. At night time the LED lights and water features are really impressive and reflect off of the Water Blue Beadcrete pool finish. They also coordinated the installation of a stone fireplace, cooking station with granite countertops, and expansive brown stone patio with stone sitting walls. The pool was complimented by an extensive landscape and low voltage lighting package. I would highly recommend Blue Haven Pools by Calvitti for those who want a swimming pool company that delivers a superior product and unparalleled customer service.