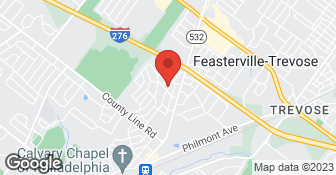 I wanted an estimate on adding a powder room on the first floor. They called and asked what I needed done. Then told me that it would cost me $10k plus. If I want a walk-in shower, that would be $15k. Sight of the project un-seen. I told them that I was sorry to waste their time.

Nicolai, Bogdon and team had this job completed in 4 1/2 days! They arrived every day at the time promised and worked straight through. They helped me with some suggestions for things I hadn't thought about which really improved the look of the bath. They had me come in to measure various heights so they would be convenient. Since they were able to start my job earlier than originally anticipated, I needed to quickly select the items needed so they could get them, so make sure that you have an idea of what you want ahead of time. The area was cleaned up before they left. I have been sharing their information with everyone who asks. And most of all, they are all so nice, and patient!

Thank you verry much for The nice reviw we Realty apreciate your bussines
5.0

Extremely professional. Arrived on time and began working right away. Asked questions about what we wanted and let us know what they were doing throughout the process. This was the best experience I have ever had with a home improvement project. The bathroom is beautiful! They actually finished early. Highly recommended!

These guys did an amazing job. They totally underpromised and over delivered too, finishing early on what I thought was an aggressive schedule to begin with. I literally found them through Angie’s List on a Monday, signed a contract on Tuesday, they started work on the following Monday and were done by Thursday. They replaced the entire bathroom in that time: double vanity, cast iron tub, tile surround, toilet, new fan, new lighting and vinyl plank flooring. They left the hall spotless every day when they were done, and everything was perfect when they were finished.

Thank you for your review
5.0

We just had our hall and master bathrooms remodeled by Good Deal Remodeling and we are happy with the end result. Our hall shower was leaking through the ceiling into our dining room, so repairs needed to be made. Instead of just fixing one small section of an old bathroom, we decided it was time for a complete overhaul. We purchased most of the items we wanted installed, including a vanity, countertop/sink, medicine cabinet, towel bars, and lighting. Good Deal purchased the tile & grout we chose at Floor & Décor, paint colors we chose at Lowe’s and the tub & toilet they recommended. Our hall bathroom was gutted, the pipes were replaced, and the subfloor was partially replaced because it was damaged in some areas from the leak. They installed everything and made the bathroom look great. While two of them were finishing the hall bath one other on the crew began demoing the master bath, where they also had to replace some rotten subfloor due to a leak that apparently happen years before we owned the house. They spackled & painted sections of the walls in adjoining rooms were nail heads pushed through during demo and they spackled and painted the dining room ceiling, which was part of the work order. They were very professional from beginning to end, they were on time, completed the project in the 10 days they estimated, and we felt at ease having the guys in our home. Before they began demo on the first day, they covered our furniture with plastic and helped take some photos off the walls. They cleaned and swept up at the end of each day, disposed of the trash, and added cardboard to our recycling on trash day. A few things to note: these guys are not designers, when we said we didn’t want shades of gray, subway tile, and shaker style cabinets like everyone else, they recommended we spend time researching materials/fixtures/colors and choosing/purchasing what we wanted. Also, we had to clean up silicone where it was accidentally smeared on the floor tile and touch up a few spots on the walls where the paint coverage was light, but overall they did a nice job. We would recommend them for future projects. Thanks guys (Bogdan, Nick, Javier, and Robert) for a great job!!

My husband and I had been through two major remodeling projects before dealing with Good Deal. The previous two projects were literally nightmares where several teams of contractors came and went for various reasons, none of which were good. From court settlements to disappearing acts to constantly being put on hold or asking for more money to complete the same job we had seen it all. Needless to say, we were skeptical when Good Deal came in with such a competitive price and an absolutely unbelievable timeline. We collected 4 quotes from well-reviewed contractors we found online and figured if Good Deal even came close to the proposed time and budget, they would be the best choice by far. They were also able to start our job right away which was just icing on the cake. Bogdan and Nicolae did not come close to the promises they made as we had hoped, they exceeded them! They completed a full kitchen remodel, 2.5 baths, additional flooring, some limited painting, and laundry room upgrades in less than two weeks. I thought there was no way they would finish in 2 weeks but they finished with one day to spare. We paid a little extra to upgrade some finishes including backsplash, faucets, and a few other higher things but the price they quoted us was the price they charged. My only advice to any potential customer is to be ready with all of your design finishes, details, and upgrades because these guys are no nonsense and you may risk slowing the project down if you aren't sure about any details you are particular about in advance. If we or any of our friends or family have remodeling needs in the future these will be the first guys we suggest.

Thank you very much FOR your review
5.0

Good Deal Remodeling finished our project in three days. They gave us exactly what we wanted. Our little bathroom never looked so good.

They were able to replace my ole bathroom in 3 days. When I had a problem with the noise level of the exhaust fan they came out and replaced it.

We had Good Deal Remodeling complete a remodeling in our small master bathroom. Bogdan, Nicholai, and their team were great to work with. They were quick to provide responses for our initial quotes, and then the final pricing. They finished the job much faster than expected, and they were able to work around some delays that we had in receiving some of our materials that we had ordered on our own. The final job was spectacular, and we are enjoying our upgraded bathroom. We would highly recommend their team to anyone looking to remodel their home.

Good Deal Remodeling exceeded our expectations with our bathroom remodel. We have a smaller bathroom and needed all new piping, drains and complete remodel of the bathroom from the faucet to a brand new tub/shower. When we meet with the remodeling team they sat us down, priced out everything and gave us multiple options from cheapest to most expensive, however, they let my husband and I decide everything! They also projected to get done in 6 days and got done in 3 days! It was a pleasure to work with them, we are so pleased to have found an honest, hard working team that we will be using for years to come! We highly recommend the Good Deal Remodeling team for any renovations you need in your home! You will not be disappointed.

Good Deal Remodeling is currently rated 5 overall out of 5.

No, Good Deal Remodeling does not offer a senior discount.