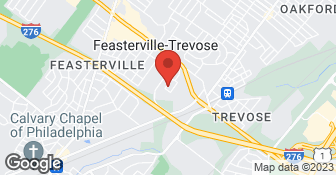 Moving and Storage in tri-state area...

These guys were awesome. Showed up on time, very professional, moved everything quickly. Cannot recommend them more. Pricing was fair as well. Also they will junk stuff you don't want to take with you to your new house.

Description of Work
House to apartment move, about 10 miles.

Really good service. Final amount was consistent with the estimate I received in advance. The cost was very fair. Movers were friendly and professional. Moved an upright piano among other things, which arrived at the new home in good condition. The guys even went so far as to move furniture from one room to the next to get it right AND made sure to felt pads were underneath furniture legs so the wood floors wound not be scratched. I definitely would recommend.

Description of Work
Moving services from one house to another. They were awesome. The entire crew was extremely helpful, friendly and professional in every way. Jim Broderick was awesome in coordinating the crew. Even though raining all day the crew was efficient, careful and such great attitudes in wanting to help out and ensuring everything was perfect. Would highly, highly recommend.

Broderick is a family business and I would definitely recommend them as far as a local mover. Our move went very well - nothing was damaged or broken. I suggest you hire an odd number of workers since we hired 4 movers which means you have 3 guys carrying out everything while one loads the truck - the guys were better in teams of 2 so 5 guys may have been better. Our move was on a hot day and the men worked at a constant pace - however they soon realized they would not get done - Mr. Broderick sent for reinforcements and again since they are local - two more guys arrived around 1 pm. to help out. We appreciated the fact that the men spent extra time when we arrived at our new home placing things exactly where we wanted and some times moving them multiple times, this is critical. Our greatest challenge on selecting a mover was figuring out how to compare the companies - the quotes were all over the place however we decided that we would compare the hourly rates and figure the move would take 10-12 hours. In addition Broderick told us that the movers that run over budget are where people have not finished packing and are packing while they are moving out of he house. We also found on Craig's list free moving boxes - we got all of the boxes from someone who had just moved from Florida and this worked great! Broderick charged us exactly what they quoted and it was very fair. They forgot one piece in our back yard and they went back and brought it the following afternoon. I strongly recommend Broderick they were trust worthy and efficient. Thanks

I contacted Broderick Moving & Storage for an estimate of costs and after a walk through of our house Jason quoted an estimate for the move and it was scheduled for 7/17/15. On the morning of the move three young men, Dave, Matt and Jim arrived promptly at the set time. They briefly surveyed the rooms and contents of the house and then proceeded to literally run for the next several hours; emptying the house and loading the movers truck. They disassembled certain large furniture and finessed other pieces through the doorways and or window. Carrying furniture and very heavy boxes up a long walk to the truck. Once the truck was loaded they proceeded to the new house where they were joined by another crew of three additional Broderick men who assisted in emptying the truck and placing the furniture. During this time Dave, Matt and Jim also reassembled the furniture exactly as it originally was. I was very impressed with the company and the leadership of Dave and the strength, courtesy, and professionalism of all of these young men. I am very pleased that we contracted with Broderick and would not hesitate to employ them again or to refer them to other potential customers.

Description of Work
They arrived right at the agreed time. 3 young men who worked tireless for 11.5 hrs. Everything handled carefully and nothing broken. Absolutely fantastic service!!!!

Description of Work
Moved furniture to an empty apt in a retirement community and came back one week later to move it across the hall to our new apartment.

They were very careful, fast, and responsive to any requests.Two men, a large truck, and they disassembled and reassembled the bed, packed up loose items, and placed furniture where requested.

Description of Work
Moved contents of 3 rooms from Philadelphia to New Jersey.

They were very good and thorough!

Description of Work
I used them to move my home.

The price was reasonable. They sent 3 movers out to do the job. They were good and they put things in the apartment where I wanted them at and there were no qualms about doing extra work.

Description of Work
They moved me from my old house to my apartment.

I had a great experience with Broderick. I booked them on relatively short notice (1 week or so) to unload furniture from a PODS container we were having delivered. The guys showed up right on time, were friendly, professional and fast, and were very careful with all of our things. They even assembled some of the furniture that had been taken apart, without my having to ask them to. I'm recommending them to my friends and would absolutely use them again.

Broderick arrived right on time with 5 guys to load our 2 story 4 bedroom house. They all did their assigned jobs as professionals . They were pleasant even thought it was a very difficult job moving everything . After 4 hours of loading they took a 3 hour drive to another state and spent the next 3 hours unloading.nothing was lost or damaged. Great company and crew.Would use them again.

Description of Work
mOVED OUT PF STATE Moved out of state

They were pretty good actually. They were honest guys who were pretty quick and got it all done very well. It was snowing about 4 inches but they still came and did the work. We got moved in so it was great. They were very helpful.

Description of Work
I used Broderick Moving & Storage to move my house.

They were the best. Mr. Broderick is a man of his word. - John Bell

Description of Work
Moved all our furniture (entire 3600 sq ft house to a new house.

Don't think you're going to move more than you can by yourself because everyone does that. DO be prepared and have boxes that are similiarly sized and clearly marked as to where they go. Don't skrimp on packing materials. DO get an estimate.

Description of Work
As a Realtor, I have to be careful with whom I refer because it's always my fault if something doesn't work out. I have referred this company 4 to 5 dozen times over the past few years and all of my clients have been thrilled with both the service and the price. His workers are the same guys he's worked with for years, his estimates are spot on and they treat your home like it's their own.

Additional phone - (856) 848-4854. We are a licensed and insured New Jersey moving company. Whether you are moving your entire household, a few items, your office or just a piano, Steedle’s can help move it all. Steedle Moving has been family owned and operated since 1918 and is one of the oldest and most reputable moving companies in New Jersey. We offer professional, dependable, and reliable moving services. We take great care when handling your goods, because we understand that your belongings are important to you and you are important to us.  …

BR Moving is a fully licensed and insured moving company. We operate in and around the Philadelphia region. We employ a small, dedicated staff of employees in order to provide you with the best experience possible. We bill by the hour, with a two hour minimum charge. All time after two hours is pro-rated in quarter hour increments. Payment is due upon completion of the work. We accept cash or credit.  …

With years of professional moving experience, Competitive Relocation Services is your local and long distance moving expert! At Competitive Relocation Services, we understand moving is not an easy task to accomplish, so putting an experienced moving company to work for you is our priority. Whether local moving or long distance moving, we are highly experienced movers that will help plan and pack your move. From the beginning, our Moving Specialists take the time to know you and your moving needs, making you feel that your big day is in the right hands. We more more than just "Moving Experience", we have patience. We know moving is not an easy transition for our customers, so we are equipped to help in every way we can.  …

Bonded
Insured
All statements concerning insurance, licenses, and bonds are informational only, and are self-reported. Since insurance, licenses and bonds can expire and can be cancelled, homeowners should always check such information for themselves.To find more licensing information for your state, visit our Find Licensing Requirements page.
General Information
Free Estimates
Yes
Eco-Friendly Accreditations
No
Payment Options
Check
Senior Discount
10%
Warranties
Ask for details

Moving and Storage Packing and Unpacking

Broderick Moving & Storage is currently rated 5 overall out of 5.

No, Broderick Moving & Storage does not offer eco-friendly accreditations.

No, Broderick Moving & Storage does not offer a senior discount.

No, Broderick Moving & Storage does not offer warranties.