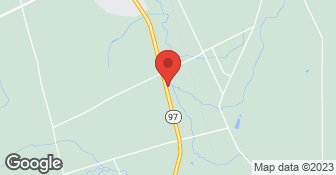 I can't say enough about the professionalism, efficiency and workmanship of Jim and his crew. I would recommend American Heated Gutter Systems to anyone, without hesitation!

Description of Work
heated gutter over back door

Description of Work
We had the front gutter (40 feet) and a portion of the back gutter (7 feet) replaced with the leaf and heated hood gutter system.

we are sorry you feel this way. i believe this customer is very wrong and i will say so we have thousands of systems in this area and gave you many customers in your neighbor hood to check out. you signed our contract and we installed it in one day. we have never received any phone calls for repairs or complaints. customer like this have buyer remorse when they received a great product in a timely fashion and works as is sold to them. our prices are not based on footage as was told to them. all of our men have our name on there shirts, coats, hoodies, and we have no trucks that are not lettered? this is the first we have ever heard of there dislike and have called them many times and no calls back. Suzanne Owner
3.0

Description of Work
I asked for references which they promised to provide. Still waiting

We called [Member name removed] and left message on voicemail with 3 referrals. Called to follow up and only got voicemail again. Requested a call back and still waiting
3.0

They seem to have a really terrific product, but the estimate was outrageous! When asked for an estimate with several options (what I had asked for originally) I received the same estimate (no options) with a slightly lower price.

Description of Work
Estimate only.

We had a great experience with this company. Upon moving into our home one of the first things we elected to repair was the gutter system. we had quotes from several companies, and although American was slightly more expensive, I feel like they sold a superior product. The gutters are wider and have more capacity than our previous gutters, and we have not had any problems with clogging. The gentleman who came out for initial measurements and quotes was punctual and professional. The work crews were likewise very professional. When they discovered rotted fascia they presented me with several options, and worked quickly to find a matching (wood and color) material. The new gutters look fantastic and work well. Very happy with this company and would recommend them without hesitation.

We are your one stop shop for all your lawn care and landscaping needs. We have over 15+ years experience. Give us a call today for your FREE Quote! ...and Remember "OUR GRASS IS ALWAYS GREENER"  …

We do not clean gutters or do repairs on our competitors gutters.

No, American Heated Gutter Systems, Inc does not offer a senior discount.

Are there any services American Heated Gutter Systems, Inc does not offer?

We do not clean gutters or do repairs on our competitors gutters.