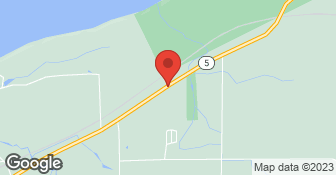 Scott heher of bradrew custom woodworks was hired toreplace an exciting wood deck and said he would take care of the buildingpermits, 1st he showed up in a car with no help after saying he had trucksand a crew after a few days he was still on his own no crew he had thelumber delivered and some I ended up using my truck and trailer to pick up,he started borrowing tools and machines from me then I get a visit from thecity inspector that scott heher never applied for thebuilding permit and after confronting him about it said he only did thecounty I asked to see it along with the building plans I paid for and hekept making excuses after he had already received $6500.00 we haven't seenhim again, we do have a contract signed by Scott Heher himself and signedreceipts as well. He never finished the deck and what work he managed to dois very bad carpentry so I'll have to have someone else come re-do it orjust do it myself.The deck is a 36'x20' with two sets of stairs..Scott heher is the sole owner and operator of bradrew custom woodworks outof east Springfield PA , I have turned him into the BBB, Angie's list alongwith a few other places and just want to get the word out there so as towarn others. He has been dodging the building inspectors calling him plushe has sent the court summons back like he doesn't live there anymore. Ialso cought Mr heher smoking a substance from a glass pipe in my drivewaywhen he thought I wasn't home.I confronted him about it and he tried to say it wasn't smoke at first thensaid it was vaping now I grew up in the 70s ands 80s and know what it washe had and know the smell of weed. I should have done my research betterbefore hiring Mr scott Heher but after listening to his sob storey I fellfor it . Please beware look him up on other sites see that the only peopleleaving any feedback is his girlfriend and aunt don't fall for his lies andhe has no real carpentry skills.

Description of Work
Mr Scott heher did not use enough concrete in the footers for the deck he also did not properly attach the deck to the house one set of stairs collapsed deck boards are coming up from the floor and he basically never finished the job after getting paid and what he did do was horrible craftsmanship and very unsafe as the building inspectors said himself.

DBC Remodeling helps clients remodel their houses into homes where they love to live. Operating in Erie, PA and northwest Pennsylvania since 2007, we are a residential remodeling contractor specializing in sunroom additions, kitchen and bath remodels, decks, awnings, basement waterproofing and basement finishing.  …

Shifting to exterior projects--Although we are following all the CDC guidelines, we have found that some clients might be uneasy with us being inside their homes. To weather this storm, we are moving more of our focus to our exterior projects including pressure washing and painting services. Here at Berry Painting & Home Improvement , we take pride in providing the best services and satisfying our customer needs. We specialize in exterior painting, interior painting, drywall repair, and much more. We offer no money down and look forward to your business and serving you. Contact us today 7165783475  …

AU Remodeling is a newer and young company that is determined to provide a new GOLD standard to remodeling. We hope to provide customers with perfect services that will leave one impressed. We guarantee your satisfaction and we won’t leave until the job is done right. We pride ourselves on the quality work we provide, while delivering great customer service! Check out our services offered and call or click to schedule a free estimate today.  …

Insured
All statements concerning insurance, licenses, and bonds are informational only, and are self-reported. Since insurance, licenses and bonds can expire and can be cancelled, homeowners should always check such information for themselves.To find more licensing information for your state, visit our Find Licensing Requirements page.
General Information
Free Estimates
Yes
Eco-Friendly Accreditations
No
Payment Options
Check
Warranties
Ask for details

We offer a wide range of services all geared towards remodeling and home maintenance (both interior and exterior). From framing to painting we have any project covered.

Bradrew Custom Woodworks is currently rated 1 overall out of 5.

No, Bradrew Custom Woodworks does not offer eco-friendly accreditations.

No, Bradrew Custom Woodworks does not offer warranties.

Bradrew Custom Woodworks offers the following services: We offer a wide range of services all geared towards remodeling and home maintenance (both interior and exterior). From framing to painting we have any project covered.