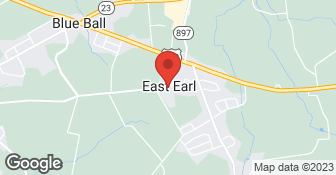 Smucker Brothers Construction is a family owned and operated business started in July of 2011. We have many years of construction experience and pride ourselves on our custom, high-quality work. We specialize in custom home design, additions and remodeling, vinyl decks, custom garages, and anything else you need! We pay close attention to the little details and finishing touches that turn an ordinary project into something extraordinary. We are fully insured and offer free estimates on all of our jobs....

Description of Work
They never got back to us. Very disappointing as they did nice work got us in the past. Kind of sad they just blew us off. | | |

We apologize for any mistake on our part in not getting back to you,
5.0

We recently hired Smucker Brothers Construction Company of 1330 Sherp Hill Road, East Earl PA 17519 for two major house projects: 1. To replace our exterior siding 2. To design and build a large second-story maintenance-free deck We could not be happier with the results. Additionally, the whole experience in working with the three brothers and their team of builders was a total pleasure. Before the project began, we met with one of the brothers, Mike Smucker, to plan the project. We discussed the design and reviewed product samples and colors with him to ensure that we would be happy with the outcome. Once all of the decisions had been made, they began the work, by mutual agreement, while we were away on vacation in August. We were amazed and delighted at how quickly they worked. When we got back within a couple of days of the start-up of the project, the original siding had been completely removed and the ?Tyvek? insulation, as well as a large section of the new siding, had already been installed. They completed the siding project in little more than a week - including having to build a wall, replace an exterior window, and move another window from its original spot. We?ve had many compliments on the wonderful results. At the end of each workday, the guys cleaned up all of the debris so that there wasn?t any unsightly mess left behind and, each day, they removed the trash from the premises in their truck so there was no need for us to rent a dumpster. As part of the project, we wanted to replace our original wood shutters but didn?t want to use a standard aluminum or vinyl replacement. So, one of the brothers, Alvin, built us shutters to our specifications out of a maintenance-free product called Azek. The shutters are sturdy and attractive and will last for as long as the house is standing. Once the siding project was completed, they began work on the deck. Within a few days, it started to take shape. Because the deck is not at ground level but is 10 feet above ground, it had to be constructed on ?stilts? which was no small feat. The foundational supports were quickly installed and two sets of stairwells were built along with two platform levels. A large bay window had to be removed and replaced by a sliding glass door opening onto the lower platform. In the midst of all of this construction, we realized that we wanted to replace our front & back doors as well as our lamppost. These tasks were added to the original work order and the guys did an excellent job on all of it. The deck is absolutely first-rate ? beautiful in design, spacious in size, and exceptional in quality. Our next-door neighbors, who have a beautiful deck of their own, teasingly told us that they?re experiencing ?deck envy? at seeing ours. We were thrilled, throughout the whole process, with the responsiveness of Mike and his brothers, as well as the kindness, professionalism, and skill of the whole team of guys. Each of the men bent over backwards to make sure that we were happy in every way. We are exceptionally happy with the results of these two projects. There isn?t a single thing that we would change. We would highly recommend that anyone use the services of Smucker Brothers Construction. We can be certain that, because of the professionalism and expertise of this outstanding company and its top-notch team of people, anyone who decides to utilize them will be equally delighted with the whole experience and the final results.

Description of Work
Smucker Brothers Construction did two major projects for us: 1) replaced our exterior siding and 2) built a large second-story deck with maintenance-free materials.

Wonderful experience! Pricing was very competitive, workers were professonial, and also punctual. At the end of each day , everything was cleaned up and left the way they found it. We highly recommend this company. We are so pleased that we are having them do our bathroom rennovation.

Description of Work
We needed a new roof on our home. This would only be our our second roof in 29yrs. Smucker Bros. did not just put the new roof over the old. Instead they took off the old and put the new on. We love it !! We also had the chimney restuccoed. I never realized how bad it looked before!!

Most people get frustrated when trying to communicate with a contractor. At Joyland Roofing, we set a new standard for roofers by corresponding quickly and often from start to finish. You’ll be provided with a clear roof analysis and estimate so you’re confident in our solution. Residential & Commercial roof replacements & repairs. Shingles, metal, rubber. Skylights, sun tunnels, gutters, solar panels. Serving Lancaster, Dauphin, Lebanon, Berks, York, Chester, Cumberland, and Montgomery Counties. We are certified by leading roof material manufacturers: GAF MasterElite, MuleHide, and Roofing Products International. We can offer industry-leading warranties and guarantees, & your roof will be installed using manufacturer recommended practices!  …

At Hackman SmartRoof, we've dedicated our business to helping you and other homeowners understand roofing and roof repairs. Our mission is providing safety, security, and comfort to our clients through world-class customer service. The Hackman team has been serving the Susquehanna Valley area for all their Residential Roofing Replacement and Repair needs. We also offer Siding Installation, Windows, and Shutters.  …

Insured
All statements concerning insurance, licenses, and bonds are informational only, and are self-reported. Since insurance, licenses and bonds can expire and can be cancelled, homeowners should always check such information for themselves.To find more licensing information for your state, visit our Find Licensing Requirements page.
General Information
Free Estimates
Yes
Eco-Friendly Accreditations
No
Payment Options
Check
Senior Discount
No
Warranties
No

Smucker Brothers Construction LLC is currently rated 4.8 overall out of 5.

No, Smucker Brothers Construction LLC does not offer eco-friendly accreditations.

No, Smucker Brothers Construction LLC does not offer a senior discount.

No, Smucker Brothers Construction LLC does not offer warranties.