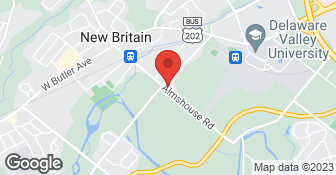 Business owner and two sons Payment due at time of service in cash or check...

Description of Work
I've had them for all my plumbing needs . . . sump pumps, hot water heaters, hose bibs, replacing faucets. They're a family business and they're as honest and reliable as you want them to be. I've referred them to many people and all have been very happy.

They are awesome. They are great and prompt. It's a family business. I always see the same family member. They are very professional. Their price is right. Their work is great. I don't call anybody, but them. Their responsiveness sticks out to me. I use them over 8-9 times a year.

Description of Work
I hired Senior Neil Plumbing & Heating as there was some fault with the valve in my shower.

I have used this plumber in the past for the same problem. This time I called him in the morning and he said that he would get to us in the late afternoon on his way home as we only live about 5 mins. from his home. He showed up at about 3 p.m. with his son and I explained that the sink was blocked and that I had used 2 different products that I purchased at the supermarket to unclog sink, I also plunged the sink and so did my husband, but it was still blocked. He got his son to get a plunger from his truck and he plunged the sink once and the blockage was gone, I could not believe that it was fixed, I do believe that if I had waited another day, the products that I purchased and used in the sink would have solved the problem. When I asked him if it was fixed he laughed with his son and said that they were"professional plungers". He then said that he was going to write me up a bill, at this point he had been in the house for 20 minutes, he returned with a bill for $85, although this bill was not expensive I was annoyed that he charged me so much as I feel that I solved the problem not him, and that I was on his way home, as a prior customer he could have given me a break on the price as all he did was walk in and plunge once and it was fixed. I think $85 is excessive for 20 mins. I will not use him again.

Unique Indoor Comfort is a fourth-generation heating and air-conditioning company that employs a whole-house approach to indoor comfort integrating the heating, air conditioning, and geothermal systems with the home envelope and delivery systems. Our reputation for superior service and quality craftsmanship has been constructed from decades of treating customers on their terms in providing service with solutions.  …

Insured
All statements concerning insurance, licenses, and bonds are informational only, and are self-reported. Since insurance, licenses and bonds can expire and can be cancelled, homeowners should always check such information for themselves.To find more licensing information for your state, visit our Find Licensing Requirements page.
General Information
Free Estimates
Yes
Eco-Friendly Accreditations
No
Payment Options
Check
Senior Discount
15%
Warranties
Ask for details

Senior Neil Plumbing & Heating is currently rated 3.7 overall out of 5.

No, Senior Neil Plumbing & Heating does not offer eco-friendly accreditations.

No, Senior Neil Plumbing & Heating does not offer a senior discount.

No, Senior Neil Plumbing & Heating does not offer warranties.

Are there any services Senior Neil Plumbing & Heating does not offer?