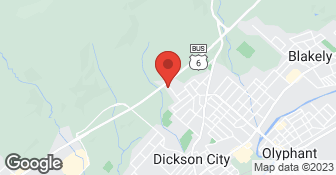 We have used TandH for several flooring jobs in the past two years. I have found them to be excellent. It is a small business and the owner often makes the initial call himself for the estimate. He is friendly and professional. The job was always completed in a timely manner.

Description of Work
Installation of carpet and bound an area rug.

My wife and I were looking for some place that could offer quality work for an affordable price. We went to several places and found that their price was not within our budget or they did not have what we were looking for as far as materials went. A family friend recommended T & H, so we went there to see what was what. They had everything we wanted. The sales staff, which included the owner, were professional, courteous and helpful. When we found exactly what we were looking for, they asked for our budget. I told them to give me a price and then I would let them know what the budget was. They gave me a general price of $1900.00 and said they could give an actual price once they measured. They never asked for my budget again. We scheduled and appointment for the measurements in 2 days. They showed up exactly what time they said they would. They called me within the hour with a final price of $1800.00. At this point, I offered that our budget was actually at $2000.00 and that i was very pleased...so far. An appointment was scheduled for 2 weeks due to the fact they had to order in the kitchen flooring. They called one week later and asked if we wanted to set up a sooner time or keep the same date since the flooring came in already. We set it up for the next day. To save money, I took up the old kitchen flooring on my own since the old flooring was only self stick tile. They showed up the next day on time and had the kitchen done by lunch time, including all of the floor molding!! After lunch they began pulling up the rug. After pulling it, they found a big hole in the floor do to old termite damage we didn't know about when we bought the home 12 years ago. So instead of stopping and waiting for us to have it fixed, they called a local contractor (who I also knew), and asked him to come take a look at it. He was there within 20 minutes, repaired not only the floor, bit also shored up the joists and charged me $50.00 plus materials for a total of $81.00. After the contractor finished, T & H was done by 5:00 pm. they did great work and saved me a bundle of money on other work that I probably would have had to spend a lot more money on. I would definitely recommend them to anyone.

Description of Work
They put new flooring in our 13X19 kitchen and new carpet in our 16X24 living room.

***We specialize in Hardwood Flooring Sales & Installation.****We do not offer Hardwood Refinishing services at this time**Kingston Flooring is a family owned local business backed with over 15 years of experience. We are committed to excellence in every aspect of our business. We uphold a standard of integrity bound by fairness, honesty, and personal responsibility. Our distinction is the quality of service we bring to our customers. Accurate knowledge of our trade combined with ability is what makes us true professionals. Above all, we are watchful of our customer’s interests, and make their concerns the basis of our business.  …

No, T & H Floor Store LLC does not offer a senior discount.

No, T & H Floor Store LLC does not offer warranties.