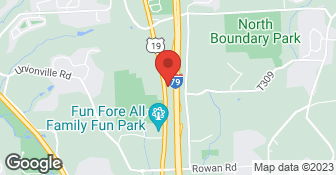 Conrad Kitchen Bath and Remodeling LLC has earned a reputation as a FULL SERVICE remodeling company providing quality design, products, installation and a personal touch. Count on us to guide you through the entire design and remodeling process of your bathroom or kitchen. Visit us at our new showroom - 20808 Rt 19 Suite A, Cranberry Twp., 16066...

I was totally pleased with the entire project. The workmen were exceptional.

The project went very well. Dale Conrad was very responsive. He called me back right away after I initially contacted him. We met several times, chose the materials and installation started started three weeks later. The entire project was completed in under 1-1/2 weeks. His team was friendly, professional and left the work area completely clean each day before leaving . I would definitely hire Conrad again and plan on hiring them for anticipated future bathroom renovations.

Quality of work was some of the best that I have ever received from a contractor among all of those who have worked in my home...ever. From beginning to end, everyone involved in the project proved their dedication to a quality job. There is NOTHING that I can look at and say "it could have been done better." Mark and Tyler were at my home promptly at 8 a.m. and were there until 5 p.m. everyday. They respected my home by laying down tarps over the areas where they would be walking, taking other measures to minimize dust, and cleaning up at the end of the day. They included me in the process, asking for my opinion before performing certain aspects of the job, and showing/telling me what they were doing. They also were open to my questions and ideas. I was not made to feel like I was bothering them or questioning their ability. They made the remodeling process as painless as possible. Dale, the owner, worked with us from the beginning on materials, design, and the estimate. We took quite a while to make a final decision on who to hire for the job. Dale continued to check in with me along the way, offer references, and answer any questions I might have. He was patient. It was also clear he was a pro and had a lot of experience doing what we needed to have done. He had great suggestions on materials, and he regularly checked-in on the project at our home. At least once a week. Our bathroom was completely gutted, and we rerouted plumbing for and moved just about everything. We even moved a vanity out of an adjacent hallway into the actual bathroom and made the area into a closet. Mark and Tyler worked tirelessly on sanding and staining the closet doors so they would match with our existing woodwork and look nice. They weren't happy with the way the doors turned out the first time, and re-sanded and re-stained until they were happy with the quality. The doors are amazing! I can't say enough about how great these guys are! There were a couple of little glitches along the way (toilet and knee-wall were installed in the wrong direction at first -- the change to the original drawing didn't make it onto the final -- and the shower glass was the wrong size and had to be re-ordered, adding a week of wait time), but with such a large project, things like that happen. It's how the problems are handled that makes the difference. Neither ended up being a big deal because Mark and Tyler fixed the toilet and knee wall the next day (and didn't act upset or put-out at all), and the problem with the shower glass was immediately reported to the glass company and to Dale. They called Dale before I could! I was thrilled with this level of professionalism and customer service. I would hire Conrad to do every project in my house in the future if they were willing and able to do them!

Mr. Conrad returned my call five days after I left a massage. He apologized, with the holidays coming he had jobs he had to finish up. I said I understood. I explained (on the phone) I would like to have my bathroom gutted and enlarged, knocking out a wall making the bedroom smaller. I also was thinking, of having my kitchen updated (counter top, back splash, and new floor). My cherry cabinets are still in excellent condition. Mr. Conrad stated quit abruptly "l will not come out to your house without a $500.00 deposit, for designing your new Maser bath." Excuse me, how do I know I want to hire you. When we have not met. Nor you have not looked at what I would like to have done. Sincerely, Dissatisfied r

Arrived on the scheduled day and completed the work as described in the proposal/contract. Very careful in covering all surfaces so as not to scratch/mar anything. Installed the glass subway tile on day one, then returned the next day to apply the grout and finish the tile work. The one worker then installed the 26 cabinet handles / hardware. Al handles etc were in perfect position on all cabinets and drawers.

Description of Work
Installed a beautiful subway glass tile backsplash in our new kitchen. They also installed new hardware on our cabinets. The workers completed the job in 2 days and cleaned up everything like they were never here except for the beautiful work.

They are the best from start to finish. Started 2 weeks late but the wait was worth it. Little pricey, but I guess in this case, you get what you pay for. Can't go wrong with this provider.

Description of Work
Complete remodel of kitchen and bathroom. Gutted rooms to the studs and started over. Custom designed both rooms.

We have had other companies provide work in our home but none of them compare to what we experienced with Conrad Kitchen and Bath. From our first meeting until the conclusion of the project the staff and crew provided us with professional expertise. The actual work crew demonstrated attention to detail that is not often found. We appreciated their respect for our home and their pride in providing us with an exceptional finished product. If you are looking for a company that is exceptional then look no further than Conrad Kitchen and Bath. You will be amazed and totally pleased with final product.

Description of Work
Our mastyer bathroom was totally remodeled. Walls were removed to provide additional space and the associated plumbing was redone. We were able to create a totally new space. Mr. Conrad designed the new bathroom and provided detailed plans regarding the entire project. We relied on Mr. Conrad's experience and designing skills regarding the reconstruction. He provided recommendations on all phases of the project. There were no additional costs related to the project. We appreciated the professionalism of Mr. Conrad and his crew. Nothing was left to chance and there were no surprises. We highly endorse Conrad Kitchen and Bath.

They did a good job and were professional.

Description of Work
They put in new gutters and downspouts.

Conrad Kitchen & Bath Remodeling did give us a quote, but we didn't wind up using him. He came out a couple months ago. He quoted us a little bit over our budget. But he did some excellent work in designing and showing us the outline he had. It wasn't within our budget. We both got the impression that he was very professional. It was pretty positive really. If it would have been within our means I'm sure we would of had him do it.

Description of Work
Conrad Kitchen & Bath Remodeling quoted us for remodeling a kitchen.

He was very punctual and professional. I also liked that his estimates were both accurate and reasonable.

Description of Work
He came to do some drywall work at the house I was moving out of.

We specialize in drywall and sheet rock installs, repairs, finishing, and more! We guarantee your satisfaction, and we won’t leave until the job is done right. We pride ourselves on the quality work we provide, while delivering great customer service! Check out all the services we offer below and call -or- click to schedule a free estimate today! We offer interior framing, drywall, and trim or mill work!  …

Licensed
Insured
All statements concerning insurance, licenses, and bonds are informational only, and are self-reported. Since insurance, licenses and bonds can expire and can be cancelled, homeowners should always check such information for themselves.To find more licensing information for your state, visit our Find Licensing Requirements page.
General Information
Free Estimates
No
Eco-Friendly Accreditations
Yes
Payment Options
Check
Warranties
No

No, CONRAD KITCHEN, BATH & REMODELING LLC does not offer warranties.

Are there any services CONRAD KITCHEN, BATH & REMODELING LLC does not offer?