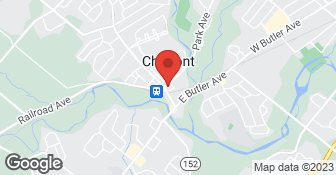 McG has been in business for more than 25years and is NCFI Certified. Our knowledge of the spray foam industry, attention to detail and dedication to his customers has proven to be a winning combination. They pride themselves in doing what they do best - the proficient application of spray foam. Their business has grown because of their dedication to service and attention to detail. Contractors and homeowners have realized the tremendous advantages of this insulation and want the best installers. Their goal is to keep the customer #1, by going that extra mile....

Three times I made an appointment, scheduling two hours of my day for them to come by. First two they called me late to cancel saying they were busy with a job. Third time they said they were at the house and knocked. I did not hear anything. They did try to call me, but left no message. The cell signal in this area is insufficient at times, and calls don't go through. But there was no message at all. I've moved on to another insulation company.

It went very well! Everyone was very professional, nice and let me know what they were doing every step of the way.

It was the best decision we made as far as hiring someone to do work my husband could not...they were professional, courteous and meticulous...they were very respectful of our home and did great work...what a difference upstairs...the heat no longer hits you in the face halfway up the steps...thank you

Description of Work
We had our crawl space/attack insulated

done at no extraThey arrived on time and completed the work in several hours. The workmanship was excellent and they provided great advise on correcting a few areas that were done by another contractor.

Thank you very much for your kind words. We are pleased to hear that the information we provided helped you despite the fact it may have contradicted any competitors. That means the world to us as we have been providing this service for 25 years.
5.0

Ben and another man came out according to schedule. They protected all the doors and windows from overspray. Using a long hose they reached the underside of the addition. When the spraying was done, they cleaned up thoroughly. The job was done in about 5 hours.

Description of Work
Spray foamed walls and under floor of addition. Also sprayed the rim joist around the perimeter of the basement.

Thank you for the review. Ben has inherited the company after his father passing and is still working hard to ensure great service along with two other family members. We hope that the job that was done is still treating you well and appreciate your feedback.
5.0

He was very nice and friendly. He was excellent and responded to my request to come on time. I found that very refreshing that he could have tried to do something but he didn’t. He was just so good to say that my situation was fine. He was very honest and he didn't charge for the service fee.

Description of Work
McGaughlin Spray Foam Insulation came to checked on my situation and he determined that I do not need the insulation.

We find that honesty is the best way to deal with anyone and try our best not to hike up prices or take advantage of the great community we serve. Even though we did not provide a service thank you for the review it means a lot to us.
5.0

Dick McGlaughlin arrived promptly as scheduled and explained the entire process before giving us an estimate. His crew started the work on the scheduled day and the project wrapped up two days later than expected. This extra time was spent to do the job properly since extra work was encountered as the job progressed. We were pleased that the project was completed correctly and there was no charge for the extra time required. All the technicians were polite and pleasant, cleaning up every day after working. Highly recommended.

Description of Work
Removed and disposed of all the old insulation in the attic. Closed off all exposed areas prior to shooting in 4 to 5 inches of expanding foam insulation.

How courteous and how professional. If I were doing an expansion and needed new insulation, I'd call them in a second.

Description of Work
I called this company to get an estimate on spraying foam insulation into existing walls of an older home. Turns out, they can only do work on open studs. Without my even asking, the receptionist recommended two other companies that might be able to help me. She also explained to me how the installation would work.

Thank you so much! At the time of this review the receptionist you where speaking about is one of our most experienced staff members with an unprecedented amount of knowledge. We are very thankful that she is a part of our team and will pass on your positive conversation with her.
5.0

The crew arrived in a timely manner, worked quickly and cleanly, and provided great advice for how to do the job. When I had questions, they were either able to answer immediately or called me back quickly with the information. I liked the work so much that I've recommended them to several of my friends for their insulation work.

Description of Work
McGlaughlin super-insulated a small addition we had constructed in 2006-07. As an energy efficiency specialist, I was quite specific in my needs and his crew worked with me to create an excellent, air-tight and efficient structure. They insulated walls, roof, and above the slab in such a way that the heating/cooling requirements in this section of the house is absolutely minimal.

Green Stone Energy LLC is a privately owned Company based in Southeastern Pennsylvania, servicing residential and commercial customers, in order to help improve their energy efficiency. Green Stone Energy LLC is committed to improving our customer's standard of living, by helping increase the energy efficiency of each home or building, thus helping lower yearly energy costs. We work closely with each customer to get the results they need, and strive for Total Customer Satisfaction.  …

Atticrawl is a family owned business with 10 years of experience in this field. We believe in serving our customers according to their needs. We specialize in attic and crawl space cleaning, rodent proofing, and insulating. All of our technicians and crew members are professionally trained/ or certified. We take pride in what we do, and we are committed to delivering outstanding customer service.  …

At Master Attic, our goal is to provide you with the highest quality materials and workmanship at an affordable price. We are a team of licensed, trained professionals with 15+ years of experience in insulation and rodent solutions. May it be rodent proofing, insulation removal, insulation installation, sanitizing, moisture barrier, radiant barrier, air duct repair replacement, or crawlspace cleaning, we have you covered. Do you hear noises in the attic? Smell something in the crawl space!? Schedule an appointment today, and have one of our technicians come out to assess the area and provide a free detailed estimate for the project.  …

No, MCGLAUGHLIN SPRAY FOAM INSULATION INC does not offer a senior discount.

No, MCGLAUGHLIN SPRAY FOAM INSULATION INC does not offer warranties.

Are there any services MCGLAUGHLIN SPRAY FOAM INSULATION INC does not offer?