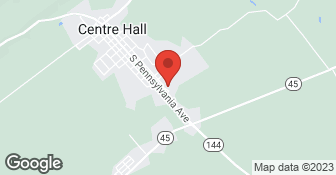 This is a family owned business since 1975. We do all our own in house installations. Free professional consulations, with one of our 3 designers, free estimates, and free state of the art computer designs. 6 cabinet lines, Manufacture and install our own countertops. Laminates by Wilsonart, Formica and Pionite. Solid Surfaces by CORIAN and Gibralter. Natural Granites and marbles along with Quartz products by Zodiaq, Cambria and Caesarstone....

Brad is a true professional with great technical skill and an eye for detail. He worked with us to design a new kitchen space that modified the existing 1960s era wood cabinets to accommodate new counter tops, a new sink and new modern appliances. Whereas others advised us to fully replace large sections of the cabinetry, Brad intuitively understood our desire to create a beautiful space without spending tens of thousands of dollars. I would highly recommend Shunk's Kitchens to anyone in the State College area.

After a number of years of daily wear and tear from a family of 6, our Corian countertops were dull and had scratches in a number of places. I called several potential kitchen counter contractors and most wanted to put me on the schedule for several weeks down the road. We had a big event coming up and were hoping to get our countertops resurfaced beforehand. Shunk's was able to give me a appointment just one week out. The day before the service, Shunk's called to reconfirm the appointment. They said they would start one hour later than previously planned, but would still finish the job within the agreed timeframe. The next day, Shunks arrived right on time. The crew was very friendly but they got right to work. They removed each section of countertop, took it outside to do the resurfacing (to keep dust from gettng all over our house) and then reinstalled each countertop. I was amazed that the crew was able to remove each countertop without creating any damage whatsoever to my walls/back splashes!! The final result was beautiful countertops that looked exactly like they did when they were initially installed 8 years ago!!! Shunk's is excellent. Highly recommend.

Description of Work
Easy process and fast work. We had great results, I'd recommend.

Description of Work
Had granite countertops installed and I am extremely happy with the results. After many different quotes, I found that Schunk's was not only the best price but also very professional and courteous. Matt was either on site or readily accessible by phone if there were any questions.

In Jan/Feb 2011 we renovated a large portion of our home, which included the kitchen. We replaced all of the old cabinets and counters and redesigned the entire layout lay-out of the kitchen. We now have an easy to use island, designed to comfortably seat 4 to 5 people. Shunk's representatives were really great to work with, listened to our needs and spent many hours helping to create a design, select the most appropriate stain and style of cabinet and placement of appliance which I and my family now really enjoy. In addition, they installed crown molding (same stain as the cabinets) in the kitchen and the connecting family room, effectively bringing the two areas together...it looks great. Because we were working with a general contractor at the time they also worked closely with his team on the placement of ceiling and sub-cabinet lighting. The new lighting brightens-up the entire room and effectively illuminates the working space on the counters. We have received many compliments during the past two years on what they did. I found the folks at Shunks' professionals with a great deal of experience and had a lot of great suggestions. They were very responsive to our needs and a pleasure to work with. The only down-size was the price. I felt that the overall price was a bit high, which prohibited me from having them renovate the pantry because they wanted an extra $2000 to $3000 to do it. It was simply, too expensive. The cabinet for the upstairs bathroom also looks great and I hope to purchase others after I am able to save up enough money to continue the renovations.

Description of Work
installed new cabinets, counter-top, crown-molding and sink in kitchen, plus a new cabinet for a bathroom

They came in and did the work. In a few days it was done. I don't recall the price. At the same time, my Mother passed away. We picked out something really quickly as we had to go away. We have never replaced anything. We have no complaints. A lot of the work was done, while we were away. We were also both working all day. They were professional and they did what we asked them to do.

Description of Work
I used Shunk Kitchen's about nine years ago. They put our kitchen in.

Shunk's performed all the work in a professional manner. The men who came to work were quiet and efficient, and neat!

Description of Work
We had a complete kitchen remodel. We replaced the floor, window and all appliances, plus the cabinets. We met with Matt from Shunks. He helped us focus on what we wanted in a kitchen. They have several lines of cabinets at different prices so there is something that can work for everyone. He prepared computer models of the kitchen and tweaked the model as we went along. To modernize the kitchen which was built in 1980s we removed the soffit and had cabinets that go all the way to the ceiling. Behind the soffit there were problems with the wiring that had to be resolved. The ceiling also had to be redone in a couple spots. Shunks did that. We selected granite for the countertop and Shunks told us where we could go to pick out just what we wanted. We are VERY happy with how it turned out and the experience we had with Shunks.

They were recommended by my neighbors. Pricewise I would say they are reasonable, but they did not measure or level the counter tops before. Then they brought in that big slab of granite and broke it because the counter tops were not level. The counter top guys didn't want to put it in and Shunk's told them to put it in anyway. They had to take all this granite out again and then it took a week, and all that week I was totally without a kitchen. They finally came, raised the counter tops, and leveled them. Then they put the new counter top in, which was okay. I just didn't like that I was without of a kitchen for a week, when it was supposed to be a 3 day job and it could have been prevented. If they would have done the leveling at first to begin with, or even when the counter top guy said that's its not level and it might break, and they just went ahead without leveling it. There was this big deal with the kitchen sink. They put this really nice counter top and then they put the cheapest glass stoppers in there that they could find. I couldn't understand why. I saw them bill and they charged me for them; I couldn't believe it. They didn't want to give me the stuff that I had seen in their showroom. They were nice and courteous, but I would be careful. You have to keep an eye on what they are doing. After they were done and fixed it all, it actually turned out pretty nice I have to say. It's just the process I didn't like. He came right out when I went to the showroom.

Description of Work
I used Shunk's Kitchens to have granite counter tops put in.

We wanted to remodel our kitchen - new kitchen cabinents and counter tops. Shunk's representative came and measured everything and also provided several design layouts, including some options we hadn't thought of, and also advised us on our cabinent selections including hardware when we were at their showroom. When installation day came, they showed up on time, did the install and cleaned everything up before they left - all in the planned 2-days. I absolutely love my new kitchen and would highly recommend Shunks!

As an independant contractor, I believe in building it right the first time. I am committed to superior quality and results. I listen to your vision and we turn those visions into reality. We can focus on restoring the past or creating the future from your own concepts. Quality construction. Honest service. Great value. WHL Construction is committed to helping you and your home to have a better relationship. Give us a call today to get a free estimate. (570) 755-1991 William Lamey, Owner  …

Insured
All statements concerning insurance, licenses, and bonds are informational only, and are self-reported. Since insurance, licenses and bonds can expire and can be cancelled, homeowners should always check such information for themselves.To find more licensing information for your state, visit our Find Licensing Requirements page.
General Information
Free Estimates
Yes
Eco-Friendly Accreditations
Yes
Payment Options
Check
Senior Discount
No
Warranties
Yes

We do all types of cabinetry. Kitchens. Baths, Closet systems, Entertainment Centers, Libraries, Offices. We are competitive in all price ranges, we have a style to fit all your needs. We serve Centre County and surrounding areas.

How is SHUNK'S KITCHENS overall rated?

SHUNK'S KITCHENS is currently rated 4.7 overall out of 5.

What days are SHUNK'S KITCHENS open?

No, SHUNK'S KITCHENS does not offer a senior discount.

Are warranties offered by SHUNK'S KITCHENS?

What services does SHUNK'S KITCHENS offer?

SHUNK'S KITCHENS offers the following services: We do all types of cabinetry. Kitchens. Baths, Closet systems, Entertainment Centers, Libraries, Offices. We are competitive in all price ranges, we have a style to fit all your needs. We serve Centre County and surrounding areas.