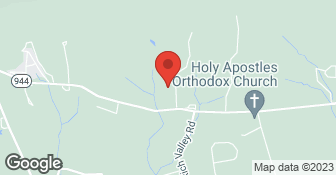 I have many years of hands on experience in various construction applications. My early years of experience come from working a family farm raising beef cattle, wheat, and other crops. My experience includes operation of heavy equipment, track loader, backhoe, dozer, general farm equipment. Further experience includes, almost all variations of welding. Structural steel certified. From heavy steel beam work to delicate ornamental ironwork. All types of construction related work from the roof all the way down to the foundation. I can transform your entire bathroom or kitchen and other rooms as well as install thousands of feet of fence. Pennsylvania Contractor License # 056154 ...

My wife and I bought a house that was flipped by Ashley Home Improvement. It has taken us nearly 6 years to undo the horrible work by Chad and his company. If there was a shortcut, you can sure they took it. Multiple projects in the house were done so poorly that we had to pay thousands of dollars to get them done correctly. For example, they decided that it was a good idea to install an incorrect piece in the drain of the master shower. This ensured that the shower could not drain. The only way to get it fixed was to hire some competent to take out the basin of the shower and do the job right. When they redid all of the duct work, duct pieces didn't fit together and they didn't insulate anything. This meant that air flow in the house was poor AND there was a lot of moisture leaking into the drywall. Moisture + drywall = black mold. Thanks Ashley! Really glad we caught that before we brought a baby home who could've suffered serious health issues by breathing in black mold because you couldn't be bothered to do a job right. I would never hire Chad and his company, even if they offered to do the work for free. Stay FAR away.

Chad was a bit slow on the response initially, but with all the snow we had, it was understandable, just a bit of a hiccup at the beginning. Once he got started, he worked some long days getting all the misc things completed. Even made several trips back to the box store for items I picked up but were wrong. I added a couple of things to his list after he started and he worked them in without a problem. Next phase will be a bigger bite but waiting until the weather warms up as the house will be open during that time. I will continue to use Chad a lot going forward.

Description of Work
A variety of plumbing, electrical and repairs needed throughout the house.

No job was outside hi range of expertise!

Our entire home was completely renovated inside and outside. It is a small style cottage home in the Camp Hill area. I wrote a previous review when they started and now we are at the end of the project. Our overall experience with this company has been nothing short of incredible! The entire team was extremely knowledgeable, experienced, and professional. They went over and beyond to do whatever we asked them to do. The cost of renovations has been extremely reasonable. I want to submit before and after pictures as soon as everything is complete. In fact, we are planning on displaying our home on-line for renovating a small home and utilizing every inch of space with amazing results. In the future we are planning to add a patio and perhaps a 4 Season Room. We definitely want Chad Ashley and the whole team back to work for us again. Without hesitation I would highly recommend this company to anyone.

Description of Work
Renovations of kitchen, bathroom, and the entire home inside and outside. The project included expansion of the bathroom & plumbing, electric, dry-walling, installing wood flooring, installing kitchen cabinetry and appliances, expanding and creating new closet space, painting, replacing outside siding, roofing, and windows.

Work was done efficiently, professionally and with high quality craftsmanship.

Description of Work
We have used Ashley Home Improvement at our church for many years. Most recently they installed 2 solid steel security doors in the church basement. It took a little longer than anticipated for the doors to arrive, but once installation began the job went quickly. The owner, Chad Ashley, is very "hands on" and makes sure his crew does the job as if they were working on their own personal houses.

It came out beautiful because he is a perfectionist. We will continue to use them in the future if the need arises.

Description of Work
We hired them to build a sanctuary.

HL Bowman has been in the same location for 38 years and owned by the same family for over 65 years. HL Bowman is a non commission based company. HL Bowman employees will never upsell you a product you don't need. Dennis and Bryan Enders and his family have deep roots in the Harrisburg community. After 65 years Dennis and family stay committed to giving the community the best possible service and product to fit their needs. HL Bowman has won Angie's List super service award every year.  …

Now is the time for you and your family to stop suffering the effects of continued wet or damp basement problems! With over 30 years experience in the construction field and 20 years in basement waterproofing, Basement Waterproofing Solutions (or BWS) has the expertise to solve all of your basement water problems with reliable service and proven results. Eliminate Musty Odors Stop Mold Growth Reduce Allergies Improve Air Quality Waterproofing Mold Remediation Foundation Repair Insured Transferable Warranty Local References Owner Operated Financing Available  …

Insured
All statements concerning insurance, licenses, and bonds are informational only, and are self-reported. Since insurance, licenses and bonds can expire and can be cancelled, homeowners should always check such information for themselves.To find more licensing information for your state, visit our Find Licensing Requirements page.
General Information
Free Estimates
Yes
Eco-Friendly Accreditations
No
Payment Options
Check, Visa, MasterCard, American Express, Discover, PayPal
Senior Discount
No
Warranties
Ask for details

We offer all types of home improvement services. We do not directly sell any products but we can purchase them on your behalf or point you in the right directions.

Ashley Home Improvement is currently rated 4.2 overall out of 5.

No, Ashley Home Improvement does not offer eco-friendly accreditations.

No, Ashley Home Improvement does not offer a senior discount.

No, Ashley Home Improvement does not offer warranties.

Ashley Home Improvement offers the following services: We offer all types of home improvement services. We do not directly sell any products but we can purchase them on your behalf or point you in the right directions.

Are there any services Ashley Home Improvement does not offer?