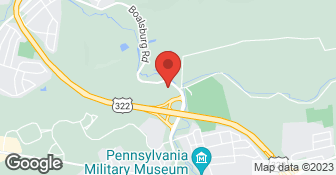 Our technicians are well experienced and trained to handle any situation. When it comes to tree services, we always put our customers first. Our mission is to create a rewarding experience for the client through quality service. If you are having issues with the trees on your property, give Cutting Edge Tree Professionals a call today! Additional DBA - Fuller's Quality Tree Service. Additional email - contact@cuttingedgetreeprofessionals.com. **travel fees may apply**...

Nate and his crew did an awesome job. They parked the crane in the driveway and actually removed the large tree by reaching over the top of the house. The removal and the other work was done in a very professional way. Cleanup was immaculate and we had zero damage to our lawn.

Description of Work
We needed a large and dangerous tree removed from our back yard, the stump removed and two other trees cleaned and pruned. and.

We had to have trees removed because of root rot and related problems. One of them was a huge old oak that Penn State's plant pathology department called a "hazard tree." All of them were in our closely planted, lovingly landscaped native plant garden. There wasn't a lot of room to move - and only a fairly narrow passage between houses to take them out. I was expecting devastation: but Cutting Edge did a fabulous job. One arborist - who's taken care of our trees for years - turned down the job outright, I think because of the difficulty of getting the trees down and the wood out without damage. Another arborist simply said, "There will be damage." A few weeks after Cutting Edge finished, though, you'd barely know they'd been here, except for the missing trees themselves and a big stump that we'd asked them to leave. The owners came out and scoped the property carefully, consulting with us all the way - both during the initial consultation and during the process of removing the trees. They "got" the idea of native plants - which not everyone does. They took great care with everything. When an issue arose - for example, at some point they wanted to temporarily move some small shrubs to get them out of harm's way - they consulted with us. We really appreciated their care in this respect, as well. At some point, they spotted a high-up hollow in another tree and, without extra cost to us, called in an expert to consult. They investigated carefully, described what they'd found, and we were able to agree that the tree should be monitored but nothing had to be done yet. Our neighbors were so impressed with their work that they hired them for some work in their own yard. On top of all that, they were very prompt and very professional. They started and finished the job as scheduled, with one exception: they needed a special piece of equipment to remove one tree without disturbing the flowerbed it stood in, and it wasn't available when they expected. They rescheduled that and came back - again, exactly as promised - and finished up neatly. Throughout the process, they were very professional, considerate, and meticulous. I am truly impressed.

Description of Work
Five diseased trees - one of them a giant old oak - had to be removed from our closely planted and lovingly landscaped yard. A couple of months later, we also brought them in to treat some problems with our hemlock trees.

They got the job done and cleaned up the work area very well.

Description of Work
This company cut down two large fruit trees that had wires running through them. One was very close to the house.

You can just put an "A" down for everything.

They were nice enough. Cleaned up well.

Description of Work
Needed tree branches to be trimmed. They did it and cleaned up well, but the look of the work made me wonder if they really knew how to trim a tree branch. Ragged, apparently randomly placed cuts make me wonder how the tree will be doing in a year.

Service was superb and price was very good. Came to inspect the site and provided a fair estimate along with insurance and other documentation. Service was performed in a timely manner and the crew cleared the debris and left the site cleaner than what they found it. Large trimmed pieces were conveniently piled so I could later bolt and split the wood. I will use this company again for future work.

[Member Name Removed], thank you for the great review. It was a pleasure to take care of your trees. Please let us know if there is anything we can do for you in the future. In your service, Nate
5.0

The main job was a large (75 years old) oak tree that was killed by a lightning strike 2 years ago. I had some estimates from other companies from that summer, but I'd held off on the slim hope that it would survive (sadly, it did not). When I finally accepted that it needed to come down, I saw the Cutting Edge offer on Angie's, read some reviews, and decided to give them a shot. They were quick to respond, and Nate came out to look things over. He was professional, knowledgeable, and thorough, and the estimate was in line with what I'd expected. The actual work was just as professional. They were well-equipped, and staffed with enough guys to get the whole job done that day. They appeared to be very safety conscious, and they were very methodical and careful in their approach to taking down this large tree. The other trees were not as large, but they were near utilities and had to be taken down carefully as well, and there were no problems with that. They were completely accommodating as far as how I wanted the wood cut up (I saved most of it for firewood), and chipped the rest (and at my request left the chips behind on a pile - I'll use them around the lot). Cleanup was meticulous and complete, and I think the grounds look better now than before the job. I'm sorry to lose that tree, and I hope I have no more lightning strikes, but I'm glad that I chose Cutting Edge, and when I need more work done, I'll go to them.

Description of Work
Removed a large dead oak tree (struck by lightening), a large dead tree hanging/leaning over our gazebo, and a couple other trees from the yard.

Hi [Member name removed], Thank you so much for the thorough review. We're happy to hear that you had a pleasant experience with our team. Have a Happy Thanksgiving! Sincerely, Cutting Edge Tree Professionals
5.0

Was able to get them to come out the very next week, and they called ahead the day of planned service (before I needed to leave work) to reschedule for 2 days later due to a delay, I really appreciated that after a bad experience waiting for an appliance delivery. Arrived promptly on re-scheduled day and worked quickly, accomplished project just as they described. Price same as quote. I have my view back! Would hire again.

Description of Work
Cut down two large trees in woods obstructing view, and a few small lower limbs off a spruce tree. Gave me pricing options for leaving felled trees with a few stove length pieces to remove ourselves, or with the haul of wood up hill, chipper for branches.

Thanks for the review, [member name removed]! We're thankful for the opportunity to help provide care for your yard. Let us know if there's any other ways we can serve you or your friends in the future!