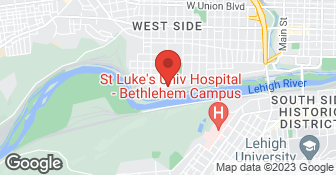 We always call them for our electrical needs. Their prices are very reasonable. This service went just fine.

Description of Work
They installed some GFCIs prior to selling our home.

They were very prompt and were nice guys. I would recommend them.

Description of Work
They did some repair work on my light fixtures. Price is the hourly rate and does not include materials.

I sent an email to this company asking for an inspection and estimate for any work needed. I included my phone number. They never called me, instead, 3 days later I got an email asking for my availability. I told them 3pm or later after I get home from work. Another 5 days goes by and I finally get an email stating that they don't schedule anything after 2pm. I think it's pretty sad that they have hours worse than bankers.

Description of Work
Couldn't get an estimate

Tech repaired inside telephone lines and removed unused phone line connection. Much cheaper than calling Verizon or whoever services the phones these days.

Sadly being on the top of Angie's List is not always a guarantee. I had called another electric company on Angie's List at 4:18pm. Three hours later, I had not received a call from a technician. I called at the two hour mark to get information. The answering service could not give me an estimate on when the tech would even call me let alone arrive at my house. At 7:30, I called West Side Electric because they were located near my home. Their answering service was professional and listened well. In less than 40 min. The owner called to assess my situation. This night was the first frigid night of the new year. My furnace stopped working and I have an asthmatic teen in a house that was increasingly getter colder by the hour. Roger stopped by and listened to the details of the situation. He quickly discovered the electrical issue and corrected the affected outlets and the furnace problem. He also gave me recommendations. We are planning to finish the lower level this year. West Side Electric will be our electrical contractor for the project. Thanks again West Side Electric!

Description of Work
Figured out the problem quickly!

The install on the new chandler and lift system went very well! On time competitive price and a great job!!

Description of Work
installed a chandler lift system and a new chandler.

Westside is outstanding! Everything went very well and as planned and promised! I have used them for several projects and the out come is fantastic! The crew was on time and very knowledgable about the work they do. They take the time to answer your questions and explain why their way may be better no mater how well you may have though it out!! And you know what, they were right and it saved me money as well! Now that's the toy of service crew I want to deal with!!

Description of Work
Sized purchased and installed a whole house back up generator.

Perfect, couldn't have asked for better response. The price was competitive and the scheduling couldn't have been more smooth. The crew showed up right on time and cleaned up thoroughly after the work was done. They did a really nice job making the boxes neat as well. I appreciated the attention to detail.

Flawless from the estimate to the completion of the work. Fair price for extensive work... Punctual...respectful, meticulous ... Professional

Description of Work
Lightning damage to home... Required extensive repair / replacement of outlets and wiring...on 2 floors of my home.

Service call was three days from call.... Prompt and efficient diagnosis of problem... Electricity restored... New outlet and completed in one hour... Doesn't get much better...

Description of Work
Outside outlet caught fire during cleaning of home...half the home without electricity....

Get residential electrical services from experienced professionals with flexible hours at Omega Electric Inc. Our services include, new installations, rewire, repairs, home wiring, service upgrades, pool, spa, hot tub wiring and home appliances or hook-ups. We are I.C.C. Registered, fully insured with honest and up front pricing. Find experienced interior or exterior lighting installation and get top brands like Progress, Kichler, Sea Gull, and Lightolier. Call us and find a live person on the other end of the phone line 24/7! Get peace of mind knowing all of our work is guaranteed. Ask about our electrical work warranties. Financing available for all credit types and income.  …

Welcome to the one stop solution that can handle your project from start to finish without the headache of hiring multiple contractors. We at Massimino Home Improvements are a team of licensed and insured professionals that bring our customers many years of combined experience in electrical, plumbing, carpentry, roofing, remodeling, renovations, cleaning and more. The idea of fair pricing, quality work and honesty is the platform in which we were structured and will continue to focus on for years to come. Call today and speak to one of the owners personally.  …

Insured
All statements concerning insurance, licenses, and bonds are informational only, and are self-reported. Since insurance, licenses and bonds can expire and can be cancelled, homeowners should always check such information for themselves.To find more licensing information for your state, visit our Find Licensing Requirements page.
General Information
Free Estimates
No
Eco-Friendly Accreditations
No
Payment Options
Visa, MasterCard, Check
Emergency Service
Yes
Warranties
No

How is WEST SIDE HAMMER ELECTRIC overall rated?

WEST SIDE HAMMER ELECTRIC is currently rated 4.9 overall out of 5.

What payment options does WEST SIDE HAMMER ELECTRIC provide

No, WEST SIDE HAMMER ELECTRIC does not offer free project estimates.

No, WEST SIDE HAMMER ELECTRIC does not offer eco-friendly accreditations.

Are warranties offered by WEST SIDE HAMMER ELECTRIC?

No, WEST SIDE HAMMER ELECTRIC does not offer warranties.