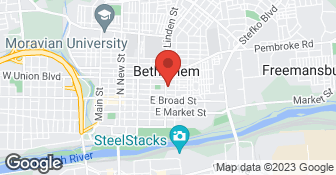 After paying that $1,100 deposit in February of 2013, we routinely phoned him to ask when the work would be performed. He always had a reason why it could not be performed soon. His most common reason for delaying was the expectation of bad weather. After four months of delays, he no longer answered my phone calls. He probably would see my number coming up on his caller i.d. On one occasion, he mistakenly answered, then realizing who the caller was, hung up right away. I called back within seconds and he answered at that point, when I again tried to get him to either give the money back or let us know when the work could be done. If it couldn't be done within another week or two, we definitely wanted our money back. After that, he continued ignoring my calls, which were made at every reasonable time during waking hours. I contacted a lawyer for advice, and it was suggested that we contact the police and treat the situation as an unlawful possession of our money rather than using small claims court, which could easily cost more than the $1,100. After a police officer became involved, Mr. Affatato promised to pay the money back in two parts, using a schedule of half on one Thursday, and the remaining half the following Friday. He made the first payment, but did not make the second. The officer became involved again, and Mr. Affatato agreed to repay the second half on a Tuesday four days later. He missed that deadline, too, so the officer became involved one more time. On Wednesday, September 18, seven months after the original deposit was made to Mr. Affatato, we were finally completely repaid. We're grateful that the police interceded in our case and went to bat for us.

Description of Work
In early February of 2012, we contracted with Michael Angelo Affatato to remove a tree stump and replace some sidewalk concrete in the aftermath of a storm. During the storm, a large tree was blown down and blocked our street. The city removed most of the tree, but the stump remained, and several sections of sidewalk were affected. Mr. Affatato offered what seemed to be a reasonable bid for the work - $1,800 - with $1,100 required as a deposit, and we agreed to hire him. The deposit check was cashed immediately, but no work was ever performed.

Michael did an excellent job although it did take a lot longer than planned due to excessive rainfall which no one could help.Overall very satisfied and his swirl finish is second to none.

Basically the job seemed to go fine until Mr Angelo ran out of mix at the bottom of the driveway. Someone went in a truck for a small amount of mix to finish the job but it was too wet. The surface smoothed out fine but after two years began to fall apart in this area of about 3 sq ft. . The situation worsened after two years or so. Several attempts to get Mr Angelo to repair this have failed. He has made several promises including another promise to me ( in the presence of my wife) to help us with the driveway surface which is is covered with black mold or something like it. He is not a man of his word. It would be nice to see him finally show up and attempt to repair the mess he has left me. You need to see it to know how bad it looks. Every week I go out and pick hp a few more loose stones as the concrete gives way. There were several other minor problems but they are meaningless compared to my major problem which will probably cost me $500-$1000 to have repaired if I ever have this amount of extra money to do the job.

Description of Work
The job involved removal of the old concrete driveway and walkway to the house. These areas were to be replaced with new concrete mix all properly smoothed, trimmed and scored. This he did, although some of the work was done poorly. See the following comments.

Took longer then promised, they were disorganized, and didn't care. you should never question any of them-father or sons-"like father," like sons,". The father told me stories about how if he did not like what a customer said to him, he's gone to their home after completeing a cememt job and tore it up with a sledge hammer, and believe me-he wasn't kidding! He's like a Tony Supprano type guy, only shorter and definitely chunkier! Hope I don't wake up to a horsehead at the foot of my bed tomorrow morning! On a more serious note, he is irresponsible, rarely to never shows up on time, and most of the time he won't show up at all, nor will he bother to call to reschedule with you or God forbid-apologize! He wants & has to expect that you will do what is "expected of you." To Run & chase him down! That price tag starts to seem so not worth it anymore once you catch on to this guy, and believe me-it doesn't take long to figure this one out. The job he did complete around our pool is cracked badly across 2 large slabs-so we contacted him & of course he-never showed up to fix the problem-said he would, but never did. Now what....Well unless I can find someone reputable who doesn't mind going over someone else's poor workmanship, I'm still out the $$$$. Def. do not want this guy as untrustworthy as he is anywhere near my property with that sledge hammer of his! Now the jist of this experience is-yes we paid I believe a substantial amount less than other Contractors were offering, which is how he keeps getting new customers-the old ones certainly do not return or refer. So you spend a little less initially until his sloppy work is done. He's way too much maintenance for him being the Maintenance Man (with or without his sledge hammer)......Anyone considering this group of so called "Professionals", think 1, 2, 3 x, then think again! Then RUN FORREST RUN-OR JENNY, RUN, RUN ANYWHERE, JUST RUN, RUN, RUN, AS FAR AS YOU CAN AND NEVER LOOK BACK AT THE VERY SHORT MAN WITH HIS 2 SONS AND A SLEDGE HAMMER.....Oh, and my Husband had to clean up properly-never finished, always left a mess, only took what he needed to start another job and left the rest sit at our house.

Description of Work
The cement slabs around our in-ground pool needed to be replaced as they were badly damaged. Michael Angelo and his sons did the entire cement work around my in-ground pool. The payment terms were set up to pay him as he advanced-$1500 divided into work segments. The total job was $4,750 and he was paid in full and on time.

We are a Family Owned business. We do Concrete, Cement, Stone, Brick or Block. Checkout our Website hollandmasonry.doodlekit.com We Love to do Retaining Walls. We also do Sidewalks, Steps, Driveways, Patios, Brickwork, Stucco, Stone veneer, Basements & so much more! Call for Free Estimate in area codes: 610, 215, 570. Not in these areas? Call anyway. 610-377-9603  …

Michael Angelo & Sons is currently rated 2.3 overall out of 5.

No, Michael Angelo & Sons does not offer eco-friendly accreditations.