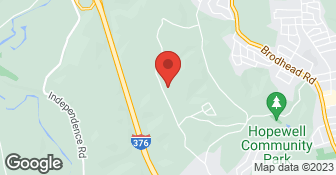 Bradley Painting is a family owned business, owned and operated by Kristian Bradley. We provide a variety of services for our clients including free estimates....

13 YEAR SUPER SERVICE AWARD WINNER!! PLEASE CALL INSTEAD OF MESSAGE so that we may get back to you promptly (412) 487 1133 We have 35 years better business bureau A+ rating. Kosta Painting and Refinishing Co. has been proudly serving Western Pennsylvania for over 30 years. Please call We take great pride in providing quality service with fair and reasonable pricing. We have painted thousands of homes in Western Pennsylvania and are happy to provide references. Chances are, we have several references within a few miles of your house! All of our materials are of the highest quality. If you are not sure which colors are right for you, don’t worry. We have qualified professionals who can utilize computer technology of today to match, virtually, any color you wish to use. So, why wait! Feel free to contact our offices for a free estimate for whatever project you have in mind. We provide onsite estimates with referrals and satisfaction is 100% guaranteed! Having the best workmanship and material warranties in the business, you cannot go wrong with the "Doctor of Painting & Refinishing" !! Mention you are a angies list member and get a 10% discount  …

Fully Insured/Fully Licensed-PA#105542-Full-service general contractor for both commercial and residential properties. No job too small or too big for our quality services. Abracadabra Contracting employs skilled technicians in all services. Limited subcontracting services utilized for specialties such as: roofing, HVAC, extensive electrical, and plumbing. Our expertise is lead by ownership with over 30 years experience. Call us today with your project so that we can help guide you and plan to expedite your project(s) properly and exceed your expectations.  …

B Squared Painting Plus

B Squared Painting Plus, established in 2017, prides itself on attention to detail and a quality customer experience. We're committed to providing professional, timely services to meet all your painting needs: interior, exterior, residential or commercial.  …

Horrible experience. Job was not completed due to us firing him to avoid further damage to house that will need to be repaired. Do not pay upfront as requested or you will be sorry. Very bad attendance and poor quality work. Do not fall for his empty promises. Carpentry work is poor at best and what did get painted on my house will need to be redone. Agreed to everything we asked about and did nothing close. We got taken big time. Do not use this contractor.

THIS GUY IS A SCAM. Everything on here is correct. He will always ask for money, he does a poor job and he won't finish the job. This guy chipped a corner of my cement porch off asked me to buy the cement to fix it then never showed and took the cement. I was going to sue, but was advised by a lawyer that it wouldn't be worth it because he probably wouldn't show up to court. This is my only opinion is to make sure no one else falls for this guy's bs. Now I have a railing that shakes, a corner missing out of my cement and the cement I bought stolen. Stay away from this guy and put this scam artist back flipping burgers.

An experience I'd rather forget. A 2 DAY job took over 10 days and still not completed. Lied and dramatic. Immature and no where near a professional. Similar to other reviews on Angie's list request for an advance and never returned. Said he'd send a 'helper' who never showed. I had saved for years to have this job done and it was emotionally draining and exhausting and frustrating beyond humanly capable of dealing with. How does a consumer 'fire' a contractor who does not return to finish the job? Stay clear of this con artist boy.

Description of Work
He caused me a lot of aggravation with no shows and a job that looks like a 5 year old attempted. Never completed and I had to hire another painter to do the job again so this experience cost me to Bradley the 50% down payment and a $200 'advance' with a sob story to and he never returned PLUS the cost of the 2nd painter. AVOID at all costs. Tell your friends and families and even your enemies.

He was constantly late or just didn't show up. Always had an excuse (car trouble) etc. Running joke was "I'll be out next week" was supposed to complete staining of a deck as well as finish painting poorly installed doors and paint hallway and high ceiling. Never showed up despite repeated promises of coming out. Actual work that was done was average at best. We had to get a friend to touch up a lot of the painting and complete the ceiling.

In Late July I Met Mr Bradley and received a quote to complete a small paint job at my home. After several attempts over 2 months to schedule the job and several excuses as to why he could not, I requested that he return my down payment. He has yet to reply. I contacted the BBB in an attempt to push him into returning the money. He refused to reply to them as well. complaint #10252425 "The company failed to respond either to you or the Better Business Bureau to the complaint filed, and so the BBB has closed the complaint."

Description of Work
Mr Bradley quoted a price for service and asked for a down payment to purchase material.

I shipped you a check in the mail months ago. You never responded back to me. If you have the check great. If not then you need to inform me so we can make this right. I'm not in the business of taking your money.
1.0

Project was quoted at 2 weeks. Finish date was supposed to be September 14. We fired Mr. Bradley on October 26, 7 weeks into a project that was supposed to take 2 weeks. As of that date: ? None of the trim was painted. There is a lot of trim. ? Most of the walls only have one coat even though we were told we were getting two. There are small bare spots that can only happen with one coat. Plus, we can see most roller marks and cut lines. ? Almost none of the windowsills are done. They are supposed to be plastered, caulked, and painted. ? There are paint marks on several ceilings including the foyer, which we cannot reach. ? There is one room with only 3 walls painted and a bathroom that has not been painted at all. ? There is paint speckled on our brand new hardwood floors near numerous walls. Very small specks but many of them. On October 24, we offered that if he completed the project within 7 days (October 31), we would pay him the balance owed ($550). If he did not meet that deadline, we wanted half of our money back. (Would have been about $1,900.) Mr. Bradley would not commit to this agreement stating that over half of the work was done so he would not give back half the money. However, this was a 2 week job and we were giving him 7 days. If it was over half was done, 7 days should have been more than enough. The other reason that he would not commit was that he had other jobs he was working on. These jobs were taken after ours. We made all payments according to the terms in his contract. In fact, he requested half of the final payment early as he was having car trouble. After that payment he only showed up to work one day out of the next two weeks until we fired him. He had a sub work for about 4 or 5 hours over those 2 weeks as well.

The paint marks are not from me sir. Everyte you were there did you not see a drop cloth. I gave you an estimate for my crew to go in and paint your house. Did not want to pay te money. So I lowered my price and gave you estimate for just me to paint. I informed you it would take longer. I am one person and can only paint so fast. You said there was no problem. I saved you about $700 dollars on paint by giving you the paint for what I get it for. Had two weeks when flooring people where in your home. I cannot work when they are ripping the floor up. I'm in their way and they're in my way. I owned up to my guy not producing work and fired him. That was not your responsibility I understand that. So when the two weeks go by I have other jobs that need completed so I bounced back and forth and had my guy at your house when I wasnt. I would have loved to come back and finish but not with you swearing and telling me what is going to happen like you own me. You violated the contract by tearing holes in the walls I already painted and then ordering me to fix them. And by having the flooring guys their I had to come back when I was available. I would still come back.the work has been done for the money you gave me. You want 200$ back I will give you $200. But I'm not giving you half the money back when more than half the work is done.